The head of one of Australia’s big four banks says the company would be happy to help with the vaccine rollout ahead of reopening international borders, as the business sector faces challenges without seasonal workers and international tourism. 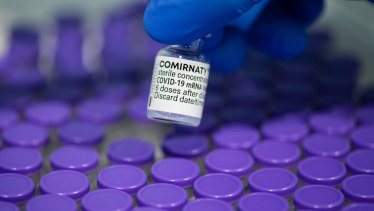 The vaccine rollout is key to reopening Australia.Credit:Getty

“We would ultimately like vaccinated Australians to be able to do that without the need for hotel quarantine of 14 days when they return,” she told 2GB radio on Friday morning.

“Ultimately the states and territories will have to work that through in their own systems with their own health authorities to determine what is possible.

“It is, though, good to be optimistic about this and it’s certainly a different position from where we were this time a year ago.”

NSW Premier Gladys Berejiklian said on the Today show restarting international travel or moving to home quarantine depends on the majority getting vaccinated.

“The vaccine is key to us living a more normal life with COVID,” she said.

“NSW is losing around one and a half billion dollars every month because our international borders are closed. But aside from that, there’s obviously the human aspect, just to be able to make choices about how you live and where you go, and they will be issues that we can address once the majority of our citizens have access to the vaccine.”

The NAB’s Mr McEwan said there were three main priorities for businesses: having a national plan for living with the virus and ending snap lockdowns, reopening international borders, but most importantly, getting the vaccine program rolling.

“Last week as I had my flu shot at work, I was considering how large employers like NAB could assist with the rollout of the vaccine. We would be happy to do so at the right time,” he said.

“What they’ve said is they thought the original plan was far too optimistic, so they’re not surprised,” he said.

He said business owners want to see a plan for borders reopening that minimises the risk that the country will be thrown back into lockdowns.

Labor leader Anthony Albanese said the vaccine rollout was a shambles, and more than 40,000 Australians remain stranded overseas, despite a government promise to have them home by Christmas last year.

“With the vaccine rollout, we have emergency service workers and people looking after sectors like aged care who can’t even get the vaccine and don’t know when they’re going to have access to the vaccine,” he said in Brisbane.

“We have GPs in this local community who don’t know when they’ll get vaccines, how many they’ll get and what the timetable is.”

Mr Dutton said the federal government was keen to help get more Australians home as quickly as possible, but it had to be done in a safe manner.

“If we are having a situation where people are coming back and bringing the virus back with them, then we will see community transmission,” he said.

“But if we can get people away from hotel quarantine into home quarantine and people do the right thing, then you can scale up the numbers obviously much more significantly than if we are just relying on hotels.”