Bournemouth boss Eddie Howe said his side went into half-time of Sunday’s remarkable 4-1 win over Leicester with their survival hopes “as bleak as they could be”.

The Cherries were six points from safety in the as-it-stands table with just nine points remaining after a toothless 45 minutes which saw Jamie Vardy’s goal give Leicester the lead and star defender Nathan Ake come off injured.

But an incredible two-minute spell saw Howe’s side take the lead and Leicester go down to 10 men, with striker Dominic Solanke finally scoring his first league goal for the club.

Two more goals saw Bournemouth win a Premier League game after trailing at half-time for the first time in 28 attempts to leave them just three points from safety.

Howe told Sky Sports “We had to find something, have no fear. We did that right from the off in the second half and it vastly improved our performance.

“The goals always change games and we haven’t scored enough of them recently. It was probably the first time in a long time where we’ve had some luck.” 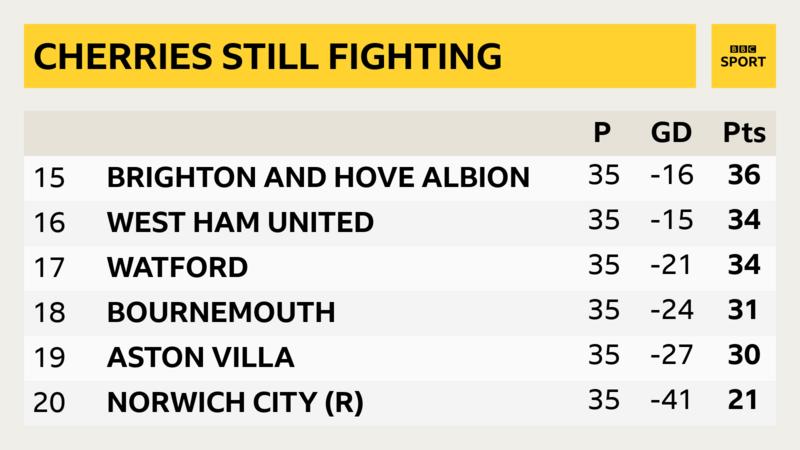 Howe’s side certainly had some luck as Leicester imploded. First, Foxes keeper Kasper Schmeichel hit a goal-kick into the back of team-mate Wilfred Ndidi, who then fouled Callum Wilson for a penalty which was converted by Junior Stanislas.

Schmeichel then spilled Solanke’s shot into his own net 101 seconds later, with Caglar Soyuncu shown a red card for kicking Wilson as they battled for the ball in the goal.

A Jonny Evans own goal and a second for Solanke – from another Leicester error – means that Bournemouth are within sight of safety.

Howe told BBC Radio 5 Live: “I felt we needed to win today for sure. We will try and win every game.

“We are still in it and can still survive, It will be very difficult but we’ve shown our supporters we are in there fighting and that’s all we can do.”

Solanke, 22, had not scored for the Cherries in 38 Premier League appearances before Sunday, and scored more goals in 20 minutes than he had in all competitions since May 2018.

Howe says he always believed the £19m signing from Liverpool would come good.

“I thought he was very good,” Howe said. “He took his goals very well, both showed his qualities.

“I always believed Dominic is going to be a massive player for us in the future and that will do his confidence the world of good.

“Dominic is a very unique player, he has attributes we really like and value and I think he’s done very well mentally to make sure outside noise doesn’t affect him.”