A gallant New Zealand Warriors have repaid the faith of their spiritual Australian home with a win that has put the top-four aspirations of the Newcastle Knights on life support.

The Warriors have worn the Tamworth postcode of 2340 on their jerseys all season to thank the community for taking them in when they first went into quarantine in Australia. 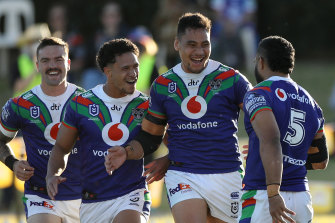 George Jennings’ try was just one of many reasons to smile for the Warriors in Tamworth.Credit:Getty

They move up to 14 points, just two behind the sixth-placed Sharks, who were in action immediately afterwards against the Cowboys. Regardless of that result, the two sides meet in round 18 in a match that could well define both of their campaigns.

Newcastle weren't able to trouble the scoreboard in the second half but that wasn't a problem for the Warriors, who only grew in confidence as the match continued. Peta Hiku set up a pair of tries with flick passes and everything they touched seemed to turn to gold after the break.

Three were any number of highlights but none better than Tuivasa-Sheck turning Knights halfback Mitchell Pearce inside out near his line. The skipper drifted across, sized up his defender then left him grasping at air with a sensational left-foot step. It was brutal. 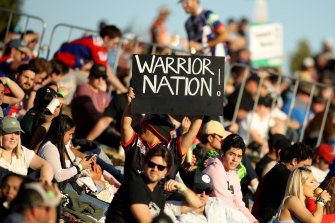 A fan pays tribute to the Warriors in their adopted northern NSW home.Credit:Getty

After that, they were lining up to get in on the act. Adam Pompey produced a fingertip touchdown in the corner before George Jennings, Tuivasa-Sheck and Jazz Tevaga completed the procession.

In a season of turmoil, coach sackings and horrible social media abuse, the Warriors are becoming the feelgood story the game has needed. Should they bullock their way into the finals, the story will only get better.

Sports news, results and expert commentary delivered straight to your inbox each weekday. Sign up here.