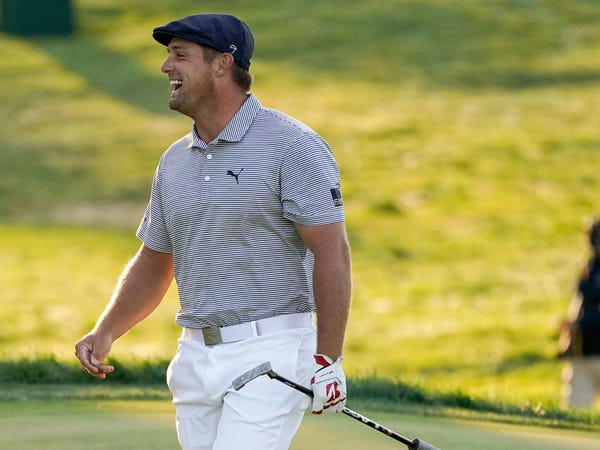 It was a dominant performance by one of the most compelling figures in golf, whose bombing drives and bombastic attitude have driven the golf discourse all season.

DeChambeau entered Sunday just two strokes off of leader Matthew Wolff. After Wolff dropped a few strokes early in the final round, DeChambeau took hold of first and never looked back.

At the par 5 No. 9, DeChambeau sunk a jaw-dropping eagle that all but sealed his first major victory.

By the time he reached the 18th green, DeChambeau already had his victory locked up, but he still capped off his round with an impressive par save.

Heading into the weekend, there were questions about whether or not DeChambeau's game could translate to the test of the U.S. Open. The tournament prides itself in punishing players for its mistakes, which seemed to fly in the face of DeChambeau's strategy of pounding a course into submission.

But Bryson was unphased, finishing the tournament at six-under, winning the tournament by six strokes as the only player to shoot under par. According to the broadcast, DeChambeau set a record for the tournament, hitting just 23 of 56 fairways in regulation, the lowest of any U.S. Open champion.

Despite that statistic, what's most impressive about DeChambeau's performance was how well-rounded he was. Yes, his bombing drives did the heavy lifting in getting him in range of the greens, but Bryson's approaches and putting were both also near the top of the field throughout the weekend.

Far from a one-trick pony, DeChambeau was the best all-around golfer in a tournament filled with them, and the only player to not play a single round of the tournament over par.

DeChambeau's style might have been controversial when he debuted his new body this season, but after his win at the U.S. Open, his methods are undeniable. The next major may not be far off.