Federal cabinet minister Karen Andrews says she agrees with Prime Minister Scott Morrison that he could have handled the ongoing furore around the treatment of women in politics “a bit differently.”

Mr Morrison has been under intense pressure over how the government responded to the case of Brittany Higgins, a former Liberal staffer who says she was raped by a colleague in the office of Defence Minister Linda Reynolds in March 2019. 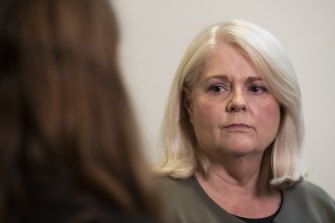 Karen Andrews admits the PM could have handled the recent accusations of sexual assault in Parliament House better.Credit:Rhett Wyman

The Prime Minister gave a tearful news conference on Tuesday morning in which he made a number of concessions for the first time since the scandal broke. But Mr Morrison became hostile under questioning by Sky News political editor Andrew Clennell and warned him he should “be careful”, claiming there was a complaint against News Corp “for harassment of a woman in a women’s toilet”. News Corp has since said there is no complaint before the organisation.

“The last month, in particular, has been horrendous for me, for many other people here in Parliament House,” Ms Andrews told the ABC’s 730 on Tuesday night.

“There have been issues festering for quite some time.”

“I’ve had a number of discussions with him and I know the position that he’s coming from, so I know that in his heart he has always been very supportive of women.

“He’s acknowledged this morning that maybe he could have done things a little bit differently, I think that’s probably fair comment but good on him for saying that.”

Ms Andrews, the Industry and Science Minister, said when she was elected to Parliament a decade ago, she was horrified by the “strong drinking, partying culture” she witnessed upon her arrival in Canberra.

She said she promised her husband she would never embarrass him, “and I made the decision that I would just not socialise.”

But she said this had led to her feeling excluded from important decision-making meetings.

“Many women here do feel quite socially isolated – we aren’t included in many of the discussions that happen whether that be in relation to matters that are being debated, in my case in the House or more broad discussions about policy issues, simply because we aren’t in other people’s offices socialising,” Ms Andrews said.

“I think the men in Parliament need to make sure that they are including women in those conversations.

“It is quite exclusive.”

Meanwhile, a female Liberal member of the NSW upper house, Catherine Cusack, claimed on Tuesday night the federal women MPs were “furious and embarrassed” but not speaking out due to “party loyalty.”

“I have personally passed my tipping point. I can’t defend the indefensible,” Ms Cusack said.

“If he (Mr Morrison) empowers his female MPs to publicly state their thoughts – then we have the revolution we need.”