CADBURY’S Orange Twirl is coming back to the UK – and 10,000 will be sold online next week before they hit the shops.

The popular chocolate bar went down a treat when it launched as a limited edition product last September. 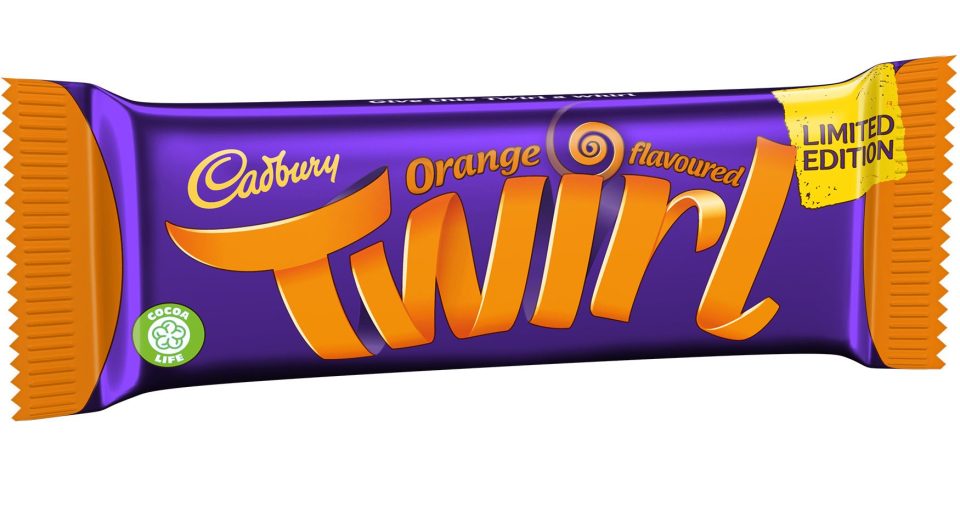 It was so popular that some fans struggled to get hold of one – with some joking that it “doesn’t exist”.

They were also being flogged on eBay for a whopping £700 a case.

If you didn’t try on the first time round, the good news is that they’re coming back on sale from next week.

Cadbury is launching an official Orange Twirl pre-sale online, where 5,000 of the bars will go on sale on August 18.

The pre-sale is being held on the official Cadbury UK Twitter page.

To get a place in the queue, tweet Cadbury with the hashtag #TwirlOrangePresale when the pre-sale goes live at mid-day.

The first 5,000 people who do this will get access to the pre-sale.

These Cadbury fans will then be sent a unique, single-use redemption code to claim their Orange Twirl bar.

Customers can only buy one Orange Twirl bar each – but Cadbury has teased that fans will get some surprise "collectibles" to go with their order.

The bars will cost 69p – which is 4p dearer than last year's recommended retail price – and Cadbury says it won't be charging for postage.

Orange Twirls will then be available in stores from mid-September, although Cadbury hasn't given an exact date.

We've asked for more information, as well as a list of which stores will sell them, and we'll update this article when we know more.

The Sun is also checking what "collectibles" Cadbury will be sending out, and to how many people.

Shops can set their own prices, but last year the bars sold for between 50p and 60p at Asda, Morrisons, Sainsbury's, and Tesco.

Cadbury says it's produced more Orange Twirls this year – although it hasn't given an exact figure.

If you didn't get a chance to try one, Cadbury Orange Twirl is the same as its regular Twirl bar but with a zesty orange twist.

Cadbury has confirmed it's using the same recipe as from it's original launch.

A regular Twirl bar, which first hit shelves around 35 years ago, contains 228 calories and 12.4g of fat.

Radhika Pai, brand manager for Cadbury at Mondelez said: "We are very excited to bring limited edition Twirl Orange back in the UK after the positive response it received last year.

"It was clear our fans loved Twirl Orange, so we wanted to give people more chances to enjoy it, especially anyone that missed out last year."

The Sun spoke to one lucky dad who managed to find a THREE-fingered Orange Twirl in B&M.

Here's everything you need to know about what happened when Cadbury first launched Orange Twirl.