Cate Blanchett knows. When the most gifted dramatic actor of her generation wants to do comedy, her destination isn’t a Hollywood comedy. It’s the tiny Documentary Now! series, a loving and ludicrous satire of classic non-fiction films that feature an absurd wit and impeccable detail. Having previously played imperious performance artist Izabella Barta in Waiting for the Artist (a send-up of Marina Abramovic: The Artist is Present), Blanchett now returns as a salon assistant from England’s north for Two Hairdressers in Bagglyport. 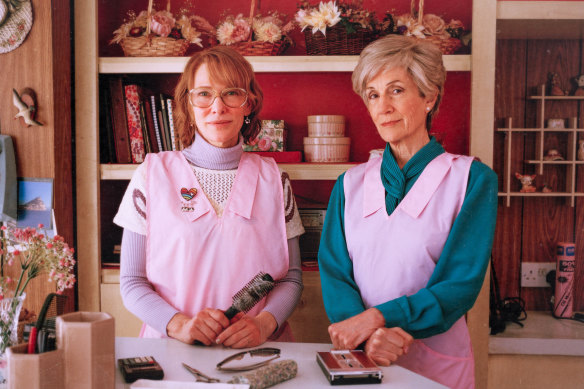 Cate Blanchett (with Harriet Walter) is a salon assistant from England’s north in the absurdly satiric Two Hairdressers in Bagglyport.Credit:Will Robson-Scott

Whether sweeping hair at Salon de Edwina or remembering her late husband, overly confident bricklayer Kevin, Blanchett is exacting – she never winks at the audience. Written by Seth Meyers, Two Hairdressers may be mocking the 2009 Vogue documentary The September Issue, with Harriet Walter as a rollers and tea version of the demanding editor Anna Wintour, but it also works as a note-perfect imitation of a 1996 BBC documentary and a genuinely affecting portrait of female companionship.

This is the fourth season of Documentary Now!, which was created by Saturday Night Live alumni Meyers, Bill Hader, Fred Armisen, and director Rhys Thomas, and if anything it’s getting sharper and more seditious. The two-part Soldier of Illusion, with Alexander Skarsgard as an obsessive German filmmaker and August Diehl as his deranged leading man shooting a cheesy Hollywood sitcom in the mountains of 1980s eastern Russia, has a hysterically dry wit. Who knew a hair and make-up test was vulnerable to bear attack?

Do you need to have seen Burden of Dreams, Les Blank’s compelling 1982 documentary about the combative relationship between director Werner Herzog and actor Klaus Kinski during a calamitous shoot on the Amazon River, to appreciate the satire? Absolutely not. Written by John Mulaney, Soldier of Illusion is funny in its own deadpan right: the characters are blithely outlined, the set-up is tempting, and the escalating setbacks are laugh-out-loud funny. A sociopathic German actor can be amusing in any comic context. 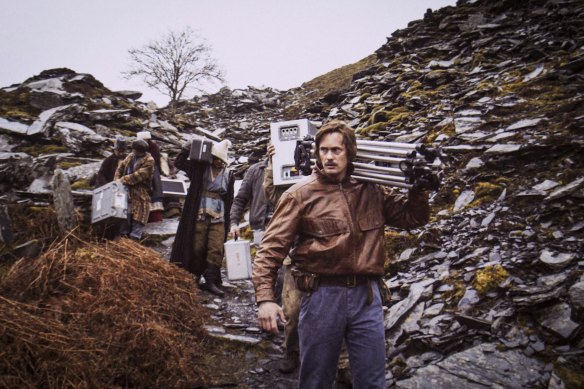 Essential to the viewing pleasure is how dedicated the show is to each bit, whether it’s having a poised Helen Mirren introduce every episode as if Documentary Now! is a real show, or the archival impersonation that brings to life a bloody sheep pen struggle in 1974 Wales as How They Threw Rocks, a homage to the 1996 Muhammad Ali title fight documentary When We Were Kings. Truth may be stranger than fiction, but with the affection and invention that underpin these six episodes, fiction can equally be funnier than truth.

Is the state of comedy a laughing matter? Meta enough to matter, this Hollywood sitcom about the reboot of a hit Hollywood sitcom both sends up and profits from the generational divide in humour as an edgy Millennial filmmaker, Hannah (Rachel Bloom), successfully pitches a new version of Step Right Up, a cheesy turn-of-the-century half-hour, which will bring back the original cast but add realistic wrinkles.

Keen to work, the likes of Reed (Keegan-Michael Key), Bree (Judy Greer), and Clay (Johnny Knoxville) sign back on, despite their considerable baggage. But what no-one expects is the return of the show’s creator, the wealthy, wisecracking Gordon (Paul Reiser). His old-school Baby Boomer ways are ludicrous, but they get some laughs – as do his debates with Hannah about what works both on the show and for them personally. 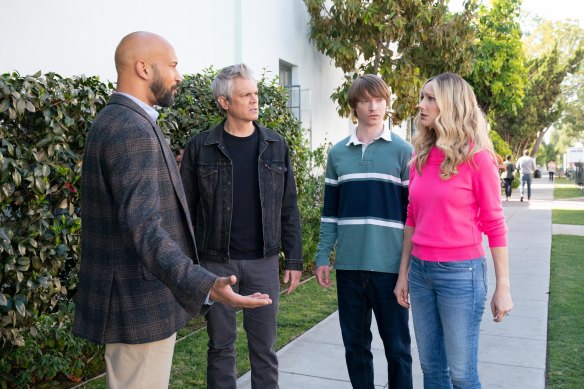 Reboot creator Steven Levitan, availing himself of language and scenarios that would never have played on his long-running hit Modern Family, weaves together industry satire and narcissistic actors with a deft touch. The early episodes haven’t quite found their sitcom sweet spot, but the best lines land. Describing the timeline for a Hollywood actress over 40, Bree says, “grandma, playing a judge on Law & Order, death!” 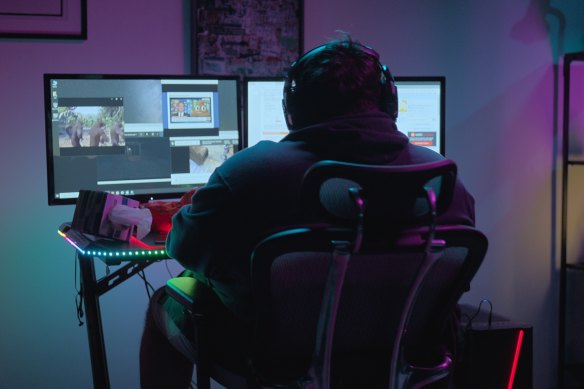 The three-part documentary reveals the financial market turmoil in 2021 when an army of retail investors marshalled online bought shares in the American retailer GameStop.Credit:Netflix

A jaunty explainer told with unchecked YouTube editing, this concise three-part series examines the financial market turmoil in 2021 when an army of retail investors marshalled online bought shares in the American retailer GameStop and used market euphoria to break a group of Wall Street hedge funds that had bet against the stock. It’s irreverent but informative, explaining “meme warfare” and investing basics, but also establishing an underlying truth: many of the retail investors were children during the 2008 Global Financial Crisis who now hungered for revenge against the financial establishment. 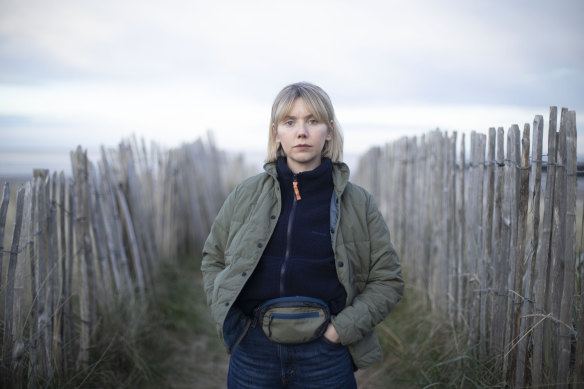 Adapted from the first novel in celebrated Scottish crime author Val McDermid’s series about a female police detective, Lauren Lyle (Vigil) plays the titular Fife investigator, who is put on a 1996 cold case when a podcast stirs up attention about the unsolved death of a local barmaid. The mechanics of the case rattle along, with multiple suspects and a flawed original investigation, but it doesn’t get bogged down in grim anti-hero tropes. Lyle’s Karen is smart, dedicated, and occasionally flawed – hopefully this is a series that returns for more seasons. 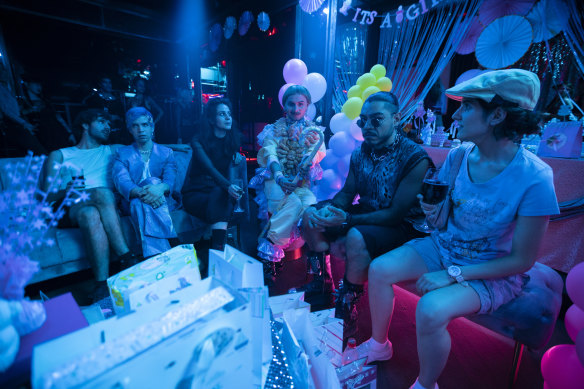 Los Espookys is a homage to classic horror films.

HBO’s tiniest success continues to blaze a distinctive path with its first new episodes in three years, following a group of disparate young pals in a Latin American country whose love of horror has become an eccentric business. The show is a deadpan character comedy, a homage to classic horror films, a telenovela satire, and a paean to friendship – it is ludicrously funny with a straight face and some exceptional fake blood. And you can binge the first season in less than two hours. 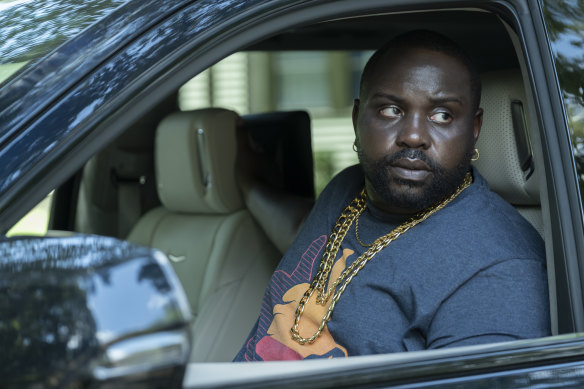 A reminder: Atlanta is one of the, oh, 10 best shows of the last 10 years. So even if the third season – a European vacation for Donald Glover and his castmates that was not so fun – stretched the show’s conceptual daring and sombre realisations too thin, the fourth and final season has quickly attained an exceptional pitch. With its tunnels into netherworlds and scathing satire, Atlanta is now on a rarefied frequency, but the talent involved are making episodes that absolutely hum. The gravitational centre is Bryan Tyree Henry’s rapper Paper Boi – his performance has a profoundly bittersweet self-awareness.

Find out the next TV, streaming series and movies to add to your must-sees. Get The Watchlist delivered every Thursday.