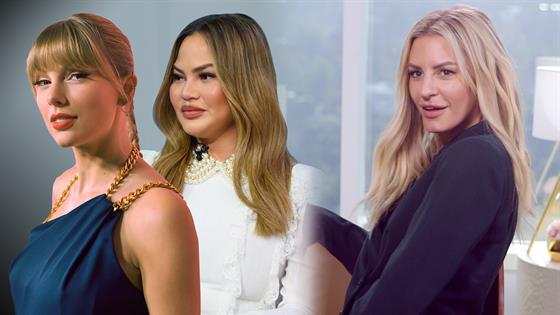 Chrissy Teigenand Chris Klemens are the gifts that keep on giving.

The time for Chrissy and Chris to exchange goods has come and gone, but the pair continue to give their fans the content they deserve. Since Chris is a YouTuber, with 1 million followers to boot, he’s able to offer a behind-the-scenes look at his interaction with the chef and Twitter queen.

On Thursday, he uploaded a 17-minute long video that details how a simple tweet led to one of the most memorable moments of his life.

The saga, as Chris calls it, began on Monday afternoon, with Chrissy tweeting she was in need of lettuce. Obviously, Chris responded with a selfie of himself and the goods, which he records against the warning of his friend and roommate Andrew Lowe. “Andrew told me not to film, because it might set me up for a letdown.” He says to the camera,” Or it’s setting me up for a trending video, dare I say.”

He’s quick to add, “This will probably get deleted.”

But alas, the footage isn’t deleted because Chrissy accepts his offer, prompting Chris to partake in a celebratory edible.

This turns out to be the wrong move, because the YouTuber later has a real craving for a double-decker cheese sandwich, only to realize he offered the last of his romaine lettuce to Mrs. Teigen. He quips to the camera, “What the f–k do I do now?”

Ultimately, Chris takes one for the team and eats his sandwich sans romaine.

The day finally comes and Chris is pumped. “I think this is going to be honestly so fun and it’s not just because I haven’t had human interaction—besides Andrew—for 10 days,” he tells the camera.

The trade is made, but much of his talk with Chrissy and husband John Legend is left out because as Chris explains, “it felt weird to be blogging while four of us were just chatting and shooting the s–t.”

He does reveal that Chrissy said his romaine lettuce was some of “the best” she had ever laid her eyes on.

As for the baked goods and other foods Chrissy and John gifted them, Chris and Andrew passionately ate the food and say it was so good it was bad, because “we’ll never have this again.”

To fully understand their experience, check out the video above!

For the latest updates on the coronavirus pandemic and for tips on how to prevent the spread of COVID-19, please visit The Center for Disease Control and Prevention at https://www.cdc.gov.