Matthew Wood has been trying to work out what to tell his children after he was locked out of his job as a Coles warehouse worker without pay for three months over summer because of an industrial dispute that will eventually claim his job.

"They don't deserve deserve to be thinking about 'why did Daddy's company steal Christmas away from them?'," says Mr Wood, 37, a father of four. "I've had to cancel holidays. Christmas definitely isn't going to be what it was planned to be". 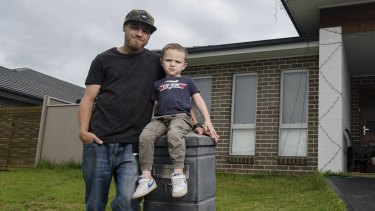 Matthew Wood with his son at home in Sydney.Credit:Rhett Wyman

The Coles Smeaton Grange distribution centre on Sydney's southern fringe will be closed around 2023 and replaced by a high-tech automated warehouse with robots performing most of the work now done by humans.

It is part of a wave of automation sweeping the warehousing sector and the relatively well-paid, highly unionised blue collar jobs it offered in some of the "sheds" that dot industrial suburbs as the retail sector grapples with the challenge of online shopping.

At Smeaton Grange about 350 workers have been locked out until February after they went on strike to push for higher wages and rights to more redundancy pay when the site eventually shuts down.

Data collected by Australian Catholic University researcher Tom Barnes for the United Workers Union shows the prospects for warehouse workers who lose jobs to automation are not good.

Dr Barnes' surveys of former workers from Woolworths' now-shuttered Hume distribution centre in Melbourne show about a third were unemployed in August this year after the centre closed at the end of 2019.

Those who did find work suffered a 59 per cent fall in their wages on average.

Compared to the shutdown of Australian car manufacturing, which he has previously examined, Dr Barnes said "the outcome is similar but worse for these workers". 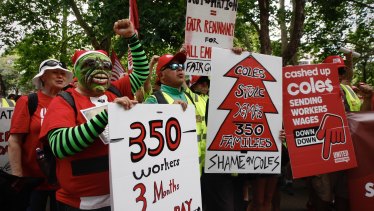 Coles' chief operations officer, Matt Swindells, said the company had come to the workers early with its best and final offer of an annual 3.5 per cent wage rise – double what the Fair Work Commission gave minimum wage workers this year – to try to avert conflict.

It also offered workers two weeks' redundancy for every year worked up to a maximum of 80 weeks, well above the award maximum of 16 weeks.

Coles warned workers it would have "no choice" but to lock them out if they went on strike in the lead-up to Christmas because it needed to set up alternative arrangements to make sure goods got to Christmas lunches on time, Mr Swindells said.

"You can imagine establishing alternative operations for distribution centres through Christmas isn't something you can turn on and off easily, we'd have to plan it properly and it takes weeks to set up and weeks to run down," he said.

The union decided to go on strike in November and the lockout is set to run until February 11.

If the workers agreed to Coles' terms, removing the risk of further strikes, Mr Swindells said the company would be eager to welcome them back.

The United Workers Union has accepted Coles' offered pay rise in principle, but continued to bargain for five weeks redundancy per year worked up to a maximum of two years' payout.

The union's national secretary, Tim Kennedy, said the workers wanted a "just transition" to help them retrain, or for older workers to retire.

"For those who have worked 20 plus years with Coles through floods, bushfires and a pandemic, a two year redundancy is more than reasonable," Mr Kennedy said.

A Woolworths spokesman said it had offered its Hume workers a five year transition period including counselling and courses on applying for new jobs along with "generous redundancy packages". That included five weeks pay for every year of service up to a maximum of 82 weeks.