COVID-19 was first detected in Wuhan in December 2019, and Chinese authorities shut down the region in late January in a bid to contain COVID-19. While the measures were noneffective, with the coronavirus spreading rapidly across the planet infecting more than 780,000 people, the area is still under lockdown.

Now, NASA satellite images have revealed how the nightlife in Wuhan, which is home to 11 million people, has changed following the lockdown, with a distinct change in energy usage.

The image from February 4 shows how highways and metropolitan areas grow dimmer after the lockdown.

Miguel Román, director of the Earth from Space Institute at USRA and a principal investigator of the “Black Marble” research team, said: “The lights provide a different perspective on human settlements. 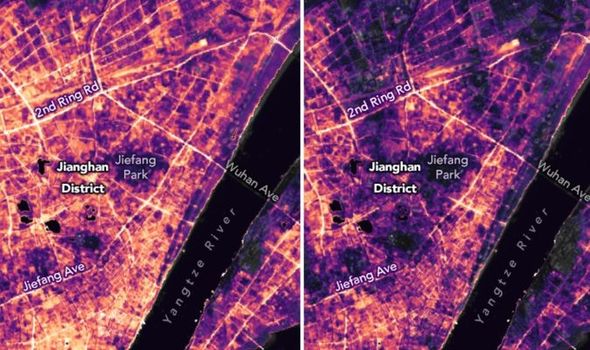 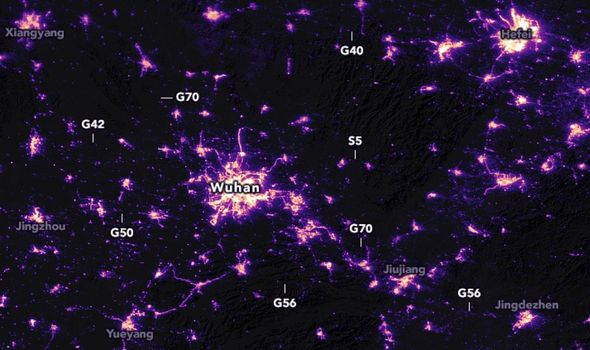 “We have been studying cities around the world and how they grow and change.

“Are they becoming more or less sustainable and livable? How do they consume energy? When, where, and how do people move and why?

“Night lights give context because urbanization is not just about a place; it is a socioeconomic, demographic, and land-use phenomenon.” 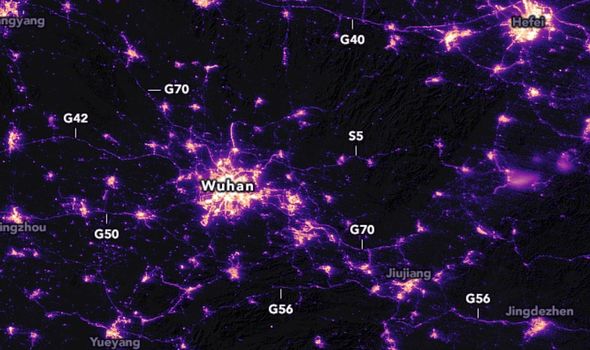 NASA said: “Beyond their beauty, images of Earth at night have a practical use. The nighttime lights of cities, highways, and other infrastructure are fingerprints of how civilization has spread across the planet.

“For some researchers, those lights not only speak to where we live, but how.”

Satellite data from the European Space Agency’s (ESA’s) Copernicus Sentinel-5P satellite, which monitors pollution across the planet, showed a drastic drop in nitrogen dioxide levels across Europe and China, thanks to the lockdown measures, according to scientists from the Royal Netherlands Meteorological Institute (KNMI).

Data from the ESA, which was recorded between March 14 and March 25, shows the drop in pollution is the strongest over Milan, Madrid and Paris.

Henk Eskes, from KNMI, said: “The nitrogen dioxide concentrations vary from day to day due to changes in the weather.

“Conclusions cannot be drawn based on just one day of data alone.

“By combining data for a specific period of time, 10 days in this case, the meteorological variability partly averages out and we begin to see the impact of changes due to human activity.

“The chemistry in our atmosphere is non-linear. Therefore, the percentage drop in concentrations may differ somewhat from the drop in emissions.”