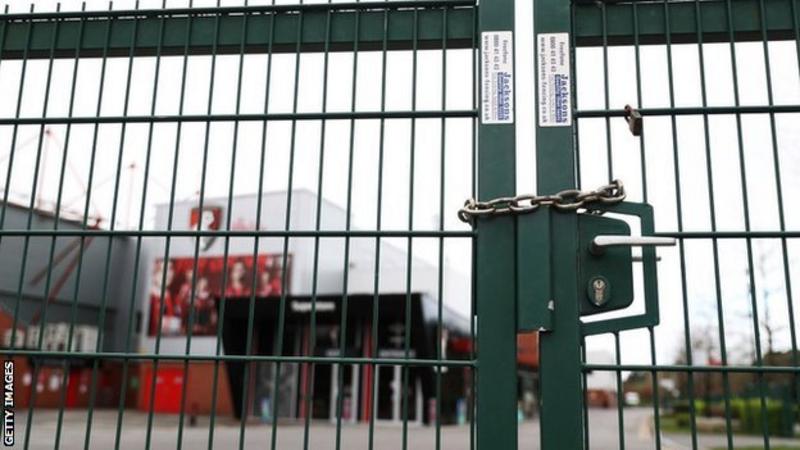 English football is heading towards its third weekend without games and, with no end in sight to the lockdown, the first cracks are beginning to appear in what had previously been a united front.

In the “professional game”, which covers the Premier League and Football League, there is now an acceptance there will be no immediate resumption.

The Premier League clubs are due to meet again on 3 April, when it is almost certain the current postponement of all games until 30 April will be extended again. That will take it past the official end of the EFL league season and towards the last round of Premier League fixtures, which was supposed to be on 17 May.

That would be getting very close to the point where the game has to restart if it is to meet the loose 30 June deadline which European football’s governing body is working towards as the end of the 2019-20 campaign.

Lower down, the FA’s decision to declare the season below National League level null and void, and scrap promotion and relegation at all levels of non-league football from step three down, has caused fury.

Premier League can go it alone

First of all, the good news.

Although Premier League officials are heavily involved in discussions with Uefa, European leagues and clubs about how the game deals with the coronavirus crisis, there is no obligation on them to take the same course as any other league.

So, if Italy or Spain, two of the countries hardest hit at present, abandoned Serie A or La Liga, the Premier League would not have to follow suit.

What the Premier League is reliant on is the goodwill of broadcasters and sponsors. The longer it goes without matches being played, the less practical it becomes to simply pick up where the season left off.

Playing on beyond 30 June is a headache for Liverpool, Newcastle and Watford in particular, given they are changing shirt manufacturers – but clubs who are changing sponsors also have a problem. Deals almost always start in July, with massive marketing campaigns being done around them.

Finishing the season at all costs is a laudable ambition – and may yet come to pass – but it has immense complications. There is unease among some about the speed some club executives have started to talk about the game being played again – one said privately football might help cheer the country up.

But with, literally, hundreds of millions of pounds at risk, the consensus, for now, remains to look for the finishing line.

In that sense, all options are open for discussion. Including playing multiple games on the same day at a neutral ground, if it could be made sterile and an agreement could be reached over the medical staff needed to be in attendance.

No wage deferral agreement in the Championship

The Football League has been told of unease among some Championship clubs about the motives behind a call for blanket wage deferrals in the league.

The idea, which involves capping salaries at £6,000-a-week for four months, was put forward at a hastily arranged conference call between the EFL and the 24 second-tier clubs last Friday.

However, it is understood there was no agreement, with some clubs questioning why they should agree to effectively default on contracts when they had no immediate financial need, given the current coronavirus shutdown has only lasted three match rounds, covering, at the most, two home games.

Championship leaders Leeds have followed Birmingham in confirming wage deferrals have been agreed with their squad.

But the EFL has been made aware, both verbally and in writing, about a number of concerns relating to the wage deferral debate.

In particular, it has been asked when the deferred wages will be paid, whether this will be done in one lump sum – and where the funding will come from for that to be done. In addition, the EFL have been asked what happens in respect of players who are out of contract on 30 June.

Crucially, the EFL is also being asked whether clubs who have deferred wages will still be allowed to sign new players in the summer, thereby adding to a wage bill they have not been able to meet.

Some clubs have been unhappy for a while now about apparent flouting of financial fair play (FFP) rules.

They believe there is now a call being made for a league-wide solution to an issue that is – currently – not affecting every club and questions are being asked about why clubs who are presently able and willing to meet their commitments should, effectively, risk being penalised.

South Shields’ fury – and they are watching what happens next

South Shields have been the most vocal in expressing their disgust at the FA’s decision regarding the non-league pyramid.

Twelve points clear in the Northern Premier League with nine games left to play, their disquiet is easy to understand. Looking at the Twitter feed of the team they would almost certainly have replaced in National League North next season, Bradford Park Avenue, on Thursday, would have irritated them even more.

Bradford – 12 points adrift of safety having played two games more than their rivals – posted a video of Kylian Mbappe rather cheekily celebrating a goal before being jumped on by a delirious Angel di Maria.

But in the small print of a long statement expressing their feelings, they made an interesting point.

It read: “We look ahead with interest to see which way other leagues higher up the pyramid – particularly the Premier League – are concluded should no more football be possible. Will the Premier League also be null and void should this happen?’

Given the swirl of publicity about Liverpool being on the brink of ending their 30-year wait for a league title, has the FA backed itself into a corner of which it cannot – at this stage – be entirely sure of finding a way out?

The only certainty for football at present is the uncertainty

Football’s powerbrokers are continuing to talk but – for now – they can only wait to see whether there is any change in the situation, a chink of light that would allow, almost certainly behind closed doors, the game to slowly click back into gear and the desire to end the season to be met.

The players are also in limbo.

The EFL has instructed clubs not to do any kind of training activity until 14 April at the earliest.

Premier League clubs have either put their players on individual programmes or used video conferencing apps to bring a collective approach to the work they can do. Some have let players return to their home countries, others have not. Clubs with foresight have let players take gym equipment home from the training ground.

To an extent, team meetings can still take place to talk about team shape or tactics. But there is no work being done on the grass, no actual opponent to plan for. As Brighton boss Graham Potter said: “I can do my job. Just not the job I am supposed to be doing.”

Bizarrely though, one country is carrying on as normal.

The new season started as planned in Belarus last weekend. This weekend features a local derby in Minsk, and BATE visiting Slavia-Mozyr.

“Uefa made it clear that it’s up to the Football Associations of the corresponding countries to take the decision and the decision of our FA is to continue,” Belarus Football Federation press officer Aleksandr Aleinik told BBC World Service.

“We had three football players who were suspected with this illness but no positive tests so far. We did consider holding matches behind closed doors but there were cases when fans still came and they gathered round the stadium, so it’s not really thought of as a good measure. You either stop or you continue playing.”