Spare a thought for the parents in QUADrantine! Couple are on coronavirus lockdown with their five children… including three-year-old quads

The lockdown is likely to prove a testing time for parents of young children across the country.

So spare a thought for Carla and Paul Crozier, who have five nippers to keep entertained – including three-year-old quadruplets.

Isla, Demi, Alyse and Milla celebrated their birthday at home in Grays, Essex, on Friday – supervised, no doubt, with a little help from big sister Darcie, six.

But angelic though they might seem cuddling in bed, Mrs Crozier, 37, warned that looks can be deceiving. ‘They fight over anything,’ she said. ‘If one sits too close they’ll whack each other.’ 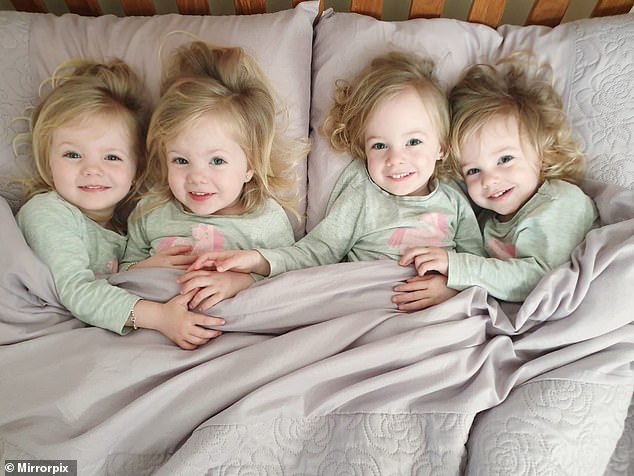 Mrs Crozier has been self-isolating with her girls, who are two pairs of identical twins at odds of 70million to one. She said the birthday was a strange one, but added: ‘I made a cake and we played games. Thank goodness we have a garden. Seeing my babies at three makes me so proud.’

It took the Croziers five years to conceive before Darcie arrived in 2013, after a third and final round of NHS-funded IVF.

The couple spent their savings on self-funded rounds of fertility treatment to complete their family and suffered two miscarriages before the quads were born.

Following the births Mr Crozier, a builder, extended the couple’s home to build a playroom for their five daughters. 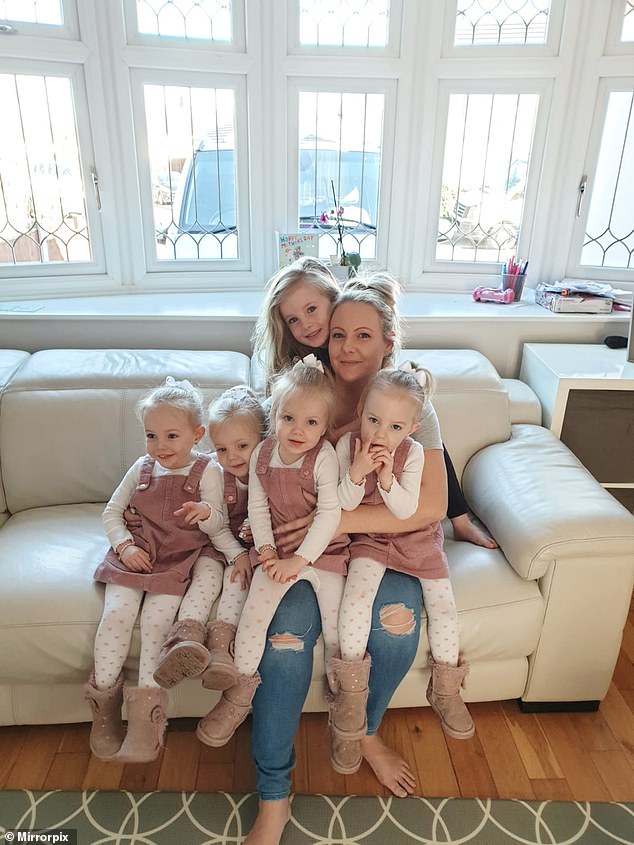 At home with mother Carla and sister Darcie, pictured above. The family played games and baked a cake for the four girls birthdays

She told the Sunday Mirror: ‘It can be lonely and overwhelming, but reaching out can help.’

Mrs Crozier said the family, who hire a minibus for days out, has now passed many milestones, including the girls starting nursery and potty training – saving them £50 on 140 nappies a week.

At times, she said, the couple manage only two hours of sleep a night if one of the girls is poorly or teething. But she added: ‘I get teary – then I remind myself what I’ve got.’