Sale Sharks players have received death threats for not taking a knee as part of the Black Lives Matter movement.

The club’s South African contingent have been caught in the middle of a political crossfire after being criticised by their national sports minister, Nathi Mthethwa.

Springbok stars such as Faf de Klerk and Lood de Jager have joined their team-mates and worn ‘Rugby against Racism’ T-shirts, but have subsequently been targeted on social media. 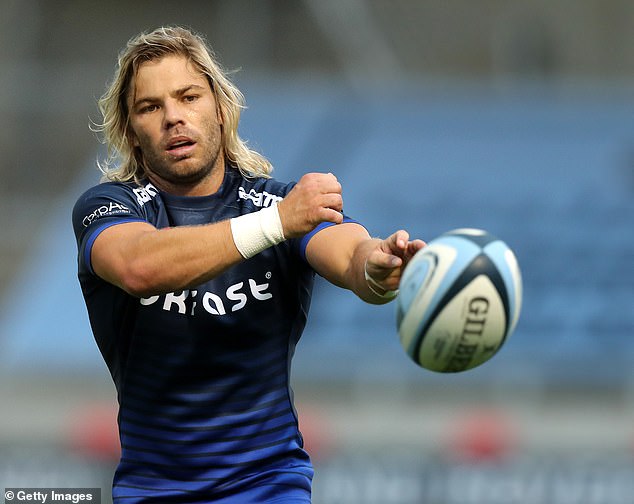 Sale Sharks South African contingent, including Faf de Klerk, have been caught in the middle of a political crossfire following rugby’s support of the Black Lives Matter campaign 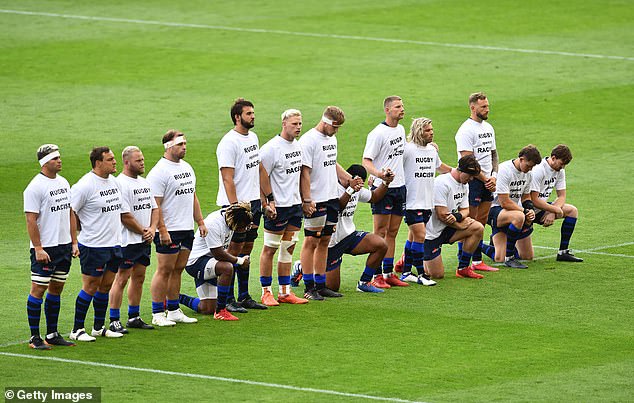 Winger Marland Yarde hit back at their critics on social media, saying: ‘I stand 100 per cent for the Black Lives Matter movement and wholeheartedly believe in the importance of highlighting the continuous battle that we face in society every day, and the need for a change.

‘I have to also stand against death threats against my team-mates which is totally unacceptable.

‘This behaviour will not make the world a better place. We are united we are a team!! #blacklivesmatter #rugbyagainstracism.’

Each Premiership club has been left to arrange their own stance on Black Lives Matter. Bristol Bears have been standing in a heart formation before kick-off and coach Pat Lam said on Monday night: ‘The most important thing is that there is an awareness around racism and we are all aligned — there is no place for racism.’

Bath prop Beno Obano added: ‘I don’t think anyone should receive abuse about this. You may not agree but you can at least understand and empathise if you have a conversation. People perceive things differently.

‘I sit on Twitter sometimes and think, “How do people get so upset with these things?” I find it baffling that people could send that to people they don’t know — haven’t they got work or their own problems? They must have some issues.’