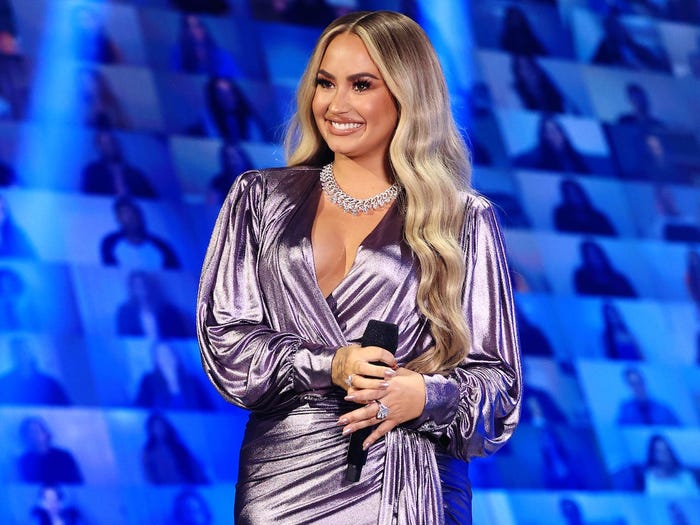 Demi Lovato dazzled on Sunday at the People's Choice Awards, held this year at The Barker Hangar in Santa Monica, California.

As the host of the event, Lovato wore five outfits that were all covered in sparkles. Her first look of the night was one of her brightest, featuring a sequined, orange turtleneck with shoulder pads and balloon sleeves. The blouse was tucked into matching baggy pants that covered her shoes.

The outfit — which she paired with coral makeup, long black hair, and orange jewels — was designed by Naeem Khan.

After walking the black carpet, Lovato hit the People's Choice stage with blonde hair, pink sandals, and a blush-colored gown. The dress had long sleeves, a V-shaped neckline, and a high slit in the middle of its skirt, as well as sparkling stripes and matching stars.

The look — as well as Lovato's other four outfits — was styled by Siena Montesano.

She later changed into a minidress with multicolored stripes, a high neckline, long sleeves, and a skirt that fanned outwards at her hips.

Lovato completed the look with silver pointed pumps with see-through accents from Gianvito Rossi. The shoes retail for $815 at the time of writing.

Lovato's fourth outfit of the night was arguably her most glamorous. She wore a metallic-purple wrap dress with balloon sleeves and an asymmetrical skirt that was designed by Alexandre Vauthier. Her $895 silver sandals, on the other hand, were created by Gianvito Rossi.

To add another layer of sparkles, Lovato also wore a diamond necklace from Peter Marco.

Finally, Lovato closed out the show in a black gown with a plunging neckline and elbow-length sleeves. Her skirt, which had a short slit in the middle, extended into a small train behind her.

Though the dress was embellished from top to bottom with black sequins, Lovato made the outfit stand out even more with dangling earrings, a diamond necklace, a showstopping ring, and black platform heels with a jewel attached.

Representatives for Siena Montesano did not immediately respond to Insider's request for comment.