Architect designs a dissolving ‘skyscraper’ aimed at reviving wildfire-damaged forests by distributing soil, nutrients and seeds as it disintegrates

As the western United States and Australia continue to recover from last year’s devastating wildfires, an Italian architect has come up with a design for a dissolving ‘skyscraper’ that would naturally disperse vital nutrients and seeds to ravaged forests.

‘Regenera,’ the brainchild of Alberto Roncelli, isn’t a true skyscraper—that’s just a reference to structure’s ‘exaggerated dimensions,’ Roncelli said in a Q&A with KooZA/rch, a blog associated with the Architectural Association School of Architecture in London.

As more of the structure blows away, it shrinks to the size of a room, then eventually dissolves completely.

Composed of soil, seeds and nutrients, the biodegradable lattice would be placed in the center of a burnt ecosystem, Design Boom reported.

During Regenera’s initial phases, scientists in a laboratory on the ground level would monitor the ecosystem and its rejuvenation.

Eventually, the researchers would abandon the crumbling structure and allow it to provide shelter for birds and small animals as it disintegrated through wind action and the passage of time. 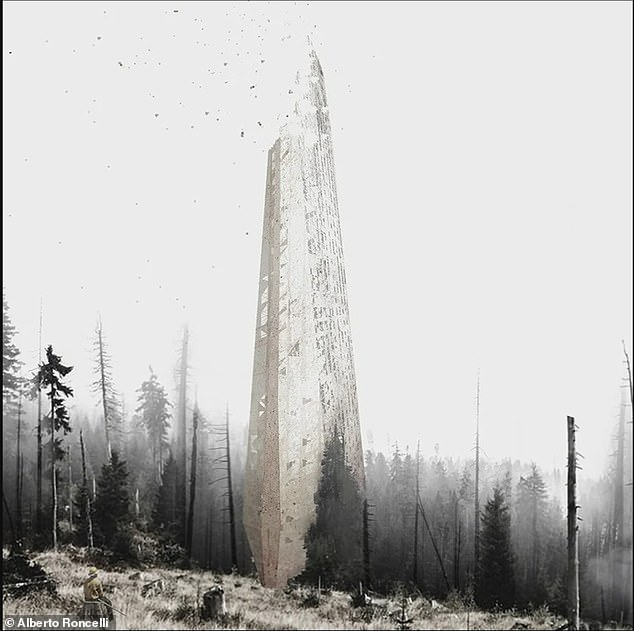 Architect Alberto Roncelli’s concept for Regenera is a tower made of seeds, soil, nutrients and other biomatter that would ‘feed’ a fire-damaged forest as it disintegrated

‘If we imagine a world in which technology allows us to build buildings made of nutrients and that are fully compostable, what role should they play?’ Roncelli said in the Q&A.

‘Should we begin to understand architecture as a living organism, in the sense that at its death it is capable of decomposing and serving its natural ecosystem?’

For his design to be truly effective, Roncelli says he would need to collaborate with chemists, biologists, meteorologists and farmers to determine ‘the quantity and variety of nutrients, erosion time and wind reaction’ for each tower.

Claiming to be able to ‘cure’ an ecosystem damaged by human action is itself a major act of human intervention, Roncelli admits, but hopefully one with ‘new sensitivity and a new meaning.’ 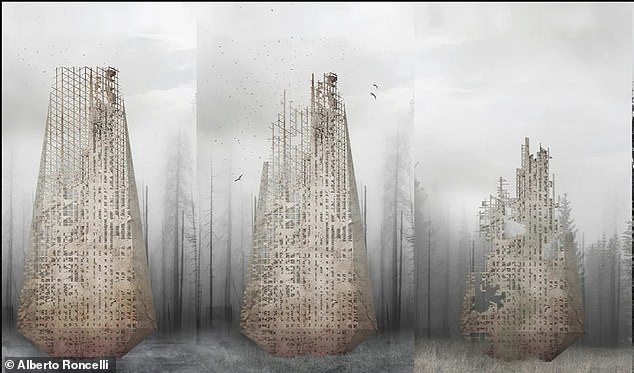 In the earliest phase, Regenera would house a lab in its base where scientists could monitor the damaged ecosystem. As it dissolved, the researchers would abandon the structure and allow birds and small mammals to use it as shelter until it completely blew away

He describes Regenera as a ‘manifesto for a new possible way of relating architecture and nature, structure and ecosystem, time and erosion, skyscrapers and forests.’

More than 100 fires were reported in the Western US by that point in 2020, burning nearly 4.7 million acres, the highest year-to-date area since 2018, according to the National Interagency Fire Center.

More extreme fire behavior in recent years has been driven by drought and warming temperatures due to climate change, experts report.

Among the most concerning developments are that fast-moving wildfires leave less time for warnings or evacuation. 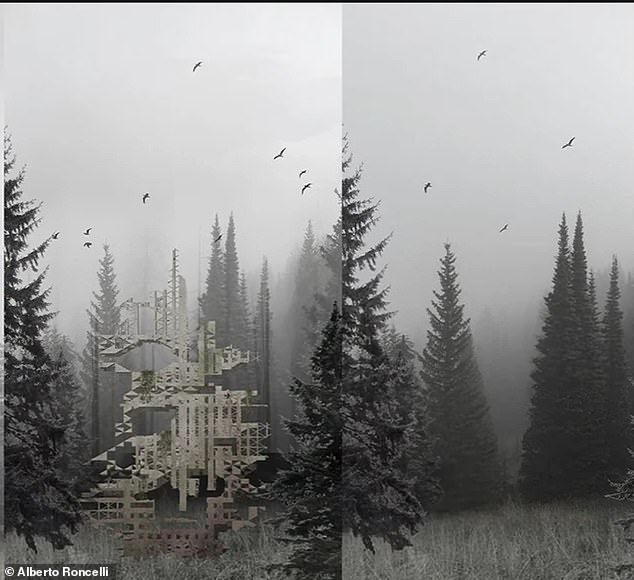 The composition and size of each tower would have to be determined in collaboration with chemists, biologists, meteorologists and farmers, Roncelli said

And in Australia, the 2019-2020 bushfire season was referred to as ‘Black Summer,’ due to its severity.

The fires peaked in December 2019 and January 2020—by March, some 46 million acres had been engulfed across New South Wales, Victoria and the Australian Capital Territory, killing at least 36 people and hundreds of millions of reptiles, marsupials and other animals.

‘Natural fires can have beneficial effects on native vegetation, on animals and on ecosystems that have evolved with wildfires,’ Roncelli wrote in his proposal.

‘The problem has arisen in recent decades, where we are facing increasing intensity in large fires caused by humans,’ he added. ‘In the case of large and heavy forest fires, it is common to have a totally destroyed ecosystem and, in some cases, the inability to regrow.’