Los Angeles Dodgers third baseman Justin Turner was removed from World Series Game 6 during the eighth inning of L.A.’s title-clinching victory. After the game, it was announced on the Fox broadcast that Turner had tested positive for COVID-19. It was Major League Baseball’s first positive test of the playoffs, and Turner was immediately removed from the game once the positive test result was known.

Turner had a test from Monday come back inconclusive in the second inning, reports Jeff Passan of ESPN. Once the lab completed running the test from Tuesday, MLB was informed Turner tested positive and immediately informed the Dodgers that he had to come out of the game.

MLB commissioner Rob Manfred was asked about Turner’s positive test after he presented Corey Seager with the World Series MVP trophy. Bill Shaikin of the Los Angeles Times tweeted that Manfred said, “We learned during the game. He was immediately isolated to prevent spread.”

Turner tweeted after the game that he was asymptomatic and felt “great”:

Thanks to everyone reaching out! I feel great, no symptoms at all. Just experienced every emotion you can possibly imagine. Can’t believe I couldn’t be out there to celebrate with my guys! So proud of this team & unbelievably happy for the City of LA#WorldSeriesChamps

Shortly after the tweet, a masked Turner returned to the field and was carrying around the trophy while celebrating with teammates. He was next to manager Dave Roberts in front for the team picture with the trophy and he even took off his mask at one point. 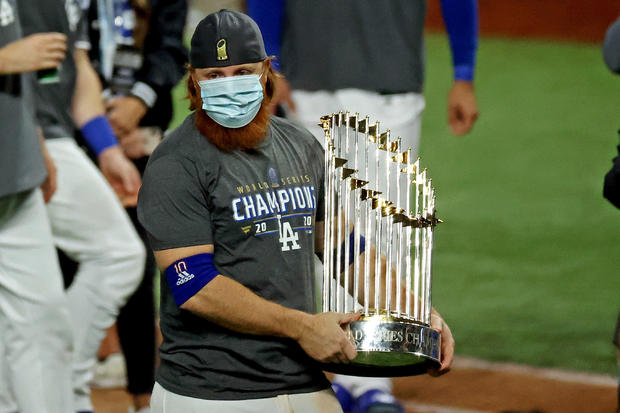 During the 60-game regular season, MLB had to postpone 43 games due to positive COVID tests. Two teams — the Florida Marlins and St. Louis Cardinals — had significant outbreaks in July and August that threatened their seasons. However, the league was able to complete the 60-game season and used neutral sites in the postseason to limit travel and exposure.

With the Turner news, it appears MLB dodged a serious bullet with the Dodgers closing things down and avoiding a Game 7.

In theory, the two teams could have just played Game 7 on Wednesday as scheduled but at the very least — in sticking consistently with how they did things in the regular season — the Dodgers would’ve been forced to play without one of their best players in Turner.

Then there would’ve been the issue on how often Turner was within six feet of teammates and opponents throughout the day. MLB and Rob Manfred would’ve absolutely had their hands full in answering questions on the matter of any contact tracing.

Turner’s test was a jarring way to end what was possibly the weirdest season in baseball history.