The European Union will not block shipments of COVID-19 vaccines to Australia, the EU’s ambassador to Australia has confirmed, with first batches expected by the end of February.

As Australia waits for vaccines to arrive, Chief Medical Officer Professor Paul Kelly revealed the Australian Health Protection Principal Committee has been tasked with combing through the country’s hotel quarantine systems to look for cracks after a third case of the highly contagious UK strain was confirmed in a person linked to Victoria’s hotel quarantine program. 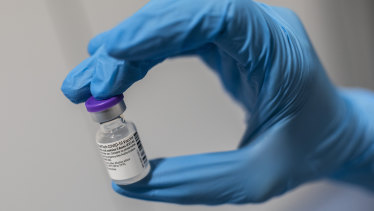 The European Union says it will ensure a smooth process for the delivery of Pfizer vaccines to Australia.Credit:AP

On Tuesday, Victoria recorded a further case in a hotel quarantine worker and another in a woman two days after she left quarantine. NSW recorded two cases in returned travellers. The strains of these cases are still unknown.

Australia’s vaccine rollout is due to begin at the end of the month with the first delivery of at least 80,000 Pfizer vaccines. The first lot of international AstraZeneca vaccines is due in early March, and the companies both confirmed those timelines on Monday.

On Tuesday, European Union Ambassador to Australia Dr Michael Pulch said the bloc would “ensure there will be a smooth authorisation process” for those shipments.

“I am very pleased to announce that the first shipment of vaccines will arrive here in Australia on time,” he told Sky News.

“The first vaccinations that will be used here in Australia will come from the European Union.”

The exact arrival date was a matter for the Australian government and the companies, Dr Pulch said.

The reassurance follows transparency controls being placed on vaccine exports by the EU after it received short notice from both Pfizer and AstraZeneca that they would not be able to deliver vaccines to EU countries. Dr Pulch denied the union was hoarding supplies.

“We want to have transparency about shipments from the EU to other countries and we will authorise them,” he said.

Professor Kelly on Tuesday said the AHPPC and National Cabinet would be looking at ways hotel quarantine can be buttressed to prevent more COVID-19 leaks into the community.

Professor Kelly pointed to recent changes to the system, including pre-flight testing and mandating masks on flights and in airports, and said he’s asked NSW to provide more detail about its recent introduction of a post-quarantine 16th-day test.

“We need to be prepared for those strains, which are definitely more able to be transmitted between people,” Professor Kelly said.

Despite the heightened transmissibility of those strains, he said it was important to note there was no evidence the new strains affect the AstraZeneca vaccine’s ability to prevent severe disease.