The virtual awards season is finally coming to a conclusion on Sunday with the 2021 Oscars.

While most other awards shows this season have been primarily virtual due to the pandemic, the 93rd Academy Awards are planning for an in-person ceremony that’s meant to “look like a movie” instead of an awards show, according to Oscars producers.

While details on the 2021 Oscars are still sparse, the ceremony is expected to be full of excitement given its new format and also because this year’s nominations pool is one of its most inclusive in years. For instance, for the first time in Oscars history, two women received nominations for best director: Chloé Zhao for “Nomadland” and Emerald Fennell for “Promising Young Woman.”

The best picture nominees also touch on a diverse set of topics, such as “Judas and the Black Messiah” centering on Chairman Fred Hampton and the Black Panther Party, “Minari,” the story of a Korean family immigrating to the U.S. and “Sound of Metal,” a story centered on a drummer’s hearing loss.

From what to expect from the Oscars’ “movie” format to how to tune in, here is everything you need to know about the 2021 Oscars. Read on for more.

The 93rd annual Academy Awards will be held on Sunday, April 25 at 8 p.m. EST. The show will be broadcast on ABC. The awards show, like most others during awards season, was postponed because of the coronavirus pandemic. The show was initially scheduled for Feb. 28.

All of the Fashion at the 2021 BAFTA Awards

The 2021 Oscars will be held at multiple locations in Los Angeles, including the Dolby Theatre — where the ceremony is usually held — and the city’s historic Union Station. For nominees that aren’t in Los Angeles, Oscars producers are offering “satellite hook-ups” instead of Zoom so that the virtual nature will integrate seamlessly into the overall show. There will be ceremony outposts in London and Paris for nominees in those cities.

“We can control that image, we can control the sound, we can make it feel more integrated into the overall feeling of the show,” said director Steven Soderbergh, one of this year’s Oscars producers, to Variety. “We’ve created another series of technological hurdles for ourselves to make all of these remote satellites and not Zooms.”

Producers of this year’s Oscars are committed to putting on an in-person ceremony in Los Angeles. They have tapped veteran awards show director Glenn Weiss to direct the ceremony.

“Our plan is that this year’s Oscars will look like a movie, not a television show, and Glenn has embraced this approach and come up with ideas of his own on how to achieve this,” reads a statement from the Oscars producers. “We’re thrilled to have him as part of the brain trust.”

It is expected that most nominees and presenters will appear in-person at the Los Angeles locations, and others in Europe will appear via satellite.

Who is nominated for the 2021 Oscars? 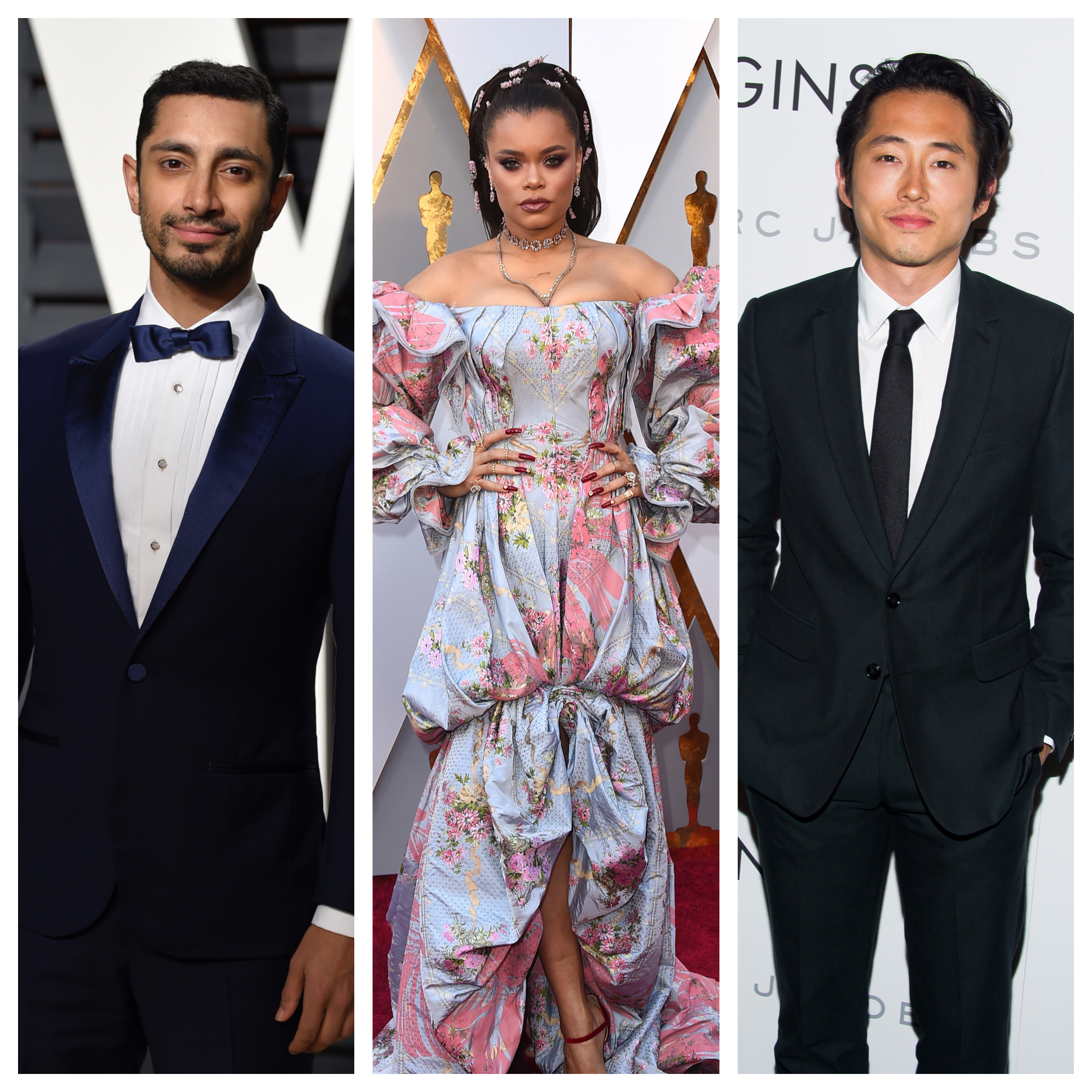 Riz Ahmed, Andra Day and Steven Yeun are nominated at this year’s Oscars.

This year’s Oscars nominees list is one of its most diverse to date. Notable nominations include best actor nominees Steven Yeun for “Minari” and Riz Ahmed for “Sound of Metal,” who are the first Asian American actor and Muslim actor, respectively, to be nominated in the category.

The best picture nominees include “The Father,” “Judas and the Black Messiah,” “Mank,” “Minari,” “Nomadland,” “Promising Young Woman,” “Sound of Metal” and “The Trial of the Chicago 7.”

Who will be hosting the ceremony?

For the third year in a row, the Oscars will have no host.

Who is presenting at the 2021 Oscars?

Is there a red carpet pre-show?

There will be an Oscars pre-show, called “Oscars: Into the Spotlight,” starting at 6:30 p.m. EST on ABC prior to the Oscars.

The 2021 Oscars will be broadcast live on ABC and will be livestreamed on the network’s website. The awards show can also be streamed through providers like Hulu, AT&T TV Now, YouTube TV, Fubo TV, Sling TV and Locast.

How 11 Golden Globes Outfits Looked Like on the Runway

WATCH: What It’s Like to Walk the Red Carpet at an Awards Show