European football’s governing body charged the FA with four offences relating to supporters’ behaviour – and will also conduct a separate investigation into the major security breaches before the match on Sunday.

The showpiece match which England lost on penalties to Italy after a 1-1 draw was marred by a series of shocking incidents, including thousands of ticketless fans getting into the ground and attacking others on the concourse.

The charges come three days after the FA was fined £25,630 for crowd problems, including the shining of a laser pointer at a player, during England’s semi-final win over Denmark, at the same ground in North West London.

Danish goalkeeper Kasper Schmeichel had a laser directed at his face as he prepared to face a penalty in that game last Wednesday. The other offences were the booing of the national anthem and the setting off of fireworks. 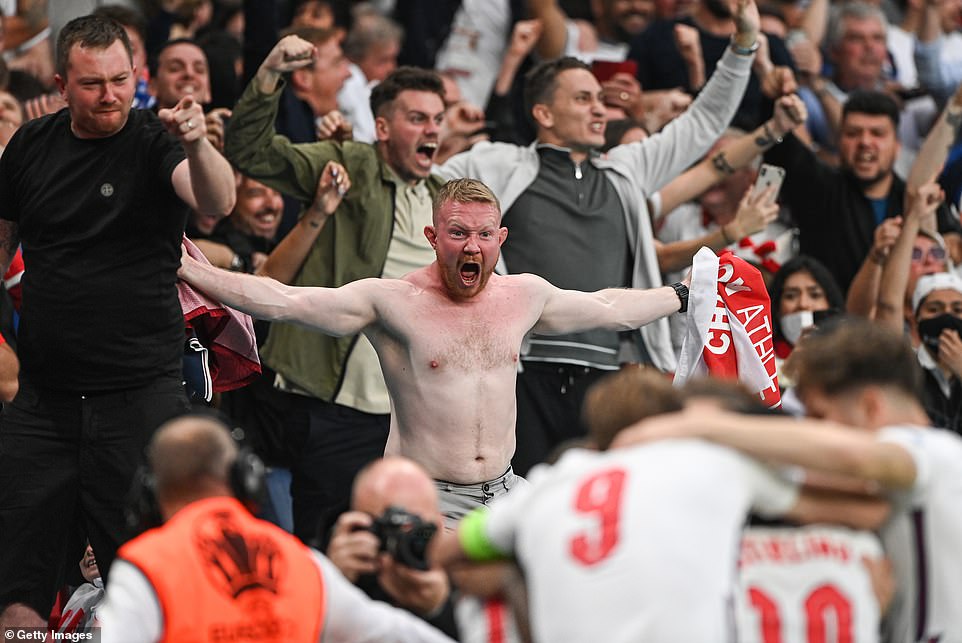 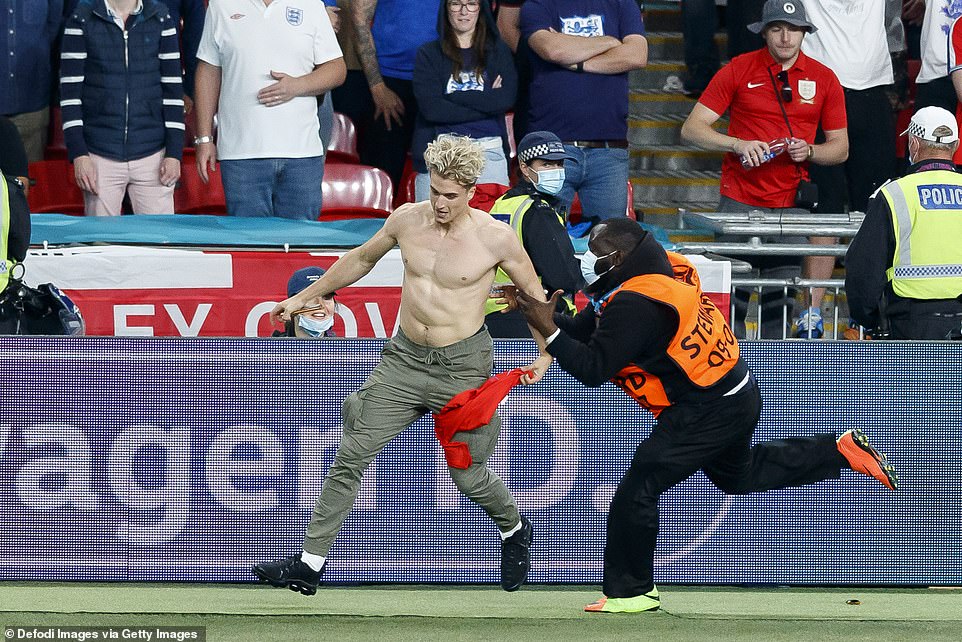 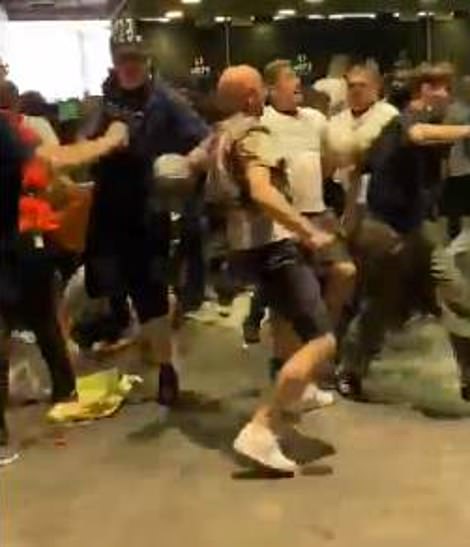 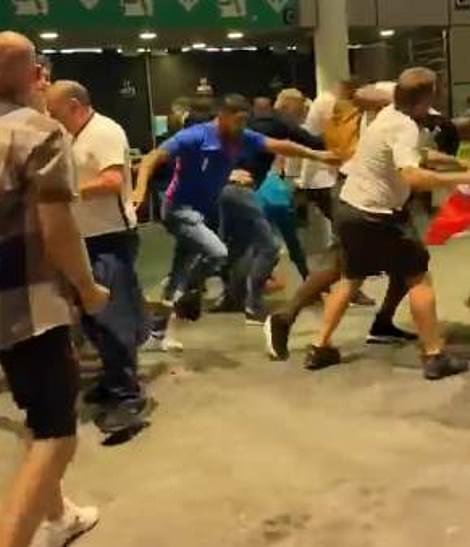 It is claimed that 5,000 ticketless yobs stormed into Wembley for Sunday’s final against Italy 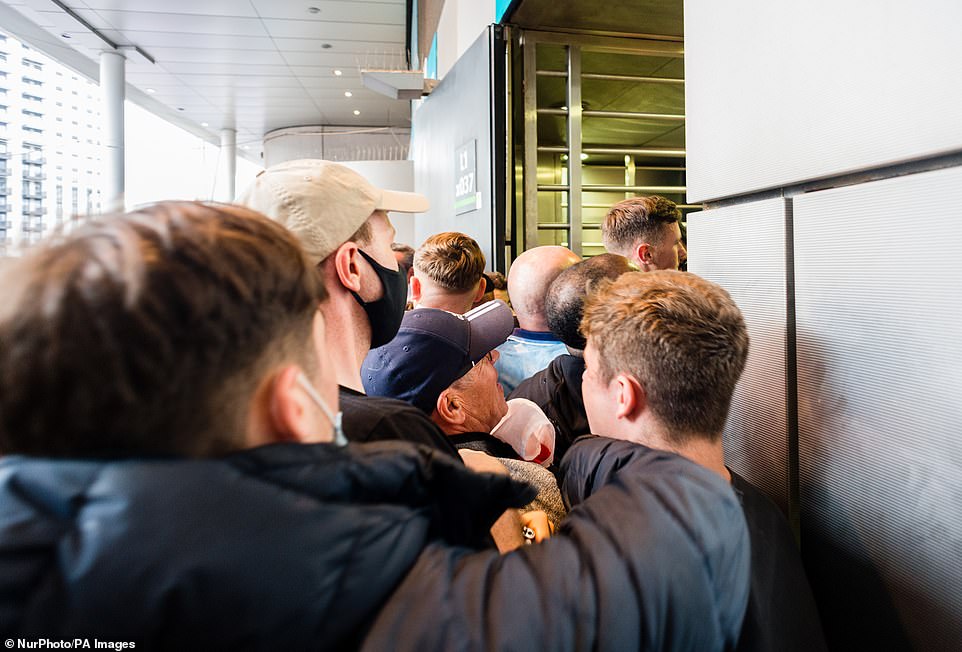 Shoving in: A mass of England supporters throng outside stadium and push at the barriers

Today, a UEFA statement said: ‘In accordance with Article 31(4) DR, a UEFA ethics and disciplinary inspector has been appointed to conduct a disciplinary investigation into events involving supporters which occurred inside and around the stadium.’

An estimated 5,000 ticketless hooligans gained entry to the stadium for Sunday’s match before it kicked off at 8pm, forcing their way through broken gates and terraces which led to ugly scenes on the concourses.

What are the four Uefa charges against the FA?

The English Football Association has been charged by Uefa over the conduct of England supporters at the Euro 2020 final. The charges relate to invasion of the pitch, throwing of objects, disturbance during the national anthem and lighting of a firework. They are:

The UEFA statement comes after it was claimed that the capacity – meant to be set at 60,000 – was actually 5,000 over that figure on Sunday. However, that number could easily increase once a full investigation is completed.

People were still able to gain access to the stadium through broken gates and turnstiles whilst the game was still being played in extra-time too, it is also being claimed.

More violent scenes in London’s Leicester Square as well as Wembley before and after the penalty shoot-out defeat will also have damaged the nation’s chances of hosting the 2030 World Cup.

Police made 86 arrests on Sunday, including 53 at Wembley, for a number of offences including public order offences, ABH, drunk and disorderly and criminal damage. A total of 19 officers received injuries.

Yesterday, the FA said it would conduct a full review into how people without tickets were able to breach security and gain access to Wembley for the final.

A stadium spokesman said during the match on Sunday that a ‘small number’ of people had got into the stadium and that security staff and stewards were working to remove them.

However, there have been reports of some ticketless people being inside the stadium for the whole match, and of genuine ticket-holders being afraid to confront people occupying their seats. 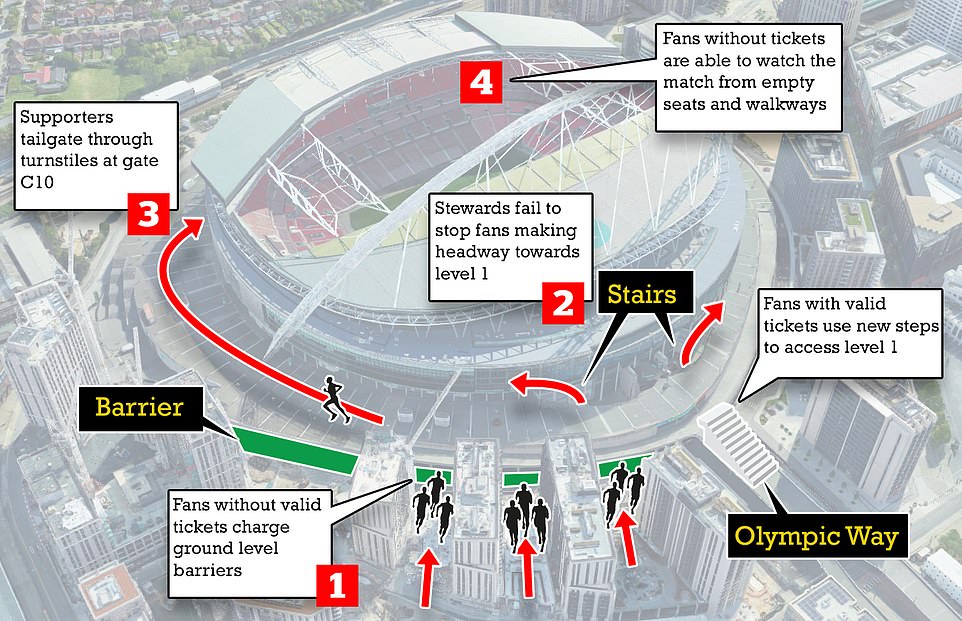 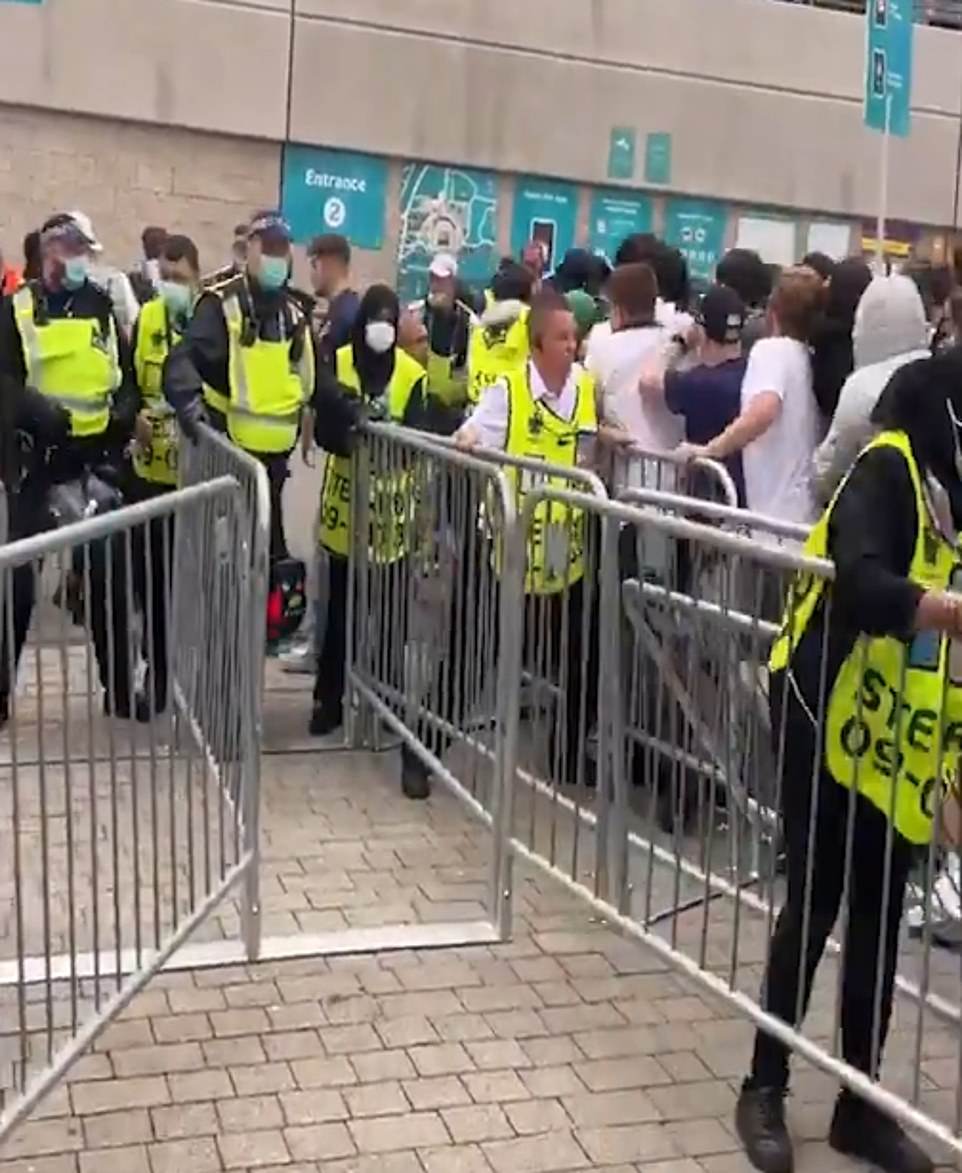 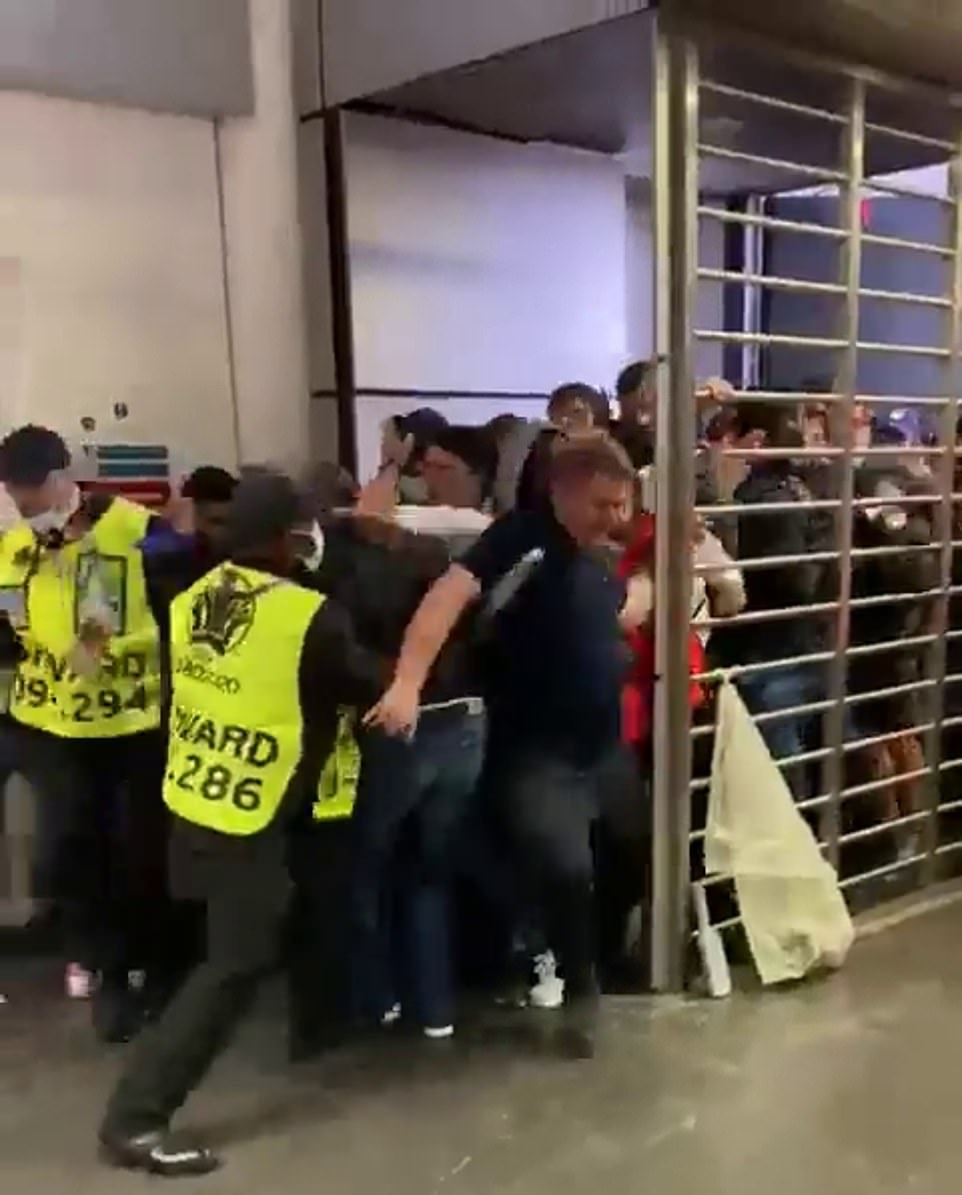 Breakthrough: With no police in sight, stewards try in vain to force them back but scores barge their way in 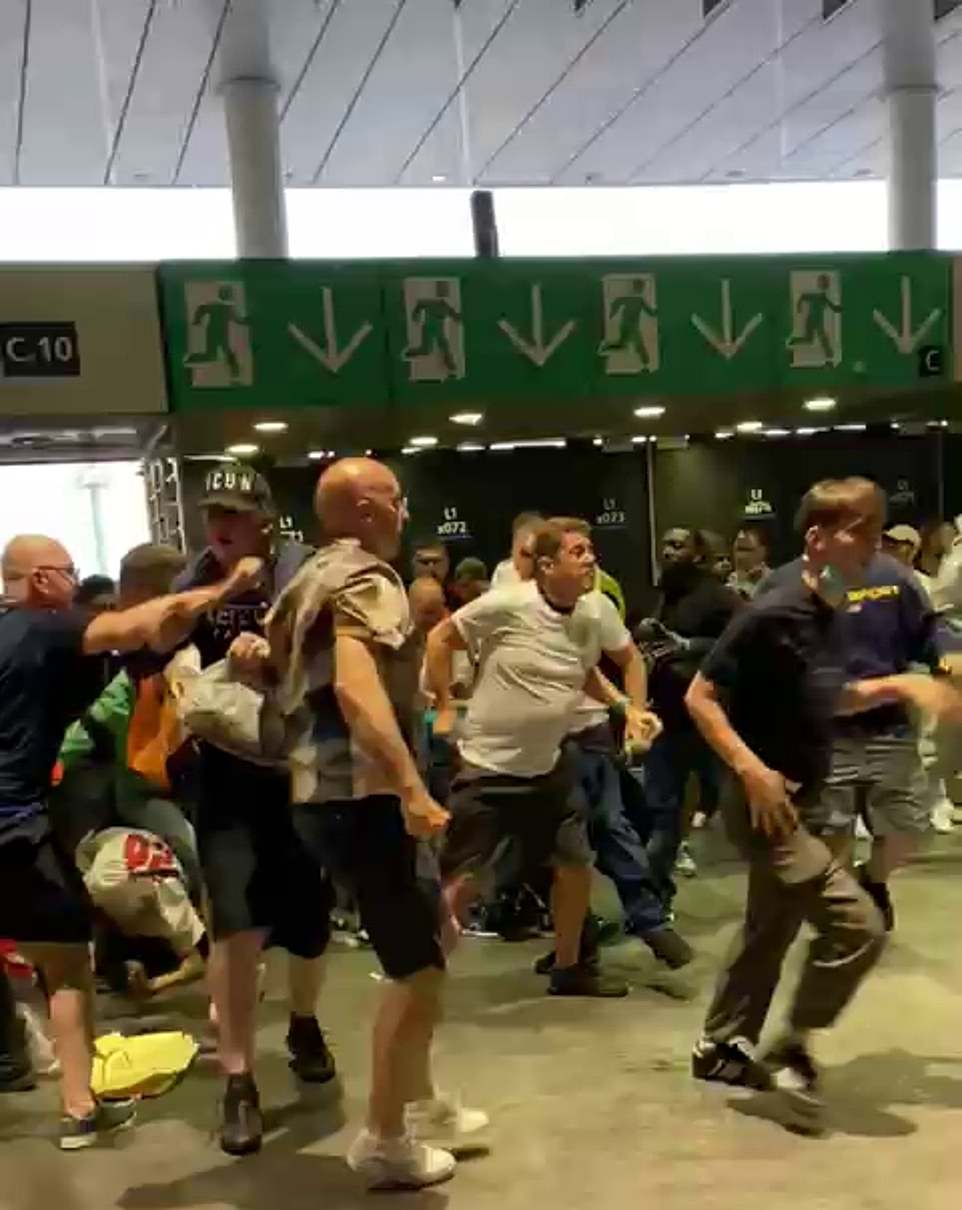 Stampede of the mob: Barriers are breached allowing some fans without tickets to race into Wembley 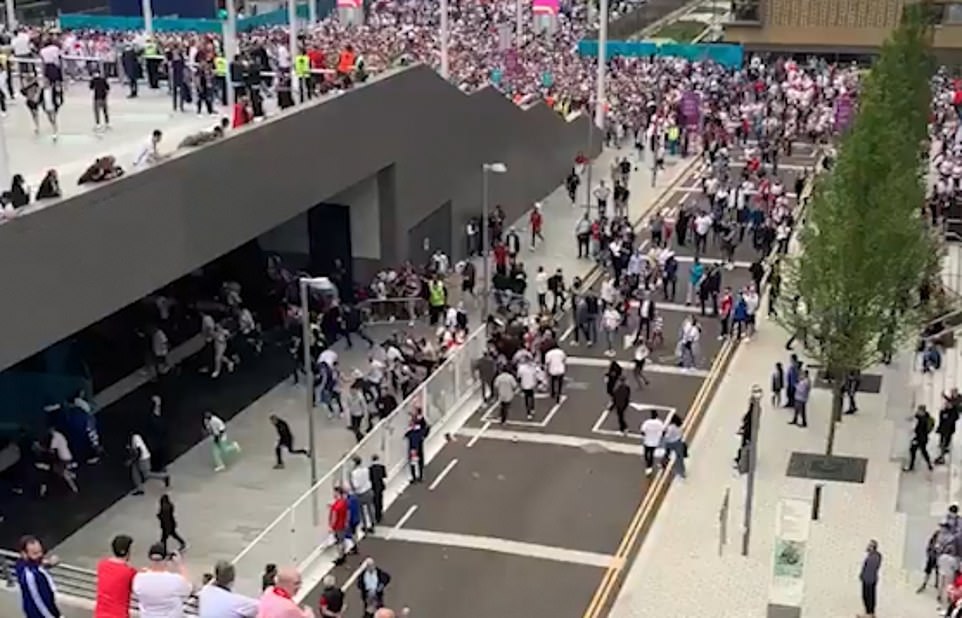 The security operation around the match has been widely criticised, and FA chief executive Mark Bullingham told BBC Radio Four’s Today programme yesterday: ‘We will do a full review and we will work with the police to catch anyone involved and make sure we can prevent it ever happening again.

‘Anyone caught will obviously be banned and have the right action taken against them.’

The FA said the review would be conducted alongside the police, the Greater London Authority, the Safety Advisory Group and tournament stakeholders.

The governing body defended the level of stewarding and security in place for the match, saying it ‘exceeded the requirements for the match’ and was ‘greater than any other previous event at Wembley Stadium’.

A spokesman added: ‘The behaviour of the people who illegally forced their way into the stadium was unacceptable, dangerous and showed total disregard for the safety and security protocols in place.

‘No steward or security staff should be subjected to this type of behaviour and we thank them for their support on the night.’

Mr Bullingham said some ‘drunken yobs’ had tried to force their way in, and added: ‘We run a stadium, not a fortress. We have got a fantastic security team at the stadium and they had never seen anything like it.’ 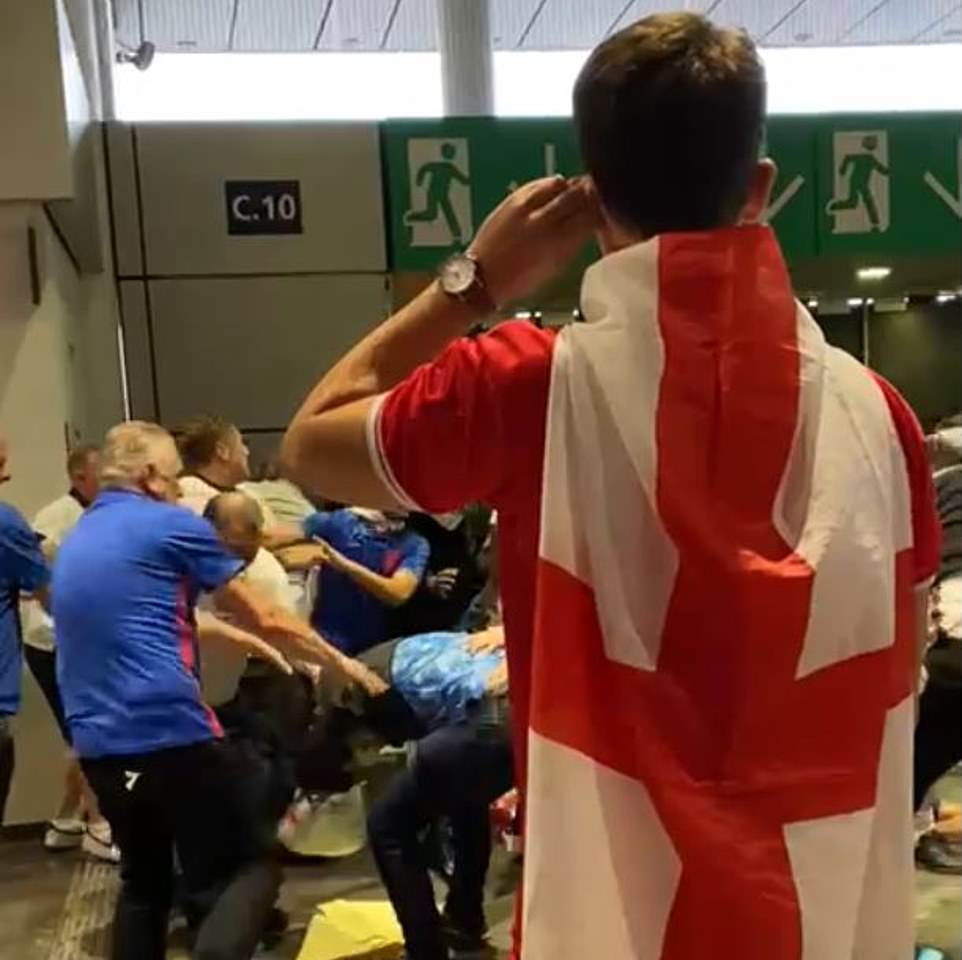 Watching aghast: A fan draped in England flag looks on as supporters with tickets brawl with the invaders 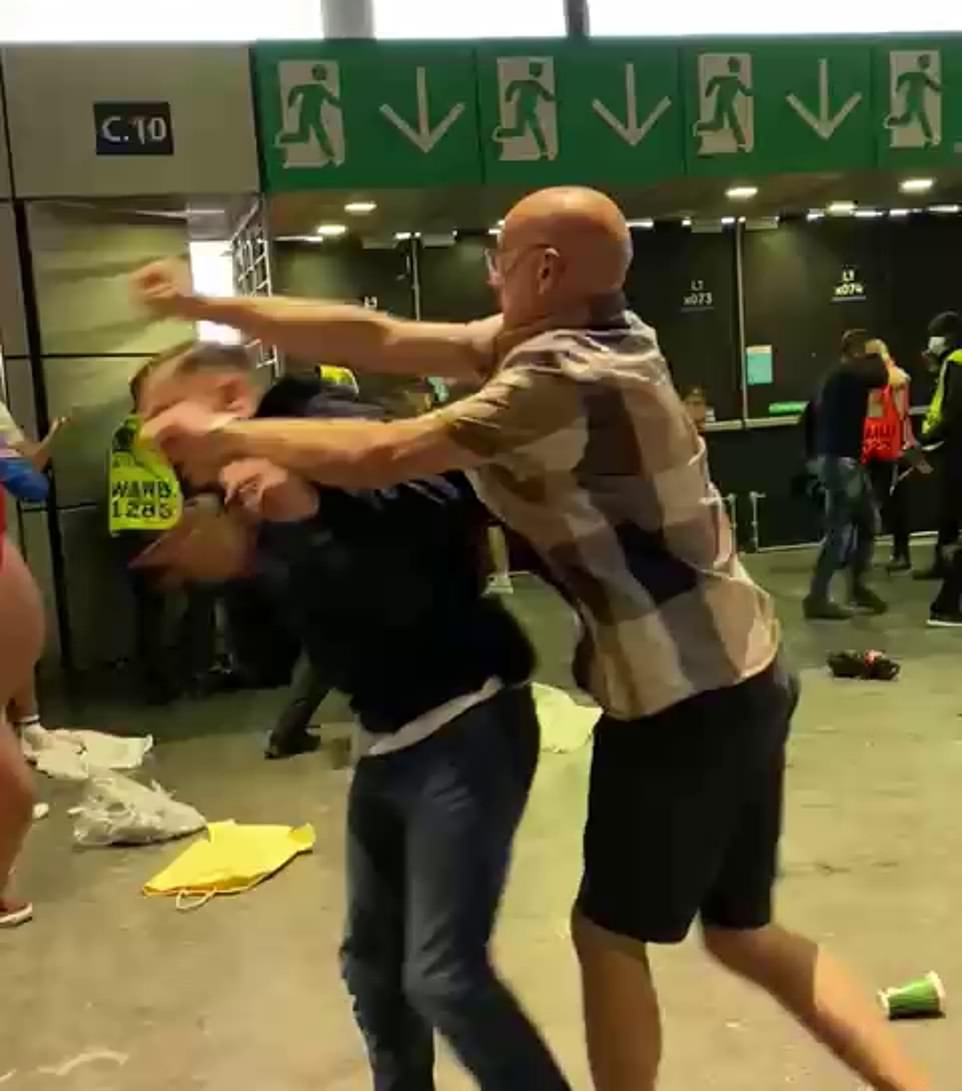 Fists fly: Ticketless fans got into altercations with others as they barged into the stadium

He apologised to any supporter whose experience had been affected as a result of the security breach.

Videos were posted on social media of people being attacked within the stadium concourses, while away from the stadium there was also disorder in other areas of London.

The Metropolitan Police said there had been 53 arrests connected to the match for a variety of offences. The force also reported 19 officers had been injured as they confronted ‘volatile’ crowds.

Deputy Assistant Commissioner Laurence Taylor said: ‘We spent a lot of time encouraging and asking people not to turn up if they hadn’t got a ticket prior to the event, and clearly a lot of people chose to ignore us.

‘I don’t think anybody was expecting large numbers of people to try and incur into the stadium.

‘As soon as it became clear that was happening, stewards reacted very quickly and police were deployed to the stadium to prevent the situation from becoming worse.’

Mr Taylor revealed a ‘considerable number’ of fans got into Wembley, although he was not able to estimate how many. 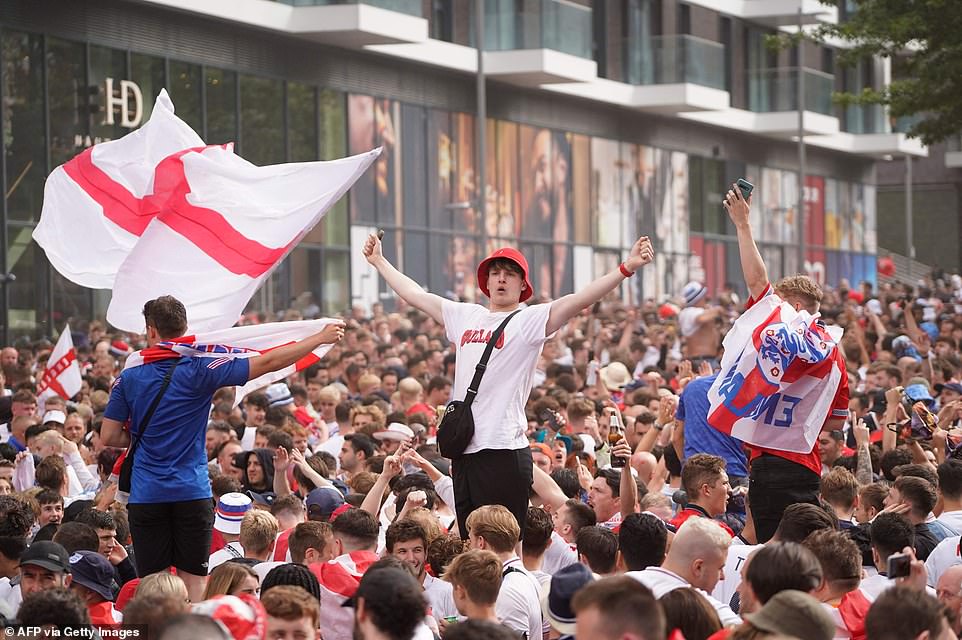 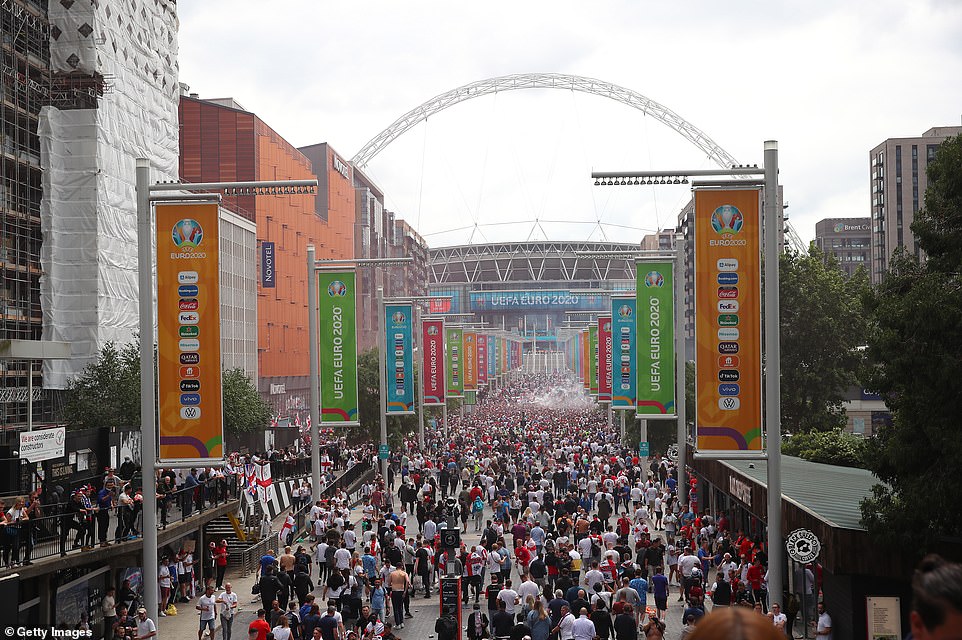 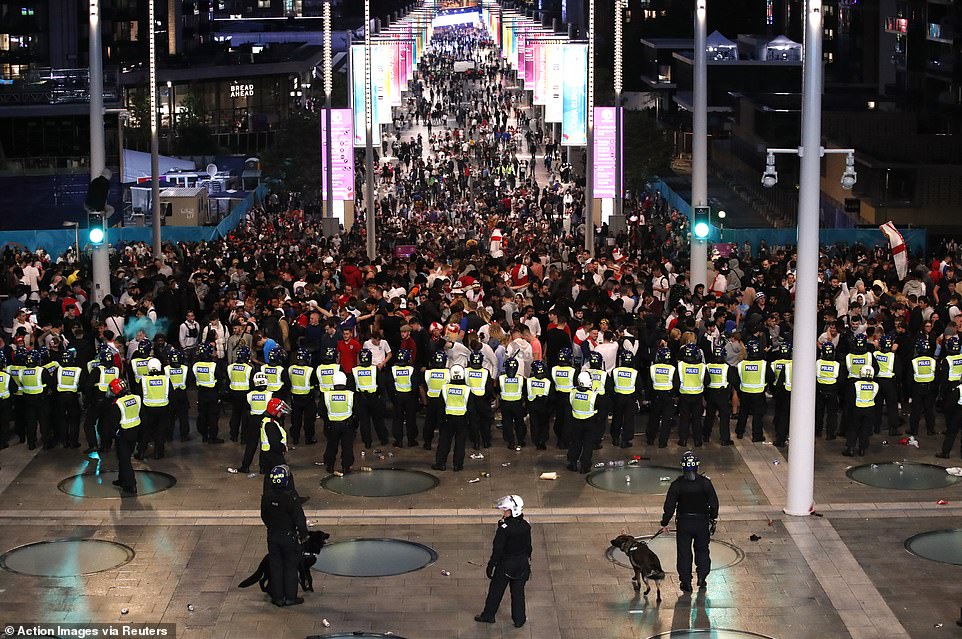 He said: ‘As part of our post-event investigation, we will be looking into all criminality and we will be looking to bring offenders of any crime to justice – that may include football banning orders as well as criminal justice prosecutions.’

Formula One team McLaren revealed yesterday evening that its driver Lando Norris had the watch he was wearing stolen at Wembley after the match and was left ‘unharmed’ but ‘understandably shaken’ by the incident.

Police forces across the country dealt with more than double the number of football-related incidents following the Euro 2020 final compared to any previous tournament matches.

Figures released yesterday, which are likely to change in the coming days, revealed there were 875 incidents overall on the day of England’s match with Italy, with 496 at licensed premises and 246 football-related arrests.

Chief Constable Mark Roberts, National Police Chiefs’ Council Football Policing Lead, said: ‘Although the result wasn’t what we hoped for last night, it’s absolutely no excuse for the appalling behaviour we have seen across the country.

‘I’m extremely disappointed to note the significant increase in incidents compared to England fixtures at previous tournaments. After the year the country has had, I can understand people are eager to make the most of restrictions easing.

‘However, there is no excuse for the violent and frightening behaviour of a sizeable minority who chose to drink to excess, or take drugs, and get involved in criminal acts.

‘Police forces up and down the country were well prepared for any increase in demand and incidents were dealt with robustly, but the scale of the issues clearly presented challenges.’

Former England rugby international Ugo Monye, who attended the game, told BBC Radio 5 Live: ‘I was in the queue just trying to get in. You’re so excited, 55 years, you feel fortunate, 65,000 people there, population of 65 million. It’s a privilege, it should have been a celebration.

‘But the top and tail last night was just utterly disgraceful. I was stood in the queue and next to me was a father with his two daughters and we were chatting and they couldn’t be more excited.

‘But all of that excitement turned. They were frightened. The two girls were cowering, the dad was trying to do everything to protect them as we saw hooligans, thugs, tearing down barriers and just storming Wembley.

‘Chucking bottles at police horses, trying to get past, whatever they could, with no care or appreciation for anyone else.’

The scenes of disorder can have done little to aid any UK and Ireland bid for the 2030 World Cup, with a decision on whether to bid for the centenary tournament due to be taken in the first half of 2022.

Safety and security issues formed part of the 2026 World Cup bid evaluation process. Monye added: ‘It’s a privilege to host (the Euros). Six out of seven games at Wembley. Why should we be allowed to host?

‘Leaving the stadium with garbage, litter and destruction surrounding Wembley, which flowed into London. Why should we? I’m sad saying that.’ keegan