Mixed fortunes! While one ’90s Lotto millionaire still works at M&S, Femail reveals how her fellow winners include an Elvis act who turned to alcohol and William Hague’s aunt who bid £12,000 to appear on a Terry Wogan quiz show

After a lottery winner who picked up a £2.7 million jackpot 25 years ago revealed she is still stacking shelves at a supermarket, FEMAIL has taken a look back at how previous winners decided to spend their fortune.

Elaine Thompson, 64, from Killingworth, north Tyneside, who became a millionaire in December 1995 after winning the lottery. told how she still works at Marks & Spencer because she wants to be a good role model for her children.

However, not all winners have stuck to their day jobs, with some finding their lives spiralled in ways they could never have imagined – proving that wealth doesn’t always equal happiness.

Elvis impersonator Gary Ashmore, from Reading, who won £1.6m aged 26 in 1997, found himself battling with booze after moving to Gran Canaria, while Penny Haigh, from Doncaster, who won £1.3m in 1996, and owned an engineering company with her husband John, opted for early retirement and gave the business to her three sons. 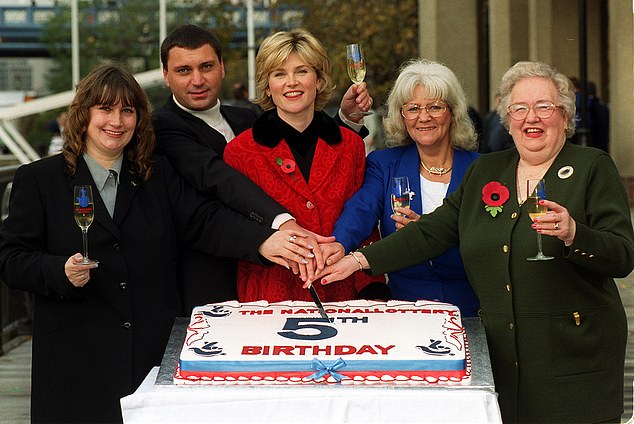 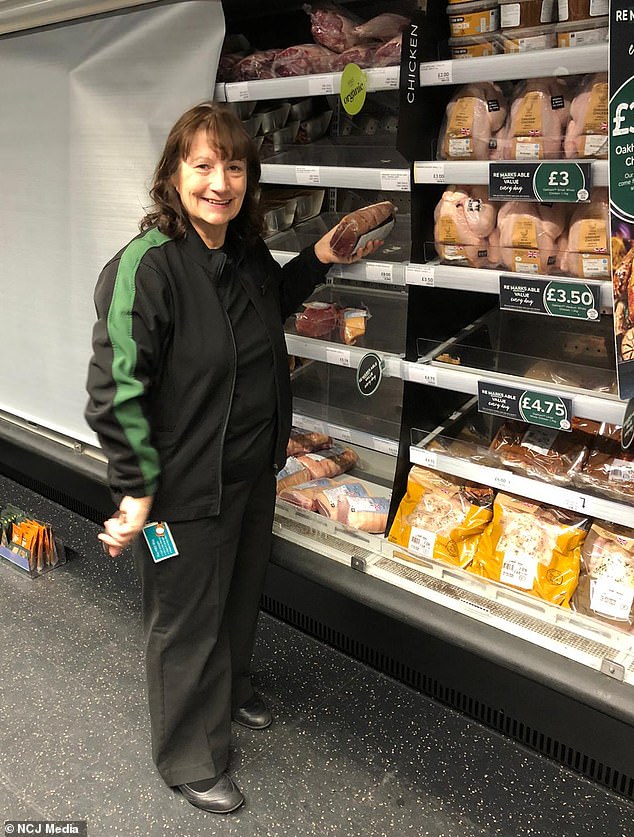 Elaine Thompson, 64, from Killingworth, north Tyneside, working at Marks & Spencer despite her lottery win 25 years ago

When Elvis impersonator Gary Ashmore, from Reading, won £1.6m at the age of 26, he ensured his family enjoyed some of the good fortune, buying his mum and dad a limited edition Mercedes Turbo and his uncle a Land Rover Discovery.

Treating himself with his winnings, Gary, who collected Elvis memorabilia and even performed an Elvis routine in local pub, bought around 13 Mercedes and put all of his efforts into becoming a pop star.

However, a few years later, he was still living with his mother and step-father and seeking a relationship.

Gary, who had a new-found hobby as a medium, was earning £20,000 a year as a service adviser for a Mercedes branch in Slough when he hit the jackpot. 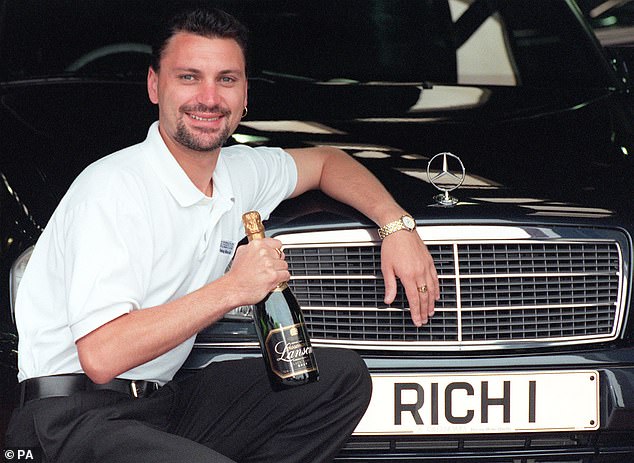 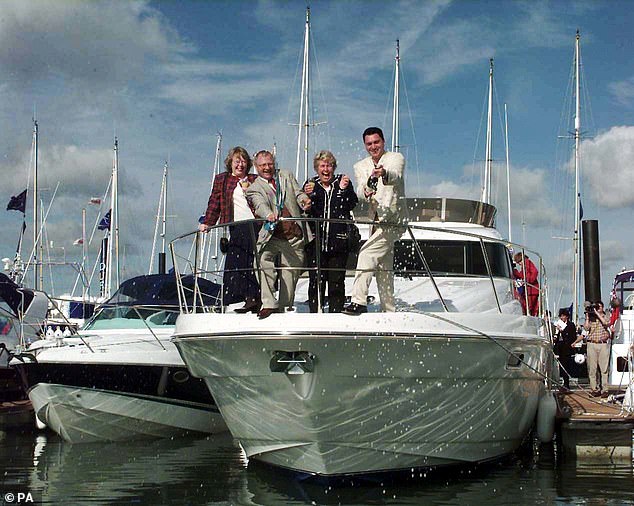 Past Lottery winners (left – Right) Christine Winters from London, James and Pat Venton from St. Austell, Cornwall, and Gary Ashmore from Reading on a Sealine T51

After changing his mind again for a SL320 worth £66,000, he paid off his parents’ £80,000 mortgage and forked out £17,000 on flights for three friends to visit Graceland, Elvis Presley’s mansion in Mephis, Tennesse.

But with boredom setting in, Gary then spent the winter renting out a £7, 000 a month bungalow in Gran Canaria with a friend – but the time abroad soon spiralled into a binge boozing session.

‘We’d have two bottles of cheap wine before we went out to give us confidence with the girls and then it would be more wine, lager and eight or nine vodkas,’ he told the publication.

‘We were addicted to vodka and Red Bull. But as someone who’s only ever been able to handle four pints, my body took a hammering.’

When Gary returned to the UK, he checked himself into rehab – and then joined a dating agency in the hope of finding a long-term relationship.

But the jackpot winner found himself on a TV show about losers in love – where Central TV paid a model £360 to date him.

It wasn’t long before Gary reportedly found himself down to £1, 0000 and living off the £5, 000-a-month interest. Before the money slipped away, he invested with partners in a bar in Reading.

‘I have always wanted to run a bar – especially an over-25s bar and the Café du Sport in St Mary’s Butts is just the kind of business I want to be in,’ he said, speaking to Berkshire Live in 2004.

Penny Haigh, now around 70, from Doncaster, who owned an engineering company with her husband John before she scooped the big win, gave the business to their three sons – before enjoying early retirement.

‘Early retirement was enjoyable but we missed working,’ she said, speaking to The Times in 2001. ‘The money meant that we could do something we always wanted and invest in a pub. We never worry about money and can take a holiday whenever we want to.’

It’s also been reported that Penny and her husband spent much of their time renovating houses – before selling them on for a health profit.

‘People think we Lottery winners must spend a fortune on our home,’ she said. ‘In fact, it’s our business.’

John added: ‘It gives us a good living so we can leave the Lottery win to grow.’ 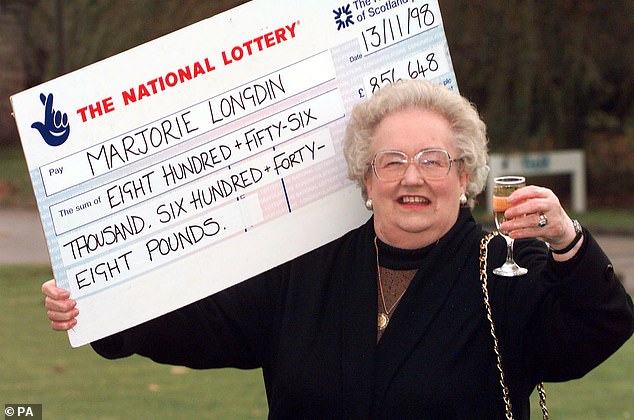 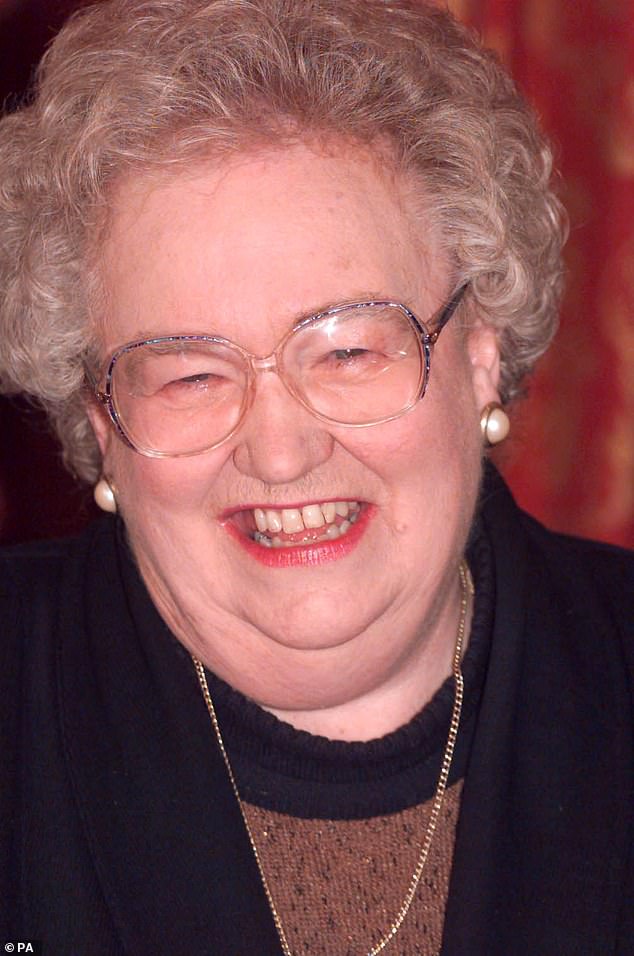 Marjorie Longdin (pictured) gifted £100,000 each for her children, £250 for the nieces and nephews, and paid out for new gates for the church

The aunt of Conservative leader William Hague planned to buy a prized ram for her Yorkshire farm, new gates for her local church and treats for her family when she hit the jackpot, aged 73.

In 2004, Marjorie, a nurse in the second world war, was still living in the same house in Tickhill as she did before her win – and she admitted to never feeling guilty about having to work for the money.

‘No! Never felt guilty,’ she told The Guardian. ‘Camelot gave me very good advice – they said, ‘Enjoy yourself, Marjorie.’

She also treated herself and the neighbours to double glazing, swapped her fake Omega watch for the real deal, and purchased a new car – not to mention embarked on several cruises.

Marjorie, who was a big fan of Sir Terry Wogan, won a Children In Need auction at the cost of £12,000 – which paid for a guest spot on BBC Two’s quiz porgramme, Call My Bluff.

She openly praised the social element of winning the jackpot which she said felt like belonging to a club – and revealed she knew jackpot winner Elaine Thompson well.

‘She and her husband were at this recent do at the Cafe Royal, and we’re like old friends,’ she said in 2004. … but I always say I’m the poor relation because I didn’t win a million.’