Many of us would normally be spending the August Bank Holiday raving in a field, sheltering in a soggy tent or dancing on the streets of Notting Hill.

This year we’ll probably be watching repeats of last year’s headliners from our sofas, with festivals cancelled by the coronavirus pandemic.

It’s left hundreds of people who work at them without a job – and in some cases with no income at all.

BBC Radio 1 Newsbeat has been speaking to some of them.

‘I had loads of work planned’

Luke Hopkins works as a rigger, building and helping set up festival stages. 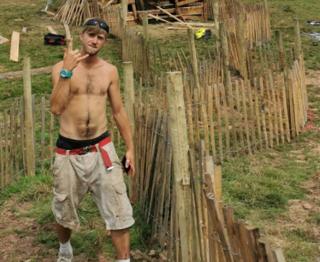 But when all festivals were cancelled this year, the 21-year-old found himself out of a job.

“I was about to book trips to America, because I was thinking I would be sorted out for money over this whole summer, as I had loads of work planned.”

Luke also works in theatre production, but there was no work there either.

“It just all went to pot. Jobs in production are just non-existent.”

Luke was able to get a grant from the government’s self-employment scheme as he had no other way of getting an income.

“It’s definitely been tough, knowing I was supposed to do months and months of works and earn loads of money, but it’s just fallen out the sky.”

For Luke though, there have been some positives.

The time off has given him space to think about what he wants to do and he’s planned to go on a climbing course, which he hopes will further his career.

Mary Shelley Smith’s been serving up food to bands and punters at festivals, including BBC Radio 1’s Big Weekend, Reading, Glastonbury and the Isle of Wight, for about 30 years.

This year, she says the company she works for, Eat to the Beat, has been left completely devastated.

“We were at the sharp end of it. Events just dropped off and off.

“It’s quite frightening – it’s knocked all of our income off.”

The company’s had to make redundancies and put staff on furlough to survive.

They managed to get some work catering for the NHS and in particular for those working at the Nightingale Hospital in Cardiff.

Artists haven’t be able to perform over the summer, and playing at festivals is something that generates a lot of their income.

James from Biffy Clyro told Radio 1 Newsbeat that while it’s been difficult, the band has had some things to keep them busy.

He acknowledges that those working behind the scenes that will struggle the most.

“It’s more the people you don’t think about – the people that keep the venues clean, sort out the lights, supply the PAs, that restock bars – I think those people are finding it most difficult to be honest.

“My heart really goes out to them.”