A security guard who shared a house with an aged care worker has been identified as the first formal link made between Victoria’s calamitous hotel quarantine program and the spread of coronavirus to an aged care home.

The state Health Department has revealed an infection went from the Rydges on Swanston hotel to Embracia Aged Care in June.

It came as the managing director of Embracia – which has had five residents in one of its homes die after contracting COVID-19 – criticised the Health Department over its poor contact tracing among aged care staff. 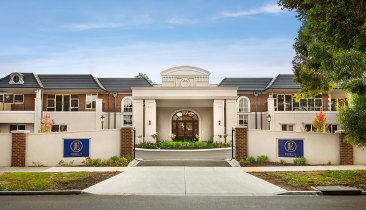 Victoria recorded 37 new coronavirus cases and six deaths on Saturday. All of those deaths were residents in aged care homes.

More than 550 elderly Victorians have died in the past nine weeks after contracting the virus in an aged care home.

Melbourne’s second wave of the virus began in May when private guards hired by the Andrews government to watch over returned travellers carried the disease into the community after working at two hotels, the Rydges on Swanston in Carlton and the Stamford Plaza in the CBD.

A report tendered last week to the inquiry investigating how the virus moved into the community found a case went from the Rydges hotel in Carlton to Embracia Aged Care.

“Preliminary information from [the] Microbiological Diagnostic Unit linking the case associated with Embracia Aged Care genomically to cases from Rydges on Swanston Street outbreak,” said the timeline in a Department of Health and Human Services report.

Embracia managing director Sarah McKenzie said: “Our staff member lived with a female security guard who had worked across these quarantine hotels.”

Embracia operates two Melbourne homes. Its Avondale Heights home has had a major outbreak involving five deaths and 32 residents and staff, as well as another 14 people connected to the centre. The group’s other home is in Reservoir, where there have been just two cases.

Ms McKenzie said the staff member linked to the Rydges guard had worked in Embracia's Reservoir home, where the virus had been swiftly contained. They did not work in the Avondale Heights centre, known as Embracia Moonee Valley, where five residents have died.

“Our first case in Moonee Valley came from Menarock,” said Ms McKenzie. That Menarock aged care home, in Essendon, has had 68 cases and seven deaths.

In a media release in June, the DHHS announced new cases of coronavirus from the Rydges hotel. Later, it noted that a staff member at Embracia Aged Care in Reservoir had also tested positive.

Ms McKenzie said that while her centre had largely managed to control the outbreaks in its two centres, the Health Department had provided it with little help in tracing the contacts of staff who brought the virus into homes.

Victoria’s Chief Health Officer Brett Sutton said on Saturday that aged care homes were responsible for informing the department of cases, and testing happened from there. “This process had worked well,” he said. "Contact tracing doesn't happen in aged care."

Ms McKenzie said while testing had been done swiftly and results returned promptly, efforts by the department to trace the links from staff back to the community were woefully inadequate.

She said after defeating an outbreak that began in July, her Avondale Heights home on Tuesday last week had a positive test in a staff member.

The case was reported to DHHS on Tuesday, but by Friday the department’s tracing team had not even confirmed it had received a list of contacts supplied by the home after detailed work.

She said letting the department’s Public Health Unit know immediately by phone had not been possible – the manager of the facility had “tried three different phone numbers for the public health unit, and no one was answering”.

Ms McKenzie said that, throughout the pandemic, efforts by DHHS to contact trace had been “frustrating” and often contained incorrect information.

“They came to us in July and asked us to help them contact trace one of our residents. That resident had died in our home. But they died in 2019, before the pandemic existed.”

Ms McKenzie also raised a problem at the Avondale Heights home which is reflected across many of Victoria’s 766 aged care homes: when there is a coronavirus case identified, residents are forced to isolate in their rooms for lengthy periods until DHHS gives the all-clear.

She said even though residents at their Moonee Valley centre had tested negative 10 times, they still weren’t allowed out of their rooms.

Some residents had spent more than 40 days in their rooms without displaying any symptoms, she said, and yet were told by the state Health Department to remain in their rooms.

“Some residents were refusing tests because they’d had 10 rounds of negative testing and were not being [allowed out of isolation]. They were saying ‘Why should we get tested again?’.”

Lee-Fay Low is an ageing and health specialist at Sydney University’s Medicine and Health department.

She said the isolation forced upon residents in aged care homes across Australia, but particularly in Melbourne, could lead to terrible sickness and premature deaths not caused by coronavirus.

“I think it’s feasible that people will die because of the lack of activity and because they are locked down, but we won't see the numbers on that for a time,” Professor Low said.

There are now 625 active cases of coronavirus among residents of Victorian aged care homes, down from 861 just over a week ago.