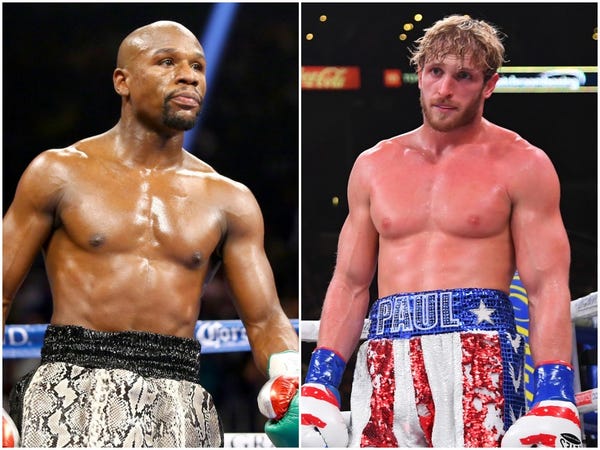 Mayweather has not competed professionally since retiring after his 10th round stoppage win over Conor McGregor in 2017, but did take part in an exhibition bout against a young kickboxer called Tenshin Nasukawa in Japan.

Since then, he has expressed interest in an exhibition tour which could generate approximately $100 million.

Most recently, a non-professional fight involving the YouTube content creator has been rumored. TMZ Sports reported Thursday that setting up the fight has been discussed, as Paul's representatives approached Mayweather's about a bout.

Those close to Mayweather are more likely to reject the offer than accept it, according to the celebrity and entertainment news site.

TMZ Sports said Paul clearly wants the fight to happen, but is unable to publicly comment. "You know I can't say s— right now," he said.

Paul, 25, has limited boxing experience, having just one pro bout on his record — a 2019 loss to fellow YouTuber KSI. The pair also fought in an amateur bout in 2018, which ended in a draw.

Exhibition bouts are all the rage right now

Though Mayweather's people are apparently preparing to refuse the exhibition offer, these types of events are proving popular in boxing.

Mike Tyson, 54, and Roy Jones Jr., 51, are scheduled to contest an eight-round exhibition in Carson, California, on November 28 in what is being billed as the first of many League of Legends showcases.

Paul's younger brother Jake Paul is even taking part on the Tyson and Jones Jr. card as he is expected to fight the former basketball player Nate Robinson.

Related posts:
TV and Movies
The truth about Sean Connery’s marriage
Daniel Craig Pays Tribute to Sean Connery: ‘One of the True Greats of Cinema’
'Dance Moms': Christi Lukasiak Jokes 'Some' of Her Former Castmates Are 'Dead' to Her in Viral TikTok
5 'Good for Her' Horror and Thriller Movies You Can Stream for Halloween
Recent Posts
This website uses cookies to improve your user experience and to provide you with advertisements that are relevant to your interests. By continuing to browse the site you are agreeing to our use of cookies.Ok