A former sky rail manager has been jailed for orchestrating a wage racket that included having taxpayer-funded labourers renovate a colleague's home.

Kory Oxley, a former manager at construction firm Lendlease and a foreman on the project to remove level crossings on Melbourne's south-eastern train lines, approved shifts for work that was never done and took cash from his workers as a kickback. 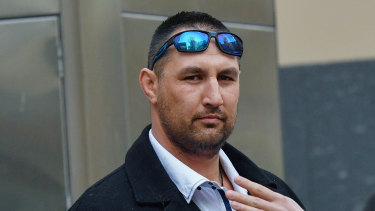 The racket, which Oxley referred to as "cheese days", resulted in $90,000 in wages being approved for work that was never done. Oxley reaped about half of that sum in cash kickbacks, the County Court heard on Thursday, which he used to buy a caravan and boat.

Also in 2018, Oxley organised for 26 labourers to work a weekend at colleague Steven Winter’s Selby home and build a fence, paint buildings and move a large wood pile all at taxpayers' expense. Winter wanted the work done before he and his family took an overseas holiday.

Oxley, 37, was on Thursday jailed for nine months after earlier pleading guilty to two charges of obtaining a financial advantage by deception and one of dealing with property suspected of being the proceeds of crime.

Judge Kevin Doyle said Oxley abused his position of power, spread a culture of dishonesty within his workforce and at times bullied staff into taking part in the racket. He had told one worker: "You're either going to be part of the ship or you're going to be thrown off."

"You were in a position of trust. You were a well-paid manager for Lendlease. You had the responsibility of authorising workers' payments. You breached this trust repeatedly and over an extended period."

His sentence comes five months after Winter, a one-time construction manager on the Caulfield-to-Dandenong sky rail project, was put on a community correction order and told to repay more than $90,000 over the wages paid out for the work done on his home.

Oxley was using the drug ice in 2018, the court heard, and his offending breached his own community correction order, which was previously put in place after he assaulted one of his sons. The father of five used drugs to cope with stress, the court heard.

Judge Doyle said the guilty plea spared the costs of a long trial and showed some remorse. He also acknowledged Oxley was concerned about the possibility he might be deported to his native New Zealand when released from prison.

Oxley must start a 15-month community correction order once released, including requirements he do 100 hours of unpaid work and be treated for alcohol, drug and mental health problems.