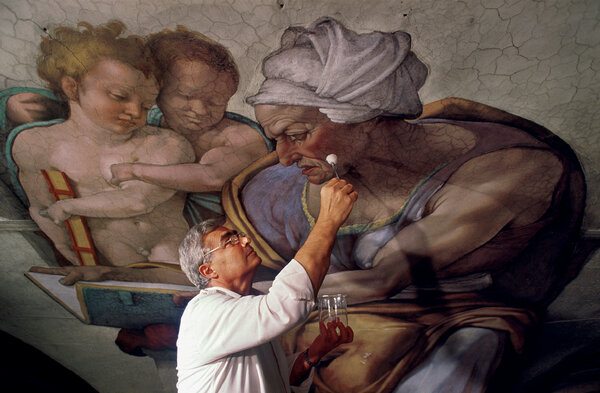 Gianluigi Colalucci, the chief restorer of the Vatican Museums who led what was known as the restoration of the century — the cleaning of the Sistine Chapel — and in so doing revealed a new vision of Michelangelo’s storied, complex work, died on March 28 in Rome. He was 92.

The Vatican Museums announced his death but did not specify a cause.

It took Michelangelo four years to create the ceiling frescoes of the Sistine Chapel, and six more to paint his roiling, swirling Last Judgment on the altar wall, and almost immediately both works were under assault.

Soot, smoke and dust in what was always a working chapel began to darken the once-vivid colors. And starting in 1565, after years of criticism that deemed the naked figures of the Last Judgment obscene, decorous draperies were painted over their genitals. (Michelangelo refused to do that work, declaring of Pope Pius IV, “Let him make the world a suitable place, and the painting will fit in.”)

In the five centuries since, the vast expanses of the Chapel only grew darker, with various attempts to protect it — varnishes and glues — further muddying the work.

But in 1980, Mr. Colalucci, a veteran Vatican conservator, and his team began to carefully clean and restore the chapel. What their efforts revealed stunned the world. Michelangelo’s hues were bold, clear and bright — apple greens, startling blues, rosy peaches. Gone were the somber, shadowy images. Michelangelo, it turned out, was a masterful, even revolutionary, colorist, and a virtuoso at fresco.

“It changed art history,” said Carmen C. Bambach, a curator at the Metropolitan Museum of Art and a Renaissance scholar who saw the work first hand as a young graduate student. “All of a sudden there was a new Michelangelo.”

Not everyone was thrilled. Some critics did not like this new Michelangelo. They found his true colors garish. They charged that the cleaning was damaging the work itself.

They claimed that in addition to working in buon fresco — or true fresco (applying pigment to wet plaster, that then carbonizes and sets as it dries) — Michelangelo had also worked a secco (painting on dry plaster, a less enduring process) to amplify various sections, and that Mr. Colalucci was erasing that work.

The criticisms were vicious and sustained, and came from art historians and even a group of contemporary artists that included Robert Motherwell and George Segal, who signed a petition asking that the restoration be stopped.

In reviewing the restoration in 1990, Michael Kimmelman of The New York Times said, “The Sistine ceiling may no longer look the way some people think Michelangelo should look, but that says more about the expectations of those people than about the results of this extraordinary restoration.”

And the critics were not on site, peering over Michelangelo’s shoulder, as Mr. Colalucci and his team were, painstakingly investigating every brush stroke, and every centimeter. Restoration is intimate work. The entire project took 14 years, during which time Mr. Colalucci’s hair turned silver. As for the post-Michelangelo drapery, the restorers were able to remove nearly half of it.

“From 1980 to 1994 Mr. Colalucci got to know Michelangelo’s work intimately, and meditate on it, and that is an awfully long time,” Dr. Bambach said. “That was a journey in itself. A lot was learned as the work of cleaning the Sistine Chapel frescoes progressed. Michelangelo’s technical virtuosity was in many ways hidden until the cleaning, which revealed a sense of the artist’s process, capturing it with a breathtaking sense of immediacy, as the work was in the act of being created.”

Mr. Colalucci, she said, was a brilliant, experienced conservator and committed to the arduous, lengthy process, but most of all he was brave. “It look a lot of courage to do what he did.”

While he admitted to a feeling of anxiety in the late 1980s, when the critics were at their most vociferous — Italy’s Communist newspaper called him a “restoration assassin,” while one exasperated art historian countered by comparing the critics’ claims to “the wild cries of some ferocious mutant Chicken Little” — he remained a serene and steady presence, a soft-spoken, polite man clad in tweeds and deck shoes. He liked to sketch his colleagues, and the laboratory where they worked.

“I feel like a soccer player before a championship game these days,” Mr. Colalucci told The New York Times in 1987. “I wish I could go on a retreat and be entirely cut off from the world so that I could concentrate on what I have to do and not these other things. This all creates a kind of stress which doesn’t let you work with tranquillity.”

And he had the approval of his boss, as he told an Italian newspaper in 1988. Though Pope John Paul II had not been up on the scaffolding, Mr. Colalucci said, he seemed to be happy with the restoration. If not, he added, “he would have stopped the work, or simply fired me.”

Gianluigi Colalucci was born on Dec. 24, 1929, in Rome. He grew up there, and as a child played on the steps of the Piazza del Campidoglio, which was designed by Michelangelo.

He studied at the prestigious Istituto Centrale per il Restauro in Rome, graduating in 1949. He joined the Vatican in 1960, becoming chief restorer in 1979. He retired in the mid 1990s, but continued to advise on the Vatican Museums’ ongoing restorations.

In a statement, Barbara Jatta, director of the Vatican Museums, noted his grace under pressure, “never shaken by media controversy,” as he “helped to rewrite a page of art history, and the history of restoration.”

Mr. Colalucci had two sons, and his survivors include his wife, Daniela, who is also a conservator.

“There comes a day for each of us when nothing will ever be the same again,” Mr. Colalucci wrote in an undated article for National Geographic Traveler. “For me that day was April 8, 1994, when Pope John Paul II celebrated a Mass in the Sistine Chapel,” when the famous frescoes, he said, became transfigured by the ceremony.

“I felt like I had been struck by a bolt of lightning, and suddenly understood two important things: the transcendent spirituality of Michelangelo’s paintings and the true meaning of working inside the Vatican.”