When federal Treasurer Josh Frydenberg stands up in Parliament on Tuesday night to deliver his third budget, he will have a good story to tell. For all the dire predictions – which were justifiable at a time when the economy was falling off a cliff – the speed of the rebound has surprised most.

Navigating the response to the pandemic did not come easily to the Morrison government. After many years of decrying the demons of debt and deficit, it had to do an about-face and embrace what it had hitherto considered economic heresy. 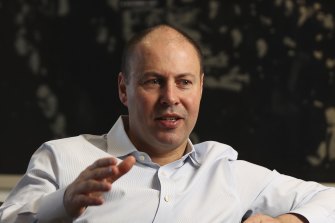 Treasurer Josh Frydenberg needs to be clearer on the path back to surpluses. Credit:Alex Ellinghausen

To its credit, the Coalition, along with governments worldwide, quickly grasped that the only way to compensate for lost wages and business revenue during the strict lockdowns was to start shovelling government money out the door at an unprecedented rate.

In large part thanks to JobKeeper (which alone pumped about $90 billion into the economy) and JobSeeker, topped up with targeted support of those sectors worst affected, the vast majority of Australians were able to stay afloat financially.

Recently, Mr Frydenberg was adamant he has no intention of tightening the purse strings until the unemployment rate is comfortably in the 4 per cent range. In no small way, this target has come from pressure exerted by Reserve Bank governor Philip Lowe, who has been a strong advocate of getting unemployment as low as possible during the recovery.

But with the official cash rate at 0.1 per cent, the Reserve is relying on the government to continue stimulating the economy. In a further incentive for Mr Frydenberg to keep spending, Mr Lowe has made it clear that inflation is unlikely to go above the Reserve’s preferred range of 2 to 3 per cent any time soon.

But all spending sprees must reach an end. Government debt is at an all-time high of $833.5 billion and is on track to reach $1 trillion by the end of the decade. While it won’t be soon, there will be a time that the debt will need to be reined in. If it stays too high, the government of the day will be severely hamstrung next time the economy gets hit for six.

While Mr Frydenberg is right to say that growth in the economy, fuelled by ongoing government spending, will be a substantial driver in paying back the deficit, it cannot do it alone. At some point, the difficult decisions in pulling back on spending will also need to play their part.

It is therefore surprising that the Coalition has quietly gone about dropping its medium-term fiscal and budget repair strategy. Sitting in the 2018-19 budget, which was the final one Prime Minister Scott Morrison delivered as treasurer, there was a clear policy framework of wanting to deliver “sustainable budget surpluses building to at least 1 per cent of GDP as soon as possible”.

To reach that goal, it had a set of principles that provided the guard rails against overspending. Some may have been relatively simple, such as no new spending without finding equivalent savings, or banking any unexpected windfall of receipts due to changes in the economy, but they were valuable criteria on which to measure how well the government was following its objective of bringing down the deficit.

There is always a good amount of smoke and mirrors in every federal budget, so any yardstick to measure a government’s performance is most welcome. Mr Frydenberg has proven himself capable of steering the economy back from the brink, but this is a marathon, not a sprint. Laying out the benchmarks for Australia’s long-term recovery will be a crucial step in that journey.

The Age’s editor Gay Alcorn writes an exclusive newsletter for subscribers on the week’s most important stories and issues. Sign up here to receive it every Friday.