There will be no Easter roadblocks on holiday routes such as the Great Ocean Road but police are set to patrol tourist destinations along the coast with "much more intensity" to catch those flouting coronavirus restrictions.

Victorian Senator Sarah Henderson has called for holiday traffic on the Great Ocean Road to be stopped at police roadblocks but Police Minister Lisa Neville said such a course of action was not backed by health advice. 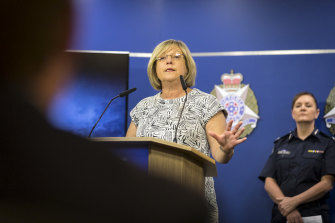 Lisa Neville says there will be no roadblocks on the Great Ocean Road.Credit:Chris Hopkins

"I know there'll be some people who do the wrong thing this weekend. But I also have a great deal of faith in Victorians … overwhelmingly people are doing the right thing," Ms Neville said on Thursday morning.

"I don't think we need at this point to be considering things like roadblocks."

Another 16 people have been diagnosed with coronavirus in Victoria, taking the total to 1228 cases.

While it is legal to visit your holiday home this weekend, authorities are urging Victorians to stay in their primary residence and not to travel. 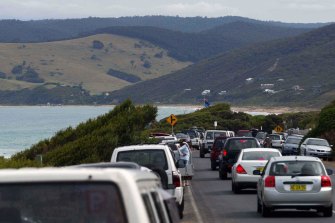 The Great Ocean Road usually gets quite busy over Easter.Credit:Shannon Morris

"It is going to be a very different Easter than we're used to," Ms Neville said.

"Stay at home, create some new traditions. Plan for the Easter Bunny to turn up to your primary residence."

Police are set to be enforcing the stage 3 restrictions in Victoria over the Easter weekend with "much more intensity" as authorities urge people to stay home and not to travel over the long weekend.

Deputy Commissioner Shane Patton said a lot of fines were being issued to people who were also allegedly committing criminal offences, including drug offences or burglary.

Young groups of people are also being fined for "aimlessly" driving around, while others have been caught hosting dinner parties, parties at Airbnbs, and drinking in the streets or in parks.

Police revoked two fines issued earlier this week amid complaints from people that the coronavirus laws are unclear, including a learner driver who was fined $1625 for going for a driving lesson with her mother.

The powerful police union has defended its members against criticism that unnecessary fines are being issued and say their officers have been given a difficult task in enforcing new restrictions to stop the spread of the virus. 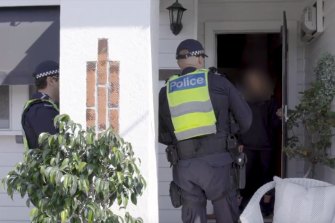 Police visit a woman who recently returned from Bali to ensure she is self-isolating. Credit:Victoria Police

Wayne Gatt, the secretary of the Police Association Victoria, said police had not written the rules and criticism of them was misplaced.

“Our members have the difficult task of enforcing new rules that have been rightfully introduced to protect the community in a time and circumstance like no other," he said.

"Criticism of them for doing so is misplaced. They have not written these rules, they are simply enforcing them.”

“We hope that everyone in the community asks themselves: ‘do I need to be out?’ before our members do. It shouldn’t be a hard question to answer.”

On Thursday Mr Patton said the restrictions were "new to everyone" and it was difficult to be prescriptive when issuing fines, urging a commonsense approach for officers as they work through different scenarios.

"A key message that I sent to members was when issuing infringements is to make sure they are thinking about, 'Would I be comfortable if this infringement was issued to a family in these circumstances? Or would a warning apply'," he said.

When police are giving out infringements they should be looking for deliberate, blatant and obvious breaches of the rules, he added. Hundreds of warnings are also being issued each day.

"We are not perfect … we will get this wrong in some occasions. But when we get it wrong we will fix it."

Sergeants at local police stations will be checking that fines are legitimate and appropriate and there is also an online process where people can apply for the the fine to be reviewed by an independent party.

If they are still unhappy with the outcome they can go to court.

On Tuesday and Wednesday, video gamers, a bikie house gathering and an inner-city dinner party that ended up costing guests more than $11,000 were among those fined for breaking Victoria's coronavirus lockdown rules.