"My wife pregnant my life is great," the 40-year-old rapper announced on Instagram on Friday, Aug. 14. 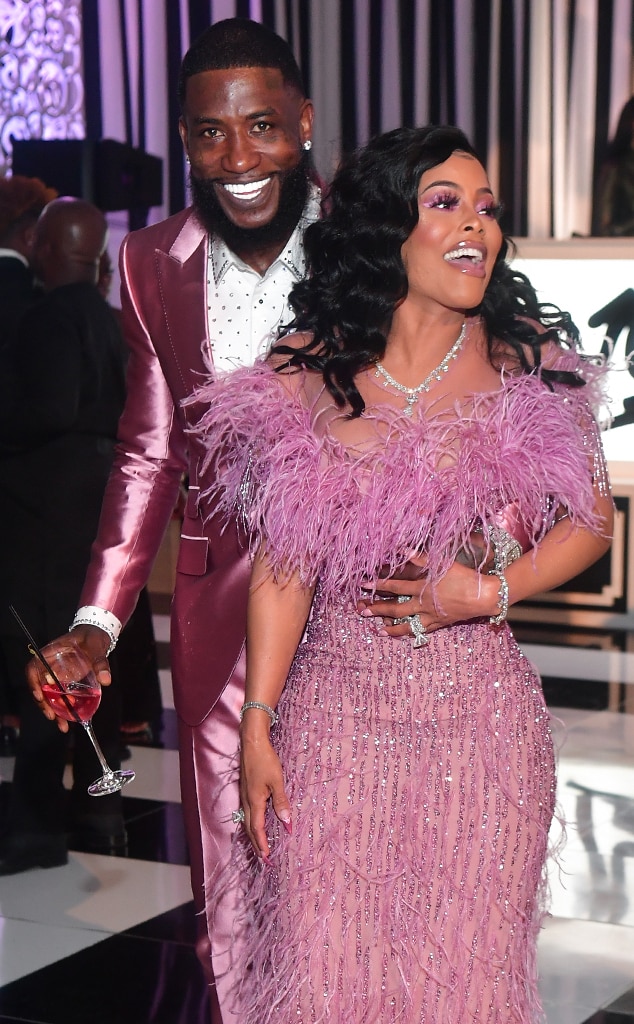 Gucci Mane and Keyshia Ka'oir's family is getting bigger!

The longtime couple announced the sweet and special news that they are expecting their first child together. "My wife pregnant my life is great," the 40-year-old rapper shared on Instagram on Friday, Aug. 14.

Soon after, the KA'OIR Cosmetics founder and model also took to her own page with a cheeky post about the baby news. "I ain't athletic but on @laflare1017 D I did gymnastics," she wrote.

In true Keyshia fashion, her pregnancy photos were anything but basic. She posed with a sexy black lingerie set that she accessorized with mesh stockings, massive diamond jewelry pieces and matching silver sparkly stiletto nails.

Her glam was also on-point and enhanced her pregnancy glow. She showed off her glimmering highlight, perfectly nude lip gloss and dramatic false lashes.

"My wife," Gucci Mane commented on his wife's photo with a red heart emoji.

Fans of the couple know they have been proud parents to their kids from previous relationships.

The rapper shares 12-year-old son Keitheon with his ex Sheena Evans, while Keyshia has three children from a previous relationship. In the past, the model has been adamant about not putting her little ones in the spotlight.

After getting married to Gucci Mane in Oct. 2017, Keyshia explained her reasoning for keeping her children away from the cameras, which also included not having them filmed during her and her husband's televised wedding.

Chrissy Teigen Reveals How She Found Out About Her Surprise Pregnancy

Everything We Learned About Chrishell Stause's Bombshell Divorce

"Gucci and I both have children," she said in an interview on The Breakfast Club in Oct. 2017. "It's a situation where I'm proud to be a mother, but at the same time, I need it to be private. I don't want the kids in the limelight. I don't want them on social media. I need them to go to school and just be children."

The couple will soon celebrate their three-year wedding anniversary, however, they've been together for nearly a decade.

"Gucci has always meant a lot to me. A lot of times, I feel like he's misunderstood. I know that I'm one of the few people that really understands him," the model told Fader in 2017. "I was his biggest support system, and no matter what he goes through I'm going to be there for him. Why would I turn my back on him now?"

At this time, the pair has yet to share any details about their little one. It's unknown how far along Keyshia is and if the two already know the sex of their baby.