Have a whale of a time! SALLY MORRIS picks the best children’s reads this summer

Another outing for the willing but accident-prone Mini Rabbit who is tasked by his surprisingly trusting mother with urgently posting a very important letter in the nearby town . . . Chaos ensues, of course, but there’s a funny ending and the pictures are packed with detail.

From the creators of Giraffes Can’t Dance, a new, life-affirming rhyming story about a young elephant who fails to impress the bullying King with his talent and is refused an honorary name. Rejected, he befriends other animals who reassure him that being kind and true to himself is more important than any tricks. A treat from trunk to tail. 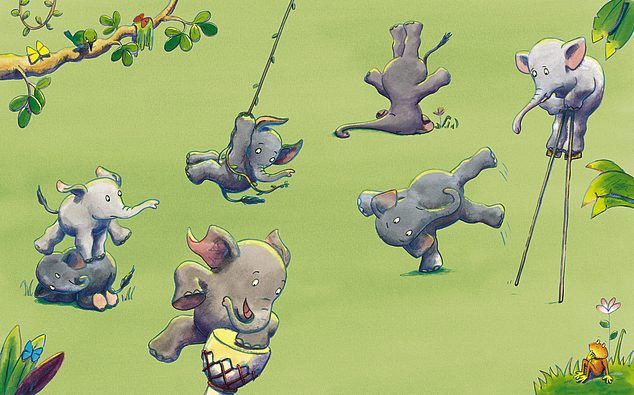 ELEPHANT ME by Giles Andreae, illustrated by Guy Parker-Rees (Orchard £12.99)

I’M STICKING WITH YOU

I adore this hilarious story of a huge bear, who so dotes on his tiny squirrel friend that the smaller creature eventually cries out to be left alone. But solitude, tidiness and routine prove joyless and soon he yearns for the warmth, love and companionship of his lumbering chum. Full of expression and humour, it’s charming.

WHERE THE SEA MEETS THE SKY

Celebrating curiosity, bravery and adventure, this stunning book takes baby otter Sophie on a thrilling journey through the underwater world as she tries to find the answer to the question, ‘What’s at the place where the sea meets the sky?’ The change of light as the day fades into night is especially beautiful and the seascapes, bubbling with life, will captivate for hours.

We’re at the zoo with keeper Bob McGrew but Robbie Robot, whose job it is to pick up the poo, has disappeared! Enter Arabella Slater, the number one ‘number two’ detective, who follows the clues as the stinky deposits pile up. This is ridiculous, riotous fun, perfect for reading aloud.

All aboard for a thrilling ride on The Highland Falcon steam train as bored young Hal and his uncle Nat discover a jewel thief has snuck on board and is planning to steal a royal diamond. Can they save the day?

Packed to the luggage racks with red herrings and dodgy characters, this Agatha Christie-style romp blows all the right whistles. Age 8+ 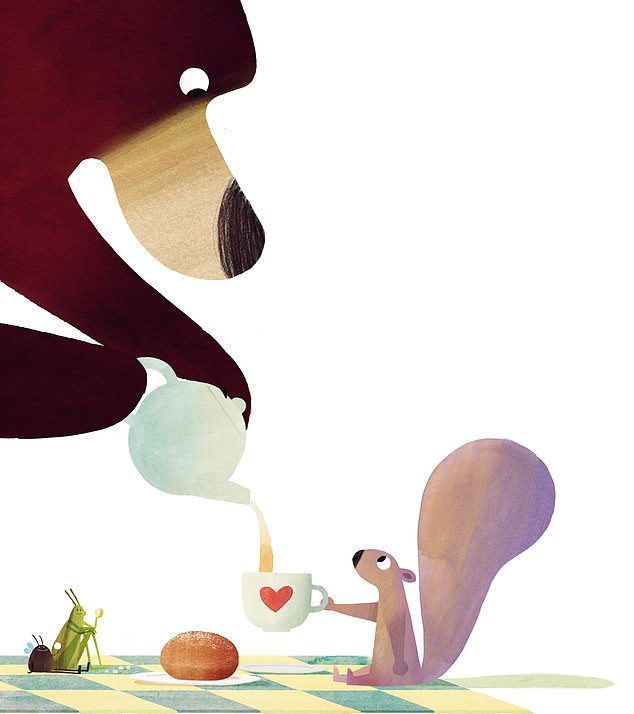 I’M STICKING WITH YOU by Smriti Halls, illustrated by Steve Small (S&S £6.99)

This atmospheric adventure from the first Children’s Laureate Wales tells of Wilde, who is sent to live with her eccentric aunt because her father is abroad and her mother is dead.

But during rehearsals for a school play about the legend of a local witch, children receive curses and strange things start to happen around Wilde.

Why? And why will no one tell her the truth about her mother? A bubbling cauldron of mystical tension. Age 8+

A SPRINKLE OF SORCERY

It’s the second outing for the Widdershins sisters, first introduced in A Pinch Of Magic. One night, the three girls rescue a wet, exhausted waif and a magical will-o’-the-wisp, on the run from kidnappers.

But when the youngest Widdershins child is abducted instead, the ever-resourceful Betty must go in search of her.

Torak and Renn’s life in the forest is shattered when Renn inexplicably disappears. Torak and his spiritual companion Wolf follow her tracks, encountering Renn’s malicious dead mother and a deceitful demon before battling the forces of evil.

Rich with descriptions of the natural world and imaginary kingdoms, a must for all Wolf Brother fans. Age 10+

‘There was a man made of midnight and his name was Shadow Jack . . .’ So begins this chilling thriller that sees Lara, the last of a coven of witches, battle ruthless Jack for ownership of a clockwork bird that contains the only spell capable of holding back the darkness of the Evernight.

Full of deadly threats and menacing moments, it cracks on at terrific pace and leaves us desperate for the next title in this trilogy. Age 10+

This is a glorious examination of the emotional complexities of childhood when everything in life changes.

Ten-year-old Bea’s parents are divorced and her dad is now marrying his gay partner, who has a daughter the same age as Bea, bringing her the sister she has longed for.

But Bea’s backstory reveals moments of rage and confusion that lead her to make choices which threaten her new-found happiness. Wonderful, engaging characters and authentic voices make this funny, bold and poignant. Age 10+ 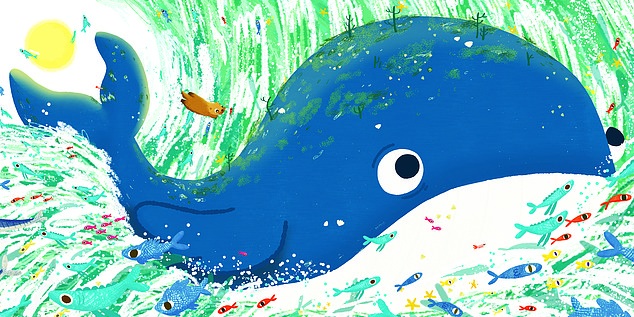 WHERE THE SEA MEETS THE SKY by Peter Bently, illustrated by Riko Sekiguchi (Hodder £12.99)

The teenage unnamed narrator is on holiday with her two brothers and sister, at her family’s beachside home. But their routine is thrown into confusion by the arrival of two American brothers who are staying with a neighbouring family.

One boy is glamorous, one surly, but their relationships with the siblings over a few weeks has devastating consequences.

A perfectly-pitched look at adolescent loss of innocence, it balances dark manipulation with sharp humour.

Kazimir, a Russian blue dragon, is hired by Sarah Dewhurst’s widowed father to help clear their farm. But Kazimir is secretly here because of a prophesy — one which may destroy the world if he doesn’t intervene.

Enter dragon-worship cults, a hired assassin, FBI agents, a time-slip love story… FABULOUS in every sense of the word.

This clever, sensitive, funny novel will appeal to teenage girls as it traces one summer holiday when 16-year-old Adelaide, whose younger brother is being treated for drug addiction, falls in love with charismatic Jack.

Each meeting is replayed in ‘parallel universes’, with different conversations and consequences for the main characters. But there’s an emotional depth that gradually reveals itself as Adelaide’s grief and loneliness hamper her chances of happiness.

In the sweltering summer of 1976, a dolphin swims into Carrig Cove, near Donegal. Emer, 17, and her friends bond with it, secretly swimming at night. But she also falls in love with local boy Dog Cullen, whose reputation as a tough guy precedes him.

When a rival gang try to kidnap the dolphin, the jealousies and suffocating bigotry of small-town life combust in the heat with consequences that change everyone’s life.

Based on Irish legend, this is full of atmosphere and tension.