A new COVID-19 vaccine that fires proteins in the body that destroy the virus within two weeks is just a few months from human trials.

The ‘highly scalable’ vaccine is the first peer-reviewed antidote to the coronavirus that currently has much of the world in lockdown or isolation.

Researchers from the University of Pittsburgh say the new treatment would be delivered through a ‘painless jab’ similar to the annual flu vaccine.

The team from the US have tested the vaccine on mice and estimate that it should be able to neutralise the deadly virus for at least a year. 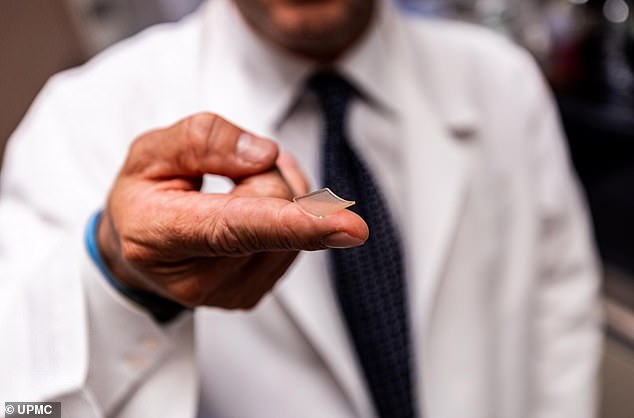 An industrial-style production process has been used to produce the Pittsburgh Coronavirus Vaccine – PittCoVacc – making it ‘highly scalable’.

This is the first COVID-19 candidate vaccine that’s been scrutinised by independent scientists. The findings are published in The Lancet’s EBioMedicine journal.

HOW WOULD THE VACCINE BE DELIVERED?

The vaccine would be delivered to the skin via a tiny fingertip-sized patch.

This is enough to let the body produce quantities of antibodies high enough to neutralise the virus for a year.

The novel delivery system is called a ‘microneedle array’.

It has 400 tiny needles that deliver the spike protein pieces into the skin and increase the potency.

It goes into the skin as that is where the immune reaction is strongest.

The patch goes on like a plaster and then the needles dissolve into skin.

The needles are made of sugar and protein pieces containing the antibody triggering vaccine.

It was a method used to deliver the smallpox vaccine – but more high tech.

Doctors say it is ‘pretty painless – it feels like Velcro’.

The researchers are now applying for approval from the US Food and Drug Administration and aim to start the first human trial and hope to be able to begin those trials within months.

Senior study author Professor Louis Falo, from the University of Pittsburgh, said getting to human tests stage would usually require at least a year or more.

‘This particular situation is different from anything we’ve ever seen, so we don’t know how long the clinical development process will take.

‘Recently announced revisions to the normal processes suggest we may be able to advance this faster.’

The Pittsburgh team were able to act quickly because they had already laid the groundwork during earlier coronavirus epidemics.

Senior study author Professor Andrea Gambotto, also at Pittsburgh, said they knew exactly where to go in terms of ways to fight the virus.

‘These two viruses, which are closely related to SARS-CoV-2, teach us that a particular protein, called a spike protein, is important for inducing immunity against the virus.’

She added: ‘That’s why it’s important to fund vaccine research. You never know where the next pandemic will come from.’

The PittCoVacc vaccine is more conventional compared to the experimental mRNA vaccine that has just begun clinical trials.

It works like a flu jab, penetrating the skin with lab-made pieces of viral protein to build immunity, the researchers explained.

The team also used a new approach to deliver the drug, called a microneedle array, to increase potency.

This array is a fingertip-sized patch of 400 tiny needles that delivers the spike protein pieces into the skin, where the immune reaction is strongest.

The patch goes on like a plaster and then the needles – which are made entirely of sugar and the protein pieces – simply dissolve into the skin.

Professor Falo added: ‘We developed this to build on the original scratch method used to deliver the smallpox vaccine to the skin.;

Falso said it is a high-tech version that is more efficient and reproducible patient to patient. Adding: ‘It’s actually pretty painless – it feels kind of like Velcro.’

A ‘cell factory’ produces multiple layers of cultured cells engineered to grow the spike protein, that can be stacked further to multiply the yield.

This makes the vaccine ‘highly scalable’, according to the Pittsburgh team. 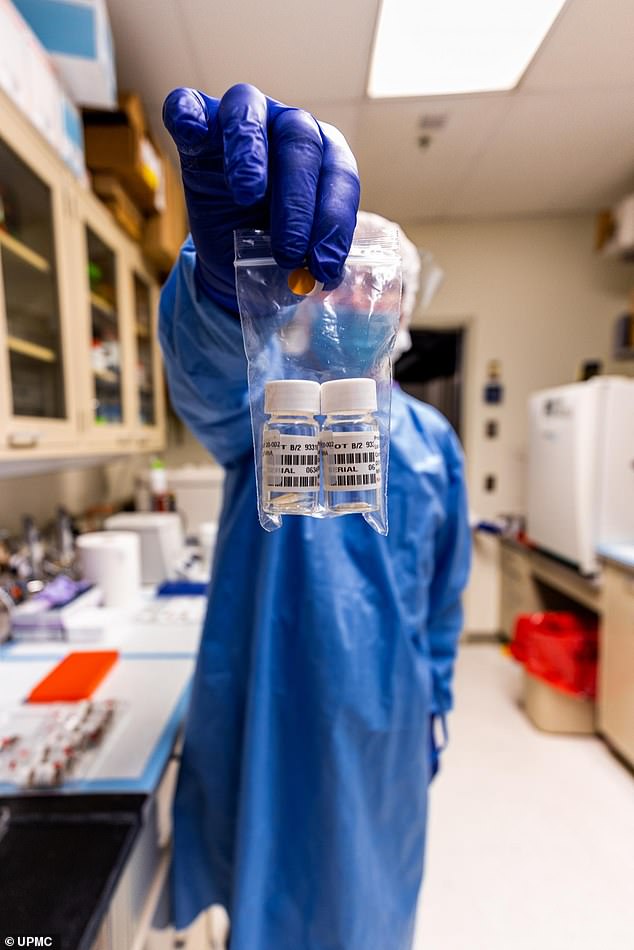 ‘For most vaccines, you don’t need to address scalability to begin with, but when you try to develop a vaccine quickly against a pandemic that’s the first requirement,’ said Professor Gambotto.

Once manufactured, the vaccine can sit at room temperature until it is needed, eliminating the need for refrigeration during transport or storage.

When tested in mice, PittCoVacc generated a surge of antibodies against the coronavirus within a fortnight.

Those animals haven’t been tracked long term yet, but the researchers point out that mice vaccinated for a much-smaller coronavirus outbreak in 2014 produced enough antibodies to neutralise the virus for at least a year.

The team said that so far the antibody levels in animals vaccinated for COVID-19 seem to be following the same trend.

Importantly, the COVID-19 micro-needle vaccine still works even after being thoroughly sterilised with gamma radiation – which is key if the product is suitable for use in humans.

It comes as both traditional drug makers and outsiders alike contend for the lead in an intensifying race for an antidote.

Johnson & Johnson, the world’s biggest pharmaceutical company, says it is confident it has a COVID-19 vaccine and wants to start producing ‘a billion vaccines’ by early next year.

Meanwhile, British American Tobacco (BAT), the world’s second-biggest cigarette producer, has announced it would be ready to start mass production within three months.

The findings have been published in the Lancet journal EBioMedicine.

WHAT ARE THE SYMPTOMS OF CORONAVIRUS?

Like other coronaviruses, including those that cause the common cold and that triggered SARS, COVID-19 is a respiratory illness.

The most common symptoms are:

Although having a runny nose doesn’t rule out coronavirus, it doesn’t thus far appear to be a primary symptom.

Most people only become mildly ill, but the infection can turn serious and even deadly, especially for those who are older or have underlying health conditions.

In these cases, patients develop pneumonia, which can cause:

Some patients have also reported diarrhea and kidney failure has occasionally been a complication.

Avoid people with these symptoms. If you develop them, call your health care provider before going to the hospital or doctor, so they and you can prepare to minimize possible exposure if they suspect you have coronavirus.