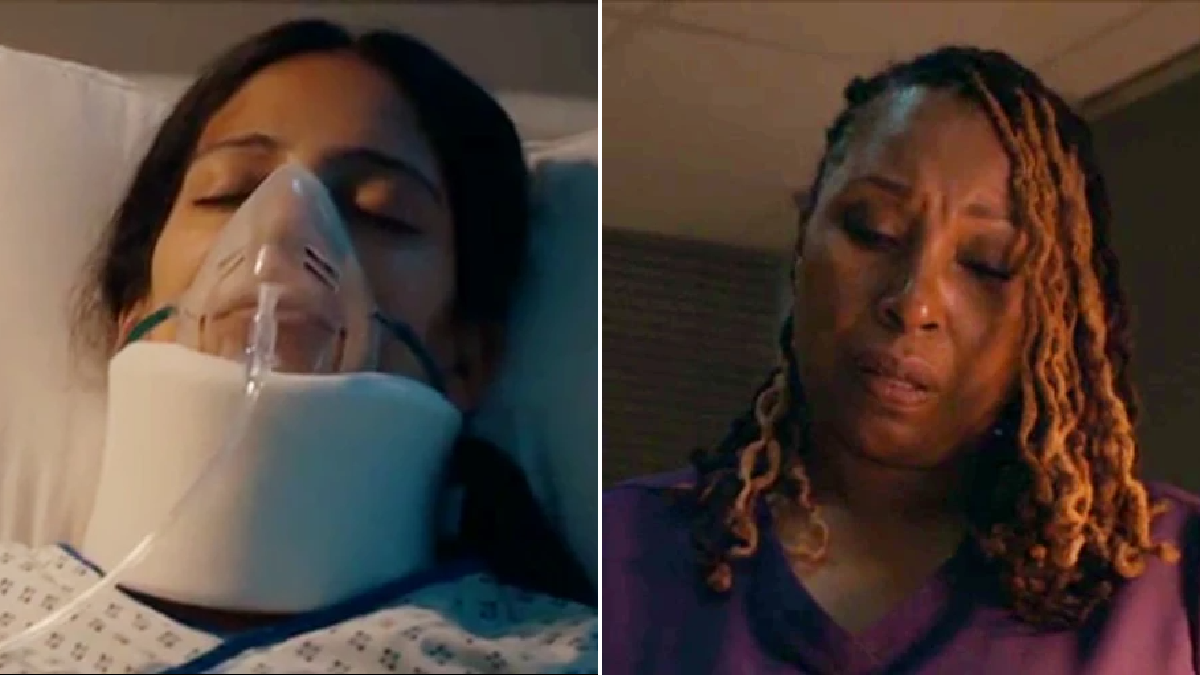 While Jeni Sinclaire (Debra Stephenson)’s sex party empire is presumably over and Jeni herself is awaiting whatever the law can throw at her, back at Holby City hospital she’s left wounds that will take a long time to heal. In the case of Lucky Simpson (Vineeta Rishi), she might even be permanently paralysed.

Evie (Phoebe French) and Fletch (Alex Walkinshaw) seem to be coming out of the terrible events better than anyone else, mainly because Evie has been able to be open to Fletch about what happened to her. Once his shock had worn off a little bit, Fletch could listen to her without being judgmental and this is going a long way to helping both of them heal.

Mia (Brianna Shan) and Donna (Jaye Jacobs) weren’t so lucky. Donna felt she’d failed as a mother to Mia and this made her direct her anger towards Evie and Fletch. She couldn’t really cope with the awful things that had happened to Mia so she shut down, unable to talk to her and give her the support that she needed. This made Mia feel guilty and lonely.

Ever since Mia came into Donna’s life we’ve seen her sometimes assume the role of the adult in the relationship, and she had to do it again in this episode. When Donna told her, ’Can you not see what this is doing to me?’ Mia reminded her that the abuse happened to her, not Donna. Eventually we saw a breakthrough when mother and daughter had a talk on the hospital roof. Donna listened as Mia described the awful things that happened to her at Jeni’s parties, and Donna realised the most important thing she could do was to listen to and trust her daughter – and remind her that she’s not to blame.

So Donna and Mia’s relationship has had a reset, but it’s going to be a very long time before Donna is ready to forgive Fletch.

Meanwhile, Jac (Rosie Marcel) was trying to impress a woman called Jo Fields(Eloise Black), who was at Holby to assess whether the hospital would be a suitable venue for some ground-breaking research. Jac did manage to impress Jo (and us) by speaking Mandarin – who even knew that was one of her many skills? In all other respects Jo was not impressed and this was partly because the hospital is a bit of a mess, what with having had a ward blown up by a former employee recently and having its director of finance arrested for sex crimes. It didn’t help that Jo was a former F1 who hadn’t lasted long thanks to Jac’s particularly savage brand of mentoring.

Luckily the very wonderful Josh Hudson (Trieve Blackwood-Cambridge) saved the day by pleading the case in favour of Jac and Holby, despite referring to Jac as a ‘dragon’ and an ‘ogre’ in Jo’s hearing previously. So it looks like Holby might get the cutting-edge therapy after all – which may also have positive benefits for Jac’s brain tumour.

The Louis (Tyler Luke Cunningham)/Kylie (Amy Murphy) romance looked like it was off again tonight when the horrible Mel (Naomi Preston-Low) turned up unexpectedly and it was immediately apparent that Louis had forgotten to mention that he was in love with Kylie and not her.

Mel is very devious, and when she realised Louis was trying to dump her she pretended to be upset about her ill grandfather so he’d feel too guilty to upset her. Eventually Louis did manage to tell Mel what was going on. He told Kylie that the only Disney Princess he wants is the Scouse one. Even though he did look a tad over-dressed for bowling.

Sue Haasler is the author of five novels and the official BBC Holby City book, which you can read about here.