All hail the LILF! These aristocratic dads make being a ‘later-in-life father’ cool, according to Tatler – and their children enjoy Tuscan holiday homes, country estates and royal connections

These blue-blooded 50-somethings all have something more in common than just their impeccable social pedigree and vast family estates: they are all proud fathers to children of primary school age or younger.

Whether they became first-time fathers in their late 40s, like the Marquess of Cholmondeley, or added to their large broods after remarrying for the second or third time, they are all proof that being a ‘LILF’, or ‘later-in-life father, is the ‘new cool’, according to Tatler.

The group includes the Earl of Durham, 58, who welcomed his three youngest children in his 50s, as well as Earl Spencer, 55, the younger brother of Princess Diana, who lives at Althorp House with his wife Karen and seven-year-old daughter Lady Charlotte Diana.

Their children are certainly benefiting from being born to an aristocratic father who’s established himself over a number of decades, with holidays in Tuscan villas, family ski trips to lavish chalets and royal connections among the perks they enjoy.

Here, a closer look at the life of a LILF and their very fortunate children… 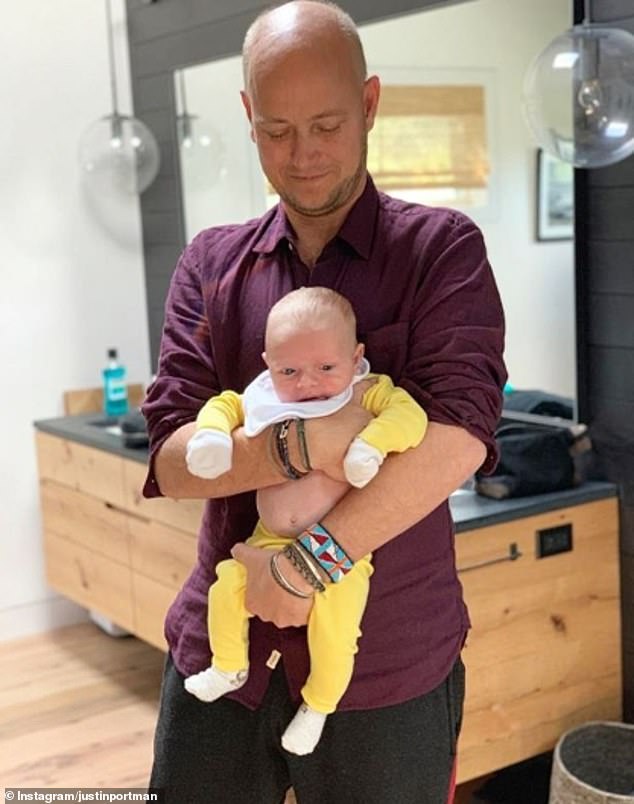 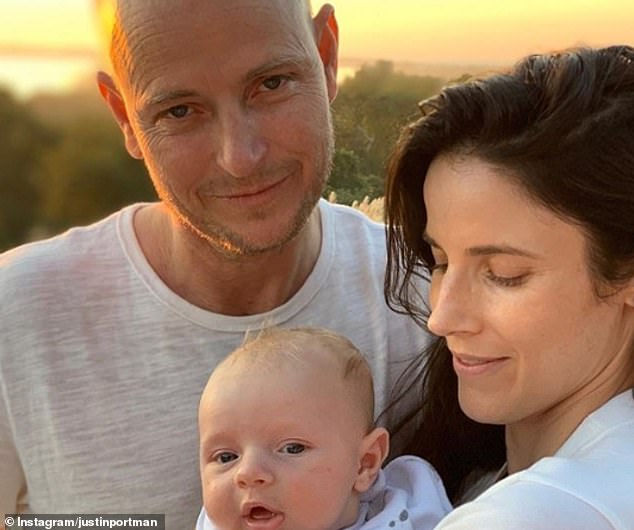 Jet-setter: Little Leo is also frequently photographed and appears in snaps taken on family ski trips and getaways to the sun. Pictured, Justin with wife Morgan and baby Leo 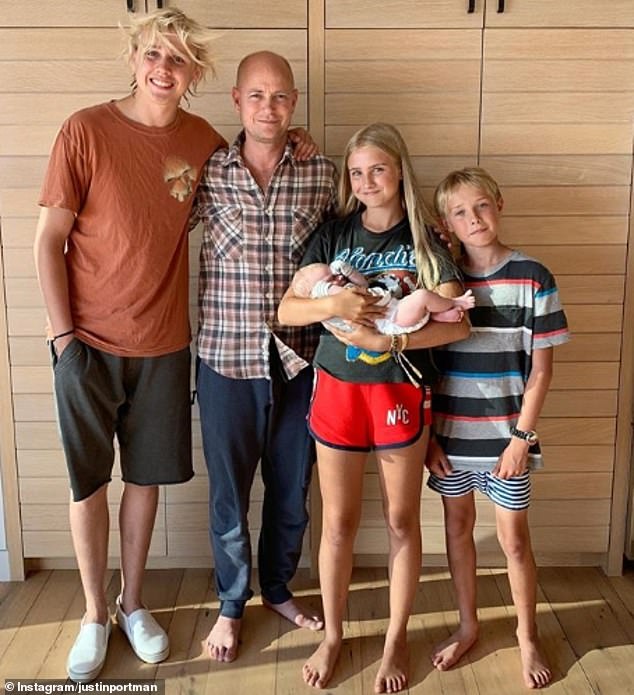 Four times the fun! Justin was previously married to Russian supermodel Natalia Vodianova, 38, and the pair had three children – Lucas, 18, Neva, 14, and Viktor, 12 – together before divorcing in 2011. Pictured, Justin with Lucas, Neva, Viktor and baby Leo in an Instagram snap

Justin was previously married to Russian supermodel Natalia Vodianova, 38, and the pair had three children – Lucas, 18, Neva, 14, and Viktor, 12 – together before divorcing in 2011. Natalia is now with French businessman Antoine Arnault, 42, with whom she has two children.

Proud father Justin maintains a close relationship with his three oldest children and often shares photos of them on his Instagram account.

Little Leo is also frequently photographed and appears in snaps taken on family ski trips and getaways to the sun. 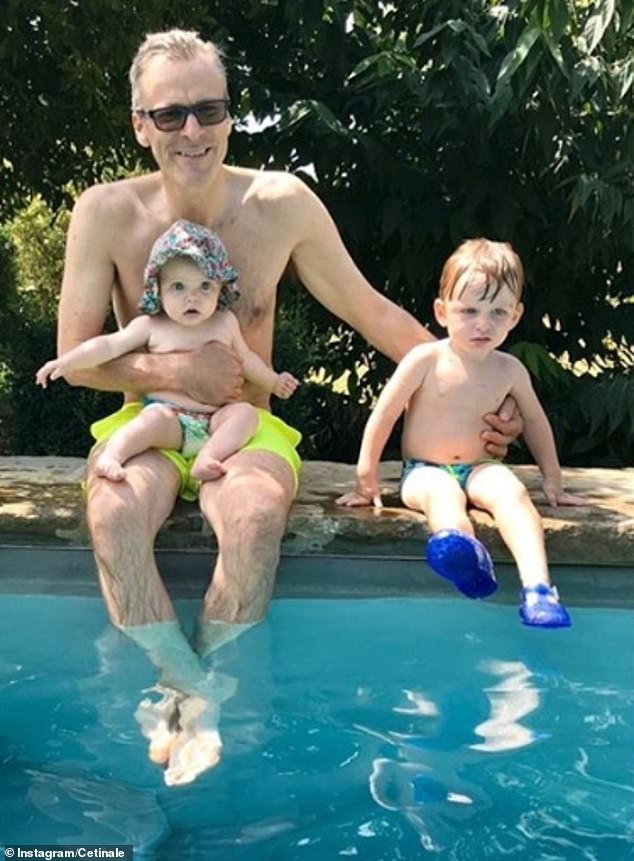 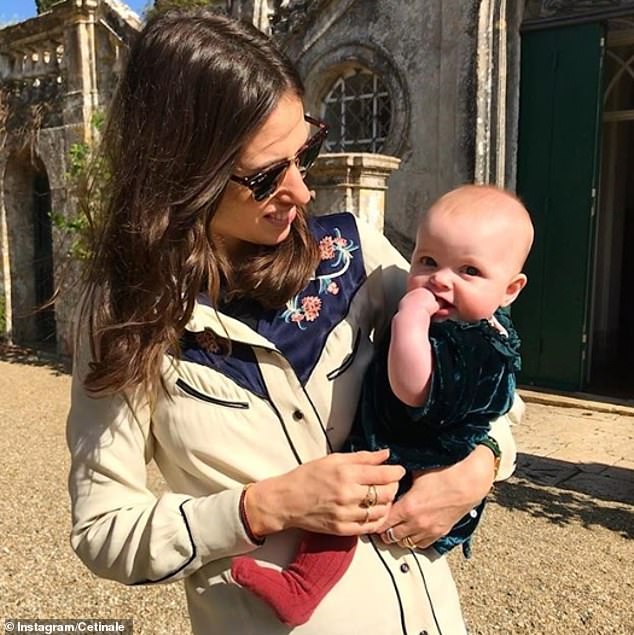 Escape to the sun: Ned’s wife Marina Hanbury with their youngest daughter, Lady Acony, at their Tuscan villa in October 2018. Marina is the sister of Rose, Marchioness of Cholmendeley 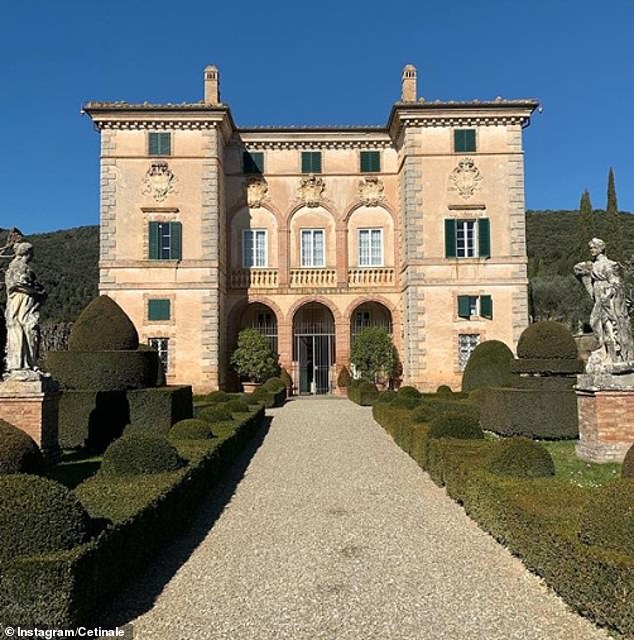 Holiday home: Villa Cetinale, a 17th century home in Tuscany, which Ned inherited on the death of his father, Antony Lambton, the 6th Earl of Durham and a Conservative MP

Country singer Edward Lambton, 7th Earl of Durham, 58, is a father of four and welcomed his three youngest children in his fifties – three decades after his eldest son, Frederick, Viscount Lambton, 35, was born.

The Old Etonian, better known as Ned, shares his young brood – Lady Stella, eight, the Hon Claud, three, and Lady Acony, two – with his third wife, Marina Hanbury, sister of Rose, Marchioness of Hanbury, a friend of the Duchess of Cambridge.

Ned, son of Tory MP Antony Lambton, found himself at the centre of a very public family feud in 2013 when he was sued by his sisters for a share of their late father’s estate, which included a castle and manor house in County Durham, as well as Villa Cetinale, a 17th century home in Tuscany.

Ned’s sisters, Lady Lucinda Lambton, Lady Anne Lambton and Lady Beatrix Nevill, launched a legal action in Italy, disputing Britain’s law of primogeniture. They argued that the estate should be subject to Italian law, in which inheritance is divided equally between siblings. Ned settled the dispute in 2014.

Now Ned, Marina and his young family enjoy holidaying at Cetinale and share photos of their time there on Instagram. 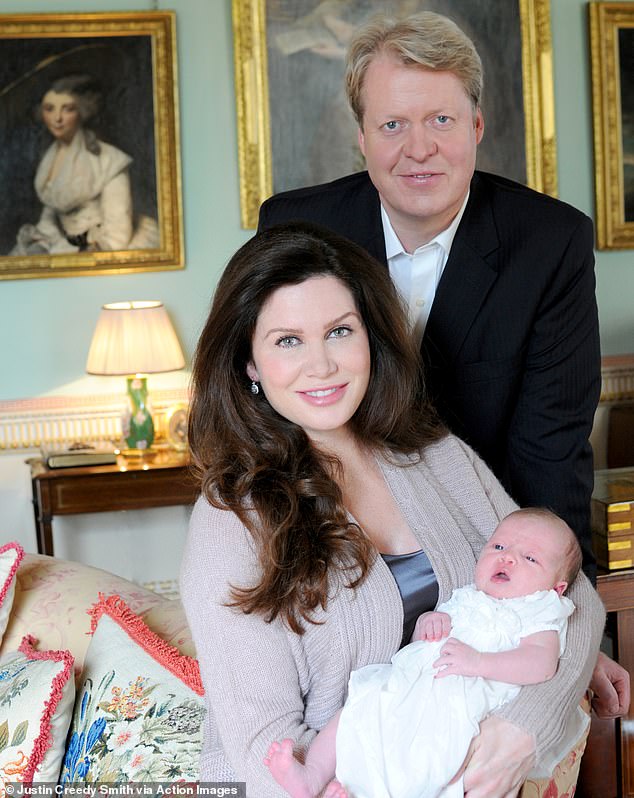 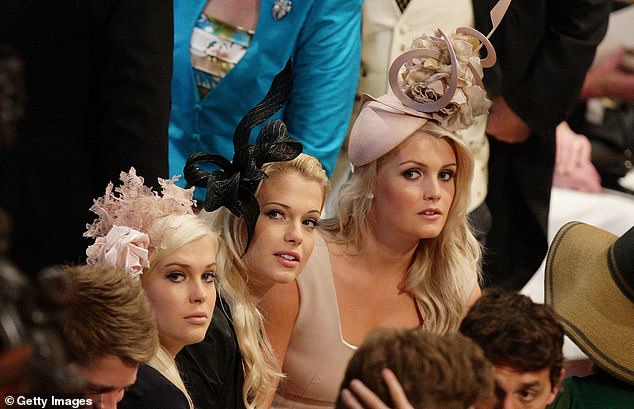 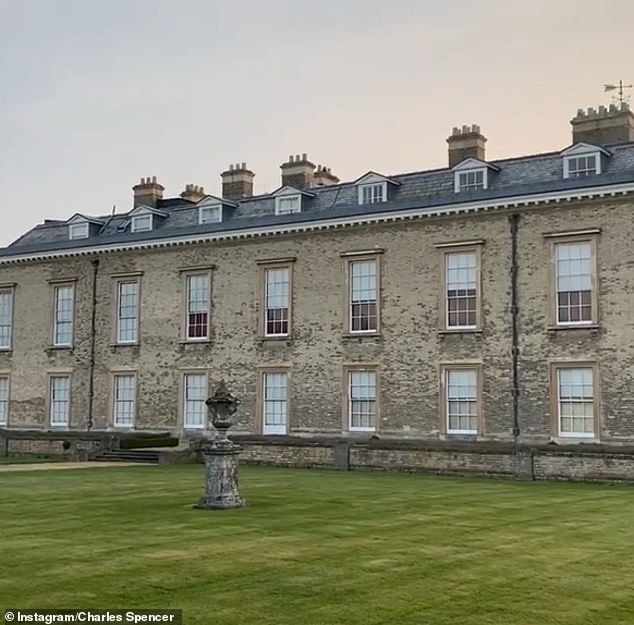 Lockdown: Earl Spencer is happily wiling away the hours at Althorp House, the family seat in Northamptonshire, as seen above in an Instagram snap shared by the aristocrat

Earl Spencer, the younger brother of Princess Diana, is a father of seven.

Earl Spencer shares Lady Charlotte Diana, named after his late sister, with his third wife, Canadian philanthropist Karen Gordon. The family are isolating together at Althorp House – the Spencer family seat in Northamptonshire.

The aristocrat made headlines last year when he revealed he is likely to follow the practice of male primogeniture, a custom in which titles, as well as stately homes, are inherited by the eldest son.

It means Althorp will likely be passed on to drama student Viscount Louis Spencer, 25, rather than to any of his three older daughters. 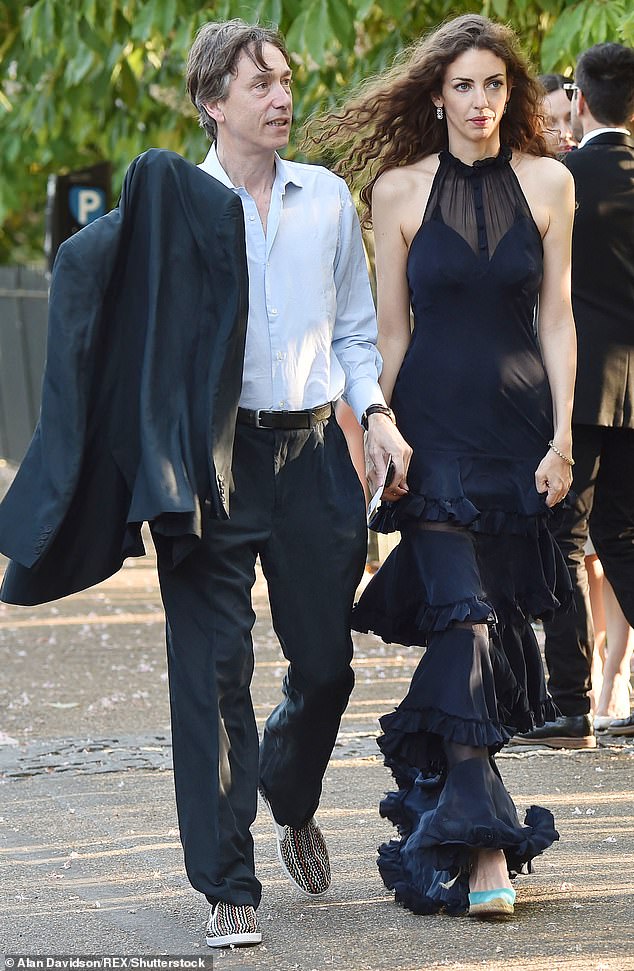 Royal connections: David Cholmondeley, 7th Marquess of Cholmondeley, once described as ‘the greatest catch in Britain’, became a first time father at the age of 49, just months after he wed wife Rose Hanbury, who is 23 years his junior. Pictured, the couple in 2015

David Cholmondeley, 7th Marquess of Cholmondeley, once described as ‘the greatest catch in Britain’, became a first time father at the age of 49, just months after he wed wife Rose Hanbury, who is 23 years his junior.

Former model Rose, who was once represented by the same agency as Kate Moss, was just 25 when she married David, in June 2009, the day after the couple announced their engagement.

Their eldest children, twin boys Alexander and Oliver, were born in December that year. Daughter Lady Iris was born in 2016.

The family live in splendour at Houghton Hall, one of the country’s finest Palladian houses, surrounded by 1,000 acres of parkland. The estate is just three miles away from Anmer Hall, the Norfolk home of the Duke and Duchess of Cambridge where they are currently isolating with children Prince George, six, Princess Charlotte, five, and Prince Louis, two.

Rose joined the Cambridges and other members of the royal family for a church service at Sandringham in January. 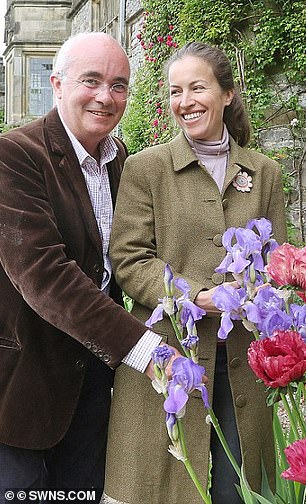 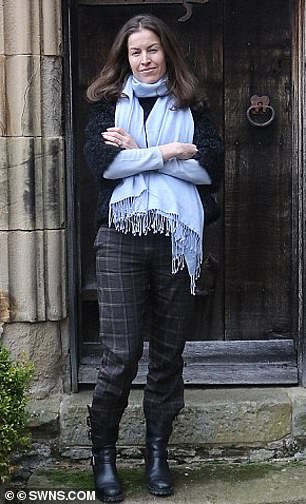 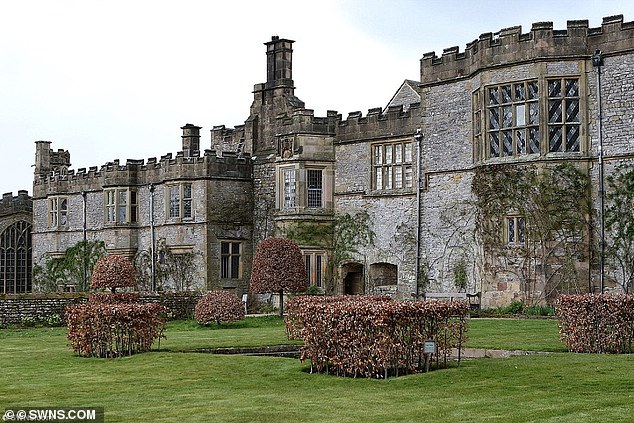 Family estate: Lord Edward lives with his wife, Lady Edward, and sons at the 11th century Haddon Hall, in Derbyshire, which he inherited on his father’s death in 1999

Lord Edward Manners became a first-time father to twin boys, Alfred and Vesey, at the age of 48.

The youngest son of Charles Manners, 10th Duke of Rutland, Lord Edward lives with his wife, Lady Edward, and sons at the 11th century Haddon Hall, in Derbyshire, which he inherited on his father’s death in 1999.

The home has featured featured in several film adaptations of Jane Eyre, as well as Elizabeth, Pride and Prejudice, The Other Boleyn Girl and the Princess Diaries.

Lord Edward has spoken of how his sons bring new life to the ancient property, saying: ‘Hearing the children’s laughter ring through the halls is a very nice sound. It brings a fresh spirit to the place.’