Former editor and Barneys fashion director Marina Larroudé and husband Ricardo set out six months ago to launch what they consider one of the world’s first digitally native luxury shoe brands. From their account, Larroudé the label has already blown through all expectations — and is on track to sell through 30,000 pairs of shoes in its first year, hit $5 million in sales, and is likely to triple to $15 million in sales in its sophomore year.

With a quickly scaling business, the husband-and-wife team — she with the style, marketing, retail and visual experience and he with broad chops in private equity and finance — have just closed on a seed round of funding. While Ricardo declined to reveal financial details, he said that the round is “in the millions,” and that it brings the company’s overall valuation into the double-digit millions zone.

In a short period of time, Larroudé has built a core audience of trend-minded shoppers who want to dabble in luxury shoes with fun details, high quality and comfort but are beholden to a certain budget. The brand’s average shoe hits between $180 and $350. Marina said she envisions the label as being something like Stuart Weitzman for a new generation, and Ricardo hopes it can scale to become a Warby Parker for high-end shoes.

“I think one of the key things you get [with this brand] is myself with 20 years experience in everything fashion from retail to press to wholesale, then Ricardo really has deep knowledge in private equity. When we built the business, we built it for growth to scale,” Marina said of the duo’s strengths, compared with newer labels on the market.

To hear that her own brand will cycle through 30,000 pairs in its first years, she said “shocks me, because at Barneys we had 750 brands for women — it takes you a lot to get one brand to sell that many units; There are so many brands. The ‘Gloria’ style we have, I cannot keep it in stock and I don’t remember having that kind of volume in one shoe except the Comme des Garçons Converse sneaker.” 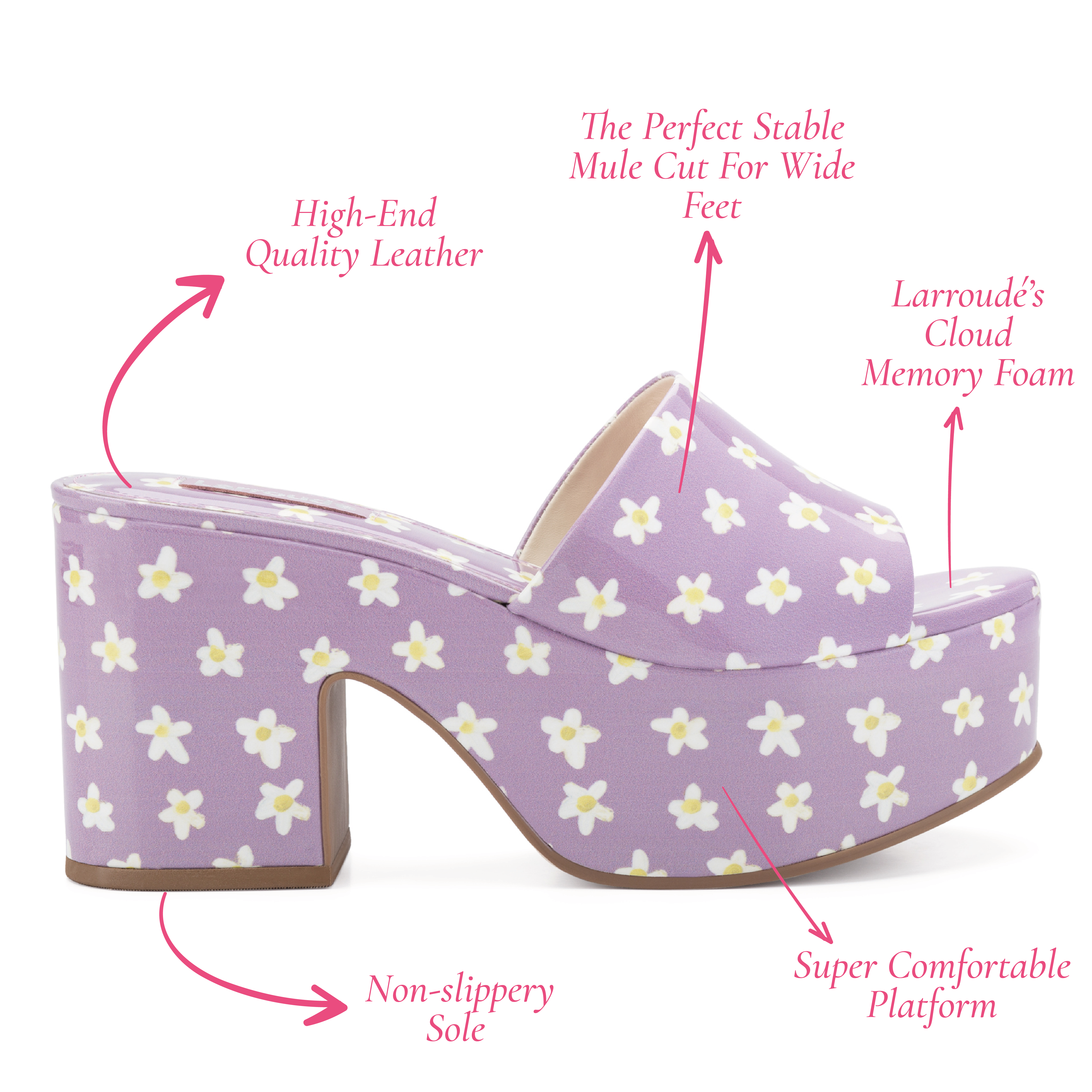 She said she is still unclear about what is in her brand’s secret sauce, other than “various reasons of women coming for a designer look and quality, joyful color or printed pieces that are very unique. I think it’s a perfect match. The customer is looking for something unique and seeing quality and a very good price value. We see in sales and data that when they buy their first pair, they quickly buy another.

“We created this business in a pandemic all via Zoom and working under very stressful circumstances. It’s the norm for us, so I feel like it will be so easy when we can get to a normal way of working,” Marina added.

But in the grand scheme, the Larroudés consider their current numbers just a starting point — with the goal to eventually push between 10,000 and 20,000 pairs into the market each month. They hope to be a high-end option for the masses, with cute, trend-focused footwear that is made and promoted like a high-end product. All of the brand’s shoes are produced in Brazil, where the Larroudés — and many of their new investors — have strong roots. They say that by producing in Brazil, shoe manufacturing costs are 70 percent lower than styles produced in Italy.

“I had a thesis that there was a white space in the market at this price point. I felt like I was underpricing the shoes since they are having this super high quality. I asked [adviser] Martín Escobari — ‘Am I being crazy to price them here?’ and he said, ‘You might have a new value proposition and that might be what enables you to grow your company,’” Ricardo said of the company’s margins.

Marina said that while working as a fashion editor and merchant she would recommend shoes to friends or women who admired her style — often to hear that they were out of their budget. “I love fashion so much, but we are not here saving lives. So if I’m not saving lives, it’s about – ‘How do I turn something important to me into something more women can achieve?’”

Larroudé’s business is a three-prong approach. The company links with key wholesalers including Revolve and Shopbop to grow awareness. When those styles sell out — as they often do — it drives traffic to the brand’s own site, where the label is already seeing a 20 percent repeat customer base (and broad strokes of sold-out product). Printed leather is quickly becoming a brand signature, each released in limited drops, like little daisies or marijuana leaves (the latter released at 4:20 a.m. on April 20), often selling out within a week.

In a strategy to further grow community and repeat purchasing, Ricardo was intent on developing the company’s own affiliate marketing program. He created a proprietary QR code system, in which each pair of shoes comes with a scannable code that can be shared with friends — offering new customers a $20 discount and the original customer a $20 kickback for each referral that can be used toward future purchases. The technology is currently patent-pending.

The same applies to the company’s handbag styles, one of which was recently worn by First Lady Dr. Jill Biden. Handbags will be an important component of Larroudé’s future growth as the company expands its stylistic footprint. 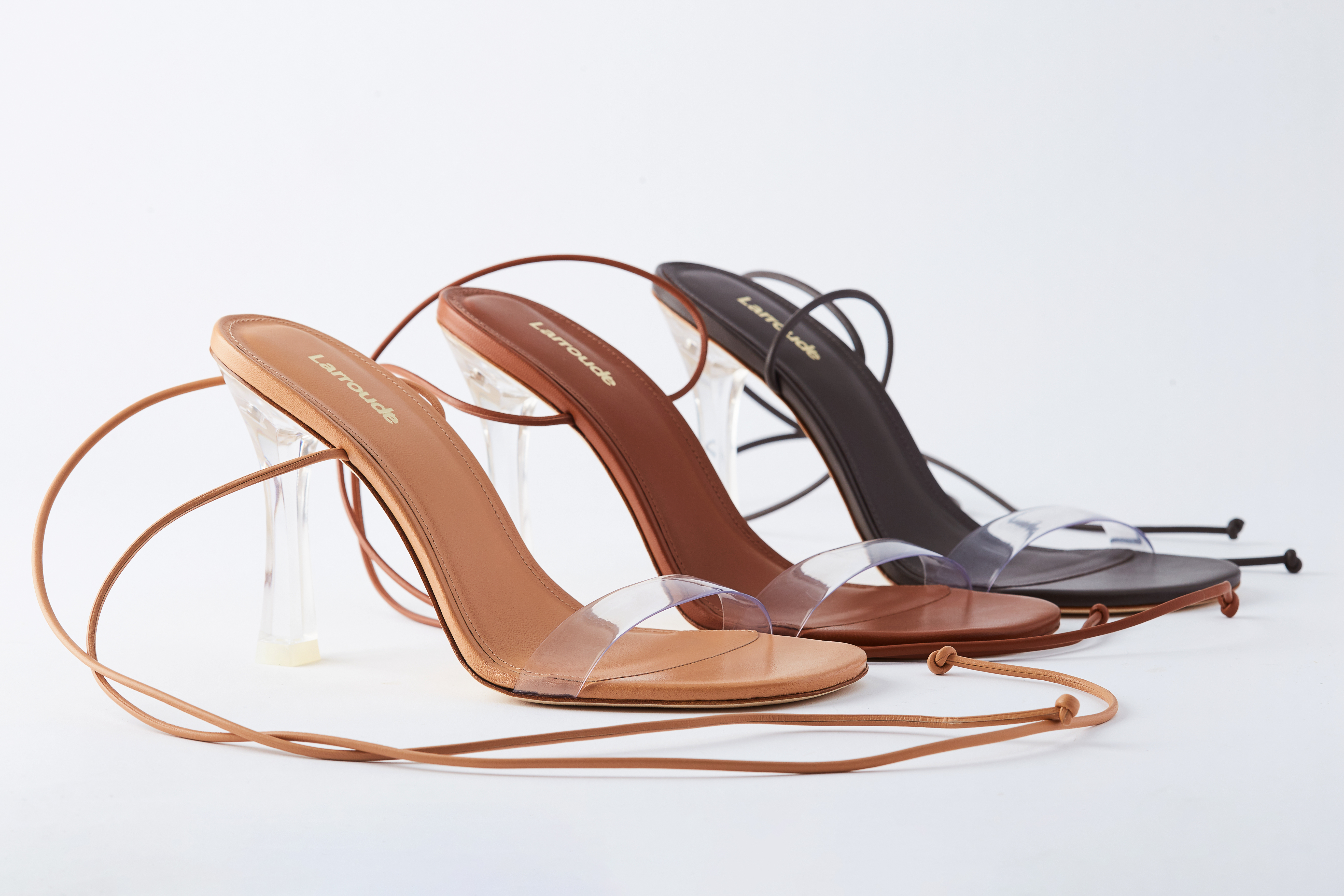 “It’s all about creating a digital connection with the customer and letting them text you back if they have a complaint about delivery or whatever their comments would be. That is the idea, to have that be the main way they know us, rather than a huge expensive billboard in Times Square or seeing a person they know is paid to wear it. We want [the customer] to be part of the story,” Ricardo said.

The last component of the company’s current make-up is a fledging private-label studio. Currently, Larroudé produces and designs shoes for a bigger retailer and a small boutique label — the names of which they declined to reveal. However, these combined efforts already represent one-third of the company’s overall sales volume (but Ricardo said margins are different for this business model and therefore represent a smaller portion of company profit).

“They come to us with a mood board and we turn it into a reality. The shoes magically appear at their warehouse at a margin they can sell,” Ricardo said of the business, which is also based in Brazil and utilizes Larroudé’s same manufacturing partners. Marina added that this structure — with an in-house label and then private-label capabilities — in some ways reminds her of the Camuto Group’s own successful path in business.

With the additional investment, the company will hire new roles and chart its first proper digital marketing plan with outside agencies. Larroudé will also pad its operational budget and improve production lead time. “That’s the one thing we need to build most is the system within our supply chain. By us just stocking heels for our Gloria style, whenever something hits or someone famous uses it — it would mean we get it into the U.S. in four to six weeks. If I have heels in our inventory, I don’t have to wait. We want to be quick to market,” said Ricardo, who noted that the company’s current production lead time is around six to 10 weeks.

At times, however, this can be further stunted due to the ongoing nature of the pandemic in Brazil. “The other day we had to wait [for a shipment] because our factory didn’t have paper to produce the boxes. It’s so interesting to see how the entire production and supply chain works with the global pandemic — each part is key to our business. The shoes could be ready, but if the boxes are not ready, then how do we ship them?” Marina said.

On the heels of its investment, Larroudé signed a partnership with Brazilian behemoth shoe firm Melissa to release two collections — the first drop of which will arrive in November for the resort season. For Marina, who wore Melissa’s signature recycled PVC shoes as a child in Brazil, the tie-up checks a mark on her bucket list. “I didn’t want Barbie’s or dolls as a kid, all I wanted were Melissa shoes and my grandmother used to give them to me now and then,” she said.

Included in the brand’s seed rounds are anchor investors Alexandre Cruz and Guilherme Ferreira, who are the founders of Jive — an alternative investment fund. Cruz also sits on Larroudé’s advisory board, which includes Escobari, the co-president for General Atlantic in Latin America; Matt Barnard, the chief executive officer of San Francisco indoor farming startup Plenty, and Ashleigh Barker, a director at the investment advisory firm Michel Dyens & Co. Also investing and advising is the Bay Area law firm Wilson Sonsini, which works with start-ups like Uber and also represents Larroudé.

But with the rate of current growth, Ricardo is already taking meetings about a Series A round — expected to close in the late fall or early winter. Because, as fashion industry leaders know, rapid growth requires a rapid injection of capital. “We are fully funded for this initial part of growth but we understand that to take the company to the next stages we will need further investment and it will be great to partner with outside firms. To grow, we will need to invest in supply chain and manufacturing, and further enhance our distribution channels,” said Ricardo.