Warning: spoilers galore. Fast & Furious is the loudest, dumbest stop on the backlot tour of Universal Studios in LA. Somewhere between jump-scares from Jaws and Jurassic Park, the tram parks in a vast underground garage where hot babes gyrate in next-to-nothing and big, bald, buff guys wave guns and bark “Let’s go cookie-puss!” and “It’s gonna get ugly fast!”

Then a tonne of cars, petrol tankers and armoured vehicles slam into each other, the road ruptures, the overpass collapses and everything explodes into flames. Honestly, that’s all I needed to know about Universal’s 20-year-long US$8 billion movie franchise. But like a shot of NO2 to my four-core intercoolers, this week’s release of F9 sent me on a marathon 48-hour binge. Here’s what I learned. 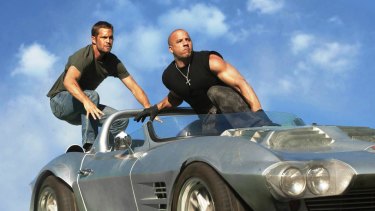 There’s a high-speed truck-harpooning gang on the LA freeways. The cars? Fast ones. How fast? Green and yellow and blue and white and frnyoooooow! Too fast for a blue-eyed tousle-haired boy hero named Brian (Paul Walker). But by heeding tough-guy street wisdom like, “It’s not how you stand by your car, it’s how you race your car,” the kid slips into the gang of big, bald, buff ex-con Dom Toretto (Vin Diesel) and his girl Letty (Michelle Rodriguez).

Dom’s sister Mia (Jordana Brewster) says, “I don’t date my brother’s friends” but yeah right. Turns out Brian is undercover FBI and Dom’s the harpoon honcho but shut up. There’s biffo on the blacktop, a desert drag meet called (I kid you not) Race Wars and a climax with a speeding freight train that leads to mucho macho respect all round. Most gobsmacking line: “You want time, buy the magazine”.

So I’m getting that the F&F homescreen is a street race dance party loaded with gyrating women and guys in singlets saying things like, “Damn Suki, when you gonna pop my clutch?” But wait, there’s a story. Our disgraced FBI friend Brian avoids jail by agreeing to infiltrate a Miami drug cartel that hires people, as luck would have it, by how fast they can drive cars. Fast cars. How fast? Dog, wait til the camera zooms inside the fuel line thingy.

The edits cut sick between pedals, gear-knobs and a little red nitrous oxide flip-button that makes everything go whoooosh like the Millennium Falcon in hyperdrive. Toretto, Letty and Mia sit this one out, but Brian’s comic relief homie Roman (Tyrese Gibson) is plenty big, bald and buffoonish: “Guns, murderers and crooked cops? I was made for this, brah.” Cool gangster torture scene: a rat, an ice-bucket, a blowtorch.

Where did everybody go? Some hayseed dropkick named Sean (Lucas Black) totally hijacks the franchise with a demographic readjustment for highschool piston-heads. By some handy quirk of the Arizona juvenile justice code, he avoids jail by agreeing to move to Tokyo. Sweet. A few nitrous oxide whooosh shots and several car races loaded with gyrating Japanese girls in mini-skirts bring the continuity. A street-smooth mentor named Han (Sung Kang) teaches Hayseed how to “drift”, a sideways slide that looks truly majestic down Japanese mountains but is really just a far-eastern way to smash a tonne of cars. Fast cars. You want furious with that? Check out the Yakuza boss’s nephew when the Gaijin kid drifts off with his best girl, sparking the turbo-boosted metaphor, “You didn’t just play with fire, you soaked the matches in gasoline!”

These people waste a ridiculous amount of time saying “Let’s do this” and “You got this” but the truck-jackers from the first movie have somehow managed to spectacularly upscale operations in the Dominican Republic. Sadly, Letty rolls her very fast car and gets killed. Er, doesn’t she? Brian’s back in a suit with the Feds, but a Mexican drug king recruiting for fast car drivers (what else?) brings him and Toretto back together, jostling for lines as awesome as, “What are you looking at, nutsack?“/ “I don’t know, you tell me”. Boom!

The stunts are even more incredible: leaping out of a vehicle rolling end-to-end in a disintegrating fireball and landing on the bonnet of another one is standard play for Toretto. Letty’s death leads him on a suicidal revenge race through some mineshaft under a Mexican mountain range. Buff bald guy wisdom: “A real driver knows exactly what’s in his car”. It’s clearly not a long-sleeved shirt. 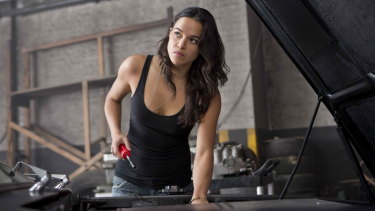 Michelle Rodriguez’s Letty is killed in a fiery explosion early in the franchise. Or is she? Credit:Giles Keyte

There comes a time in every casually homicidal motorist’s career where he has to secure a safe future for his loved ones. The family metaphor cranks up in this one: a sideways drift into the heist genre with all the cliches, from getting-the-team-together montage to the $100 million payday – after the vault gets dragged down city streets at high speed for 20 minutes, surely killing thousands.

The usual bus-rolling and train-jacking insanity is here, but the guns and gadgets outweigh the smoking tyres. The dialogue takes a classier turn too. Like when comic relief guy Roman says, “Sexy legs, baby girl. What time do they open?” and she says, “They open at the same time I pull this trigger”. Boom? DSS agent Luke Hobbs (Dwayne Johnson) almost steals the show but he’s not our daddy. “Life is a race,” Toretto teaches us. “If you don’t run fast, you’ll get trampled.”

The dead never die. That guy Han from Tokyo? He’s been back at the wheel for a while; now turns out Toretto’s girl Letty only bumped her head two movies ago. She’s fast-driving for some bad dude so he has to get the team back together to save her. Big bald DSS guy Hobbs grants them all amnesty to infiltrate the blah blah oh God, here we go again. The stunts are truly ludicrous now: tanks on freeways and cars leaping out of Russian cargo planes, but deftly relocating to London, at least the writers are up front about it: “This is crazy,” Roman astutely surmises, “so we got cars flyin’ in the air on some 007-type shit?” The stakes are higher now that Brian and Mia have a baby back home, so more innocent bystanders must perish in their monumental traffic accidents. “Ride or die,” Toretto says. Conveniently, his team can do both and still turn up for work.

My brain is mush. The movies are longer, the stunts more absurd, the team bigger and now some grand cockamamie master plot ties credulity in knots with flashbacks to Tokyo explaining why Han never died. The global espionage transition is sealed with the arrival of British uber-thug Deckard (Jason Statham) and all-knowing black ops guy Mr Nobody (Kurt Russell).

A hot English hacker named Ramsey (Nathalie Emmanuel) joins the team because she looks great in a bikini and also invented some global surveillance gizmo called God’s Eye but never mind any of that. The epic soft-porn Abu Dhabi action thrills are derailed by the real-life death of number two guy Paul Walker in — sad irony – a speeding car accident in LA. Life, art and Toretto’s painfully laboured “family” metaphor make for a surreal final sequence. “One last ride,” he croaks. Yeah sure.

Toretto goes rogue? God’s Eye blinks? Mr Nobody gets a mini-me? Please, make it stop! The plots and stunts are so ludicrous now that half the team is playing for laughs, led by comic-relief Roman and tech-babble dude Tej (Ludacris), while big bald Dwayne masters the knowing wink with lines like “What boy band bus did you fall off of?” 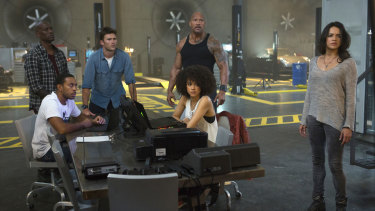 Some of the cast of The Fate of the Furious: Chris “Ludacris” Bridges, seated left, and Nathalie Emmanuel, seated right, and Tyrese Gibson, standing from left, Scott Eastwood, Dwayne Johnson and Michelle Rodriguez.Credit:AP

But the formula is too big to fail now and even Charlize Theron knows it: her soft-talking cyber-terrorist Cypher ups the game with a nuke-jacking plot from some ’80s Bond movie culminating in a truly epic, ice-busting Russian submarine climax. With cars. Really, really, fast cars. The babies are multiplying in a slightly cloying way but like Toretto says, “You never turn your back on family”. We know, Dom, we know.

Launch day 10.45am and my local cinema is already (COVID) full. If you’re looking for gyrating women you’ll be disappointed because at long last, as Hetty pointedly tells Mia, “the world’s grown”.

Dwayne’s taken a rain check but everyone still breathing IRL — even Hayseed Sean from Tokyo — is back, flying cars across jungle ravines and destroying half a dozen cities and battling Cypher’s next cunning move to rule the world with “a weapon so dangerous it shouldn’t even exist for another half century”.

The thread is Toretto’s origin story, so prepare to flashback to speedway racing circa ’89, learn why a ’70s Charger is just like a family, and then forward to the first car in outer space. It’s a really, really fast car, of course, but know this: “No matter how fast you are, no one outruns their past”.

Find out the next TV, streaming series and movies to add to your must-sees. Get The Watchlist delivered every Thursday.