Dust off your platform shoes and get ready to zig-ah-zig-ah, because the Spice Girls are celebrating 25 years since releasing their debut single, Wannabe.

Victoria Beckham, Geri Halliwell, Mel Brown, Mel Chisholm and Emma Bunton will mark the anniversary with a previously unreleased Wannabe25 EP that will be available to buy and stream from July 9. 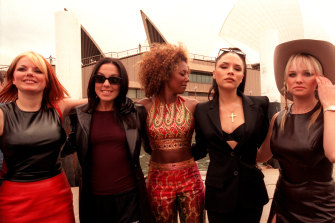 The Spice Girls arrive at the Sydney Opera House as part of their tour for Spiceworld.Credit:Fairfax Photography

When they first arrived on the scene in 1996, the Spice Girls were dragged by media for being “overwhelmingly ordinary” and “imaginatively groomed check-out chicks” who were “commoditising feminism” – and they’re just the hot takes from The Sydney Morning Herald. In 1998, then-prime minister John Howard refused to meet the girls, saying it would be inappropriate.

Almost a decade later, Victoria Beckham was described in an article in 2004 as having had “a kind of naivety that was par for the course” after she declared: “If I wear a short skirt, it is because I want to wear it … it’s not because I want to appeal to anyone else.”

Despite the ire they caused the press, the Spice Girls’ 1996 debut album, Spice, became the best-selling album of all time by a female group, with more than 31 million copies bought worldwide after its initial release.

It was estimated at the time that the Spice Girls earned an estimated $US47 million ($72.3 million) from the release of Spice (and related merchandise). Far from the regular merch and CD deals, the girl group also released Spice Girls drinks, potato chips, ice creams, biscuits, deodorants, cameras and a clothing line.

In Australia, Wannabe debuted at No. 45 on the ARIA charts in September 1996. By October 28, it had reached No.1, and it stayed there for 11 weeks straight before spending another five weeks in the top 10. 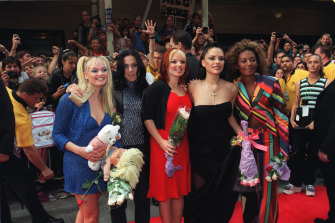 The Spice Girls in Sydney in 1998. Credit:Fairfax Photographic

Even todayWannabe is still the seventh best-selling debut single of all time, with more than 1.3 million CD singles and download sales, and it remains the longest reigning No.1 by a girl group.

Their legacy is also long. The Spice Girls have inspired the careers of countless Australian singers, such as Troye Sivan, Delta Goodrem, Josef Salvat and Dani Im, the last of whom said “the Spice Girls was my first introduction to pop music and the first album I bought”.

Although the Spice Girls haven’t released a new song or visited Australia in nearly 20 years, Melbourne-based tribute band Spice Power is regularly booked to perform at events across the country. 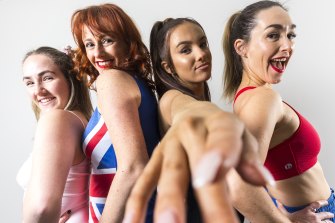 While it’s been difficult for Spice Power during the pandemic, Bloom says demand for them to perform surges whenever restrictions allow.

“There’s a real nostalgia happening at the moment,” she says. “People are looking back to happier times with their favourite bands, so we’re finding ourselves booked regularly.”

Samantha Grace, who performs as Sporty Spice, was initially surprised at the success of the tribute group but says the Spice Girls would always be popular because they were more than just a band. “They’re a reminder of the power within yourself and the real strength of female friendships in the face of dismissive authority,” Grace says.