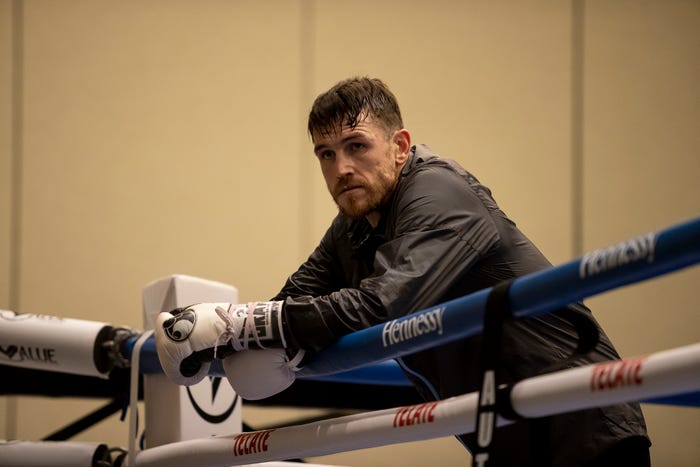 Callum Smith didn't fight for an entire year because he was waiting for one specific phone call.

It's not how he wanted to spend 2020. Fighters fight, and Smith — the WBA super middleweight world champion — is no different.

Smith is at his happiest when he's got a fight date booked and an opponent to train for. It's what gets him out of his warm bed and into the cold as he goes for an early run on Liverpool's rain-soaked streets.

Combat negotiations take their toll on Smith, who was training unhappily as he had no fight date booked and no contracted opponent for most of the year. It left him low on motivation, wondering to himself why he was bothering.

Even Smith's wife, Kimberly, noticed a difference in her man. She asked him why he constantly had his nose in his phone and why he was so miserable.

Smith is one of Britain's best boxers, a World Boxing Super Series champion, and the No.1 fighter in the 168-pound weight class.

Throughout the year, there were negotiations behind-the-scenes for a mega-match involving the sport's biggest attraction — Saul 'Canelo' Alvarez.

It could have happened around the Mexican holiday Cinco de Mayo, which is one of boxing's most lucrative fight dates, but the coronavirus pandemic had shuttered sports — there was to be no boxing at that time.

Then there were rumors Alvarez may not fight in 2020 after disagreements with his then-representatives Golden Boy Promotions and his broadcaster, DAZN. There was a multi-million dollar lawsuit, and a district courtroom was involved.

So when Smith's phone finally buzzed a few months ago at 10 p.m. to ask if he would agree to terms for a deal to fight Alvarez on December 19, he was so drained from the process he told Insider that he could hardly smile.

"I was knackered, and it got to the point where it was like, just do it or leave me alone," Smith said.

It was night-time, and he was lying in bed next to Kim. She told him the bout agreement was here and that he should feel happy to train with a purpose once again.

But Smith was tired and agitated because he couldn't sleep. Then his phone buzzed once more. It was his promoter Eddie Hearn, the group managing director of Matchroom Sport.

Hearn had sent Smith the fight poster — Smith's name was right beside Canelo's. It was a Matchroom-promoted event, broadcast on DAZN, and heading to Texas. The fight was actually happening.

And so Smith, one of four famous boxing brothers, sent messages to his siblings and his father to say the Alvarez fight was here.

Replies came flooding back from his family.

Canelo vs. Smith is one of boxing's biggest bouts

Smith told us it was a lot easier to get up and train the next morning for a fight against Alvarez, rather than getting up and training while there was ambiguity over whether he'd fight Alvarez, someone else, or nobody at all.

"It's exciting as it's what all us fighters want," Smith said. "We speak about the journey … you have four-round fights at the start of your career, then six-rounders, and so on as you build yourself up, and you obviously enjoy that at the time, but for every fighter, that's not the dream. The dream is to get to the very top.

"You've got to do that to get to where you are. And now I'm finally here, to be in the biggest fights I've always dreamed about being in is nice, but I don't just want to be involved in the fight — I want to win it. That's where my heart is.

"In camp, it's tough, but these are the fights I've dreamed about being involved in. It's easier to get out of bed and do a tough session when you know what it's for, and this is the biggest fight possible against Canelo.

"The thought of not being at my best and losing is what motivates me and makes me get out of bed when I don't feel like it, to do the tough sessions, and make sure I am at my best. And I believe that my best does win this fight."

Callum told us Liam was devastated after the loss. But added that as the years went on, the defeat has looked better because of all that Alvarez has gone on to achieve.

It has also provided Callum with insider intel on what it's actually like to fight Alvarez. It's one thing studying footage of how he moves, plants his feet, and throws his shots, but it's something entirely different to be the one defending those blows.

"But to get at the world-level … everyone can punch a bit, everyone can take a shot, and everyone is strong. Everyone's got a bit of speed. But it's your brain which wins you the fights at the highest levels, and he's a very intelligent fighter.

"Liam said he finds gaps which you don't really know you're leaving, and he's very accurate.

"But Liam also said he believes my physical attributes can beat him. So he's always wanted me to get this fight. He's always believed I'd be the winner.

"I think he's more pleased than anyone that I did get the fight and the chance to prove what he said — that if anyone can beat him, it's me."

Smith is used to the big events

Though the Alvarez match in San Antonio is the biggest fight of Smith's life, it is not his first rodeo on the grandest of stages.

He has been here before — boxing in far-flung places, away from home comforts, and with championships on the line.

Victory tees up bigger fights, turns him into more of a household name, and brings in more revenue down the line.

Defeat puts him back a year or two.

Smith knows all about high-stakes bouts and has fond memories of his last — the World Boxing Super Series final at the King Abdullah Sports City in Jeddah, Saudi Arabia.

It was a match that had two major championships on the line and the Muhammad Ali trophy.

Smith exploded into action in the seventh round, bloodying Groves with a brutal body-shot and right-hand uppercut. They were punches that ended Groves' reign as champion and ushered in the Smith era from 2018 to the present day.

"But to win the world title was something I wanted to do since I was a little boy, and to beat the No.1 in the division when I was the betting underdog was great.

"I'd finally done it, chased it for so long, and worked so hard. I'd won the British title, but I was never satisfied. I'd always wanted the world."

Smith remembers the mood in the locker room well. There wasn't as great a fan atmosphere as if he'd been boxing in Liverpool's M&S Bank Arena, but when he was sat backstage with those who mattered the most to him — his brothers, his team, and Eddie Hearn — they "all got high on life" because of the result.

"Even speaking about it now brings back fond memories and makes me appreciate how much I've enjoyed boxing over the years," he told us.

He then reflected on the sacrifices he made over the years. There's no going out and getting wasted on whatever substance you crave most, there are no night-club visits, and there are no late nights when you live the life of an athlete.

"I missed out by not going out with my friends and heading into training camps instead," he said. "But it was all worth it.

"If I'd have retired without fighting and beating Groves, I'd have felt I'd underachieved. So to do that was a big weight off my shoulders. But it also made me set new goals and want more again.

"As a fighter, an athlete, you always want more. You're greedy. You want that bit extra.

"So though I won the world title, it didn't satisfy me as I had new goals and wanted to achieve even more. Maybe be a two-weight world champion. Maybe beat Canelo … hopefully, that will satisfy me."

Alvarez is not invincible, Smith says

Alvarez arguably owns the best resume out of all active boxers today.

The 30-year-old has only ever lost to Floyd Mayweather but has wins over Shane Mosley, Miguel Cotto, Gennadiy Golovkin, Daniel Jacobs, and Sergey Kovalev.

He's got a record of 53 wins (36 knockouts) against one loss and two draws, is Insider's No.1 boxer on the planet, and could remain a pound-for-pound mainstay for another five years.

But he's not invincible, Smith told us.

"I think if you look into his results, they're great, but some people had him losing the Kovalev fight [before the knockout].

"If Kovalev wasn't 37, would he have faded the way he did? With the Jacobs fight, Canelo lost a lot of rounds. And the GGG fights were close, too. So he's not invincible.

In the coronavirus-era, Smith, as he found in Jeddah, will not have the raucous support he enjoys when he's fighting in front of his hometown fans in Liverpool, England.

But, like always, he has something he values even more.

"I'm the fighter I am today because of my brothers. The fight of my life isn't just for me. This is a big occasion for the family."

Against Alvarez, the occasions in boxing do not come any bigger.