There are no rules any more with COVID-19. Whatever it takes, no measure is too extreme. Policies that were unthinkable weeks ago are now regarded as essential: shutting down sport, restaurants, pokies and casinos (hooray, I hear many say), suspending the rights of landlords over their own properties. Anything seems possible: states shutting their borders, despite the constitution saying the opposite; even the embracing of massive government deficits – federal and state – are suddenly unremarkable. 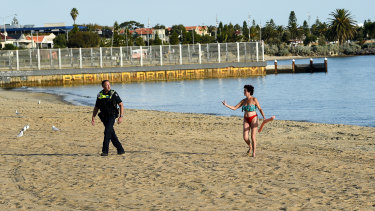 For politicians of a conservative orientation, this is undoing a lifetime of conviction politics. Chasing the unicorn of a budget surplus, a pathological dread of deficits, a deep distrust of big government – all have been conservative orthodoxy. Until now. Not any more, and not for a while into the future.

There has been a vigorous debate in the national cabinet and sections of the business community: is the cure worse than the disease? Those arguing for milder measures are hoping – and that is all they can do – that the worst-case scenario never materialises. But surely, if in doubt (and there is little doubt, though you can summon some if you really try), you give the benefit of the doubt to humanity and health rather than cutting corners to protect pockets of economic self-interest.

As of midnight Saturday, overseas arrivals will be compelled into 14 days' quarantine under guard in hotels. Hooray, and at last! I returned to Australia just as the 14 days' "self-isolation" rules were announced. I assumed I would be required to stop in Brisbane – my arrival airport – for 14 days. I was unable to find any advice on any government or other website about internal transit. So I checked with Greg Hunt, the federal Health Minister, personally texting him to ask if transit was permitted. It was. (He also acknowledged the oversight and committed to rectifying the information gap.)

But why was I allowed to transit? I wandered unchecked through duty free and customs, walked across the airport to share the shuttle bus to the domestic terminal, made my way through Qantas check-in, the usual preflight security screening, the cafe, newsagents and a crowded departure lounge before boarding my flight to Melbourne. Then, and only then, was I required to enter self-isolation. It makes little sense, and is another of the many inconsistencies that have muddled the messaging from the Commonwealth.

Prime Minister Scott Morrison wins first prize for confusion with the hairdresser rules, the incantation that “all jobs are essential” just moments after announcing a whole lot were not, and inappropriate smiling while delivering news that destroys many people's livelihoods.

Premier Daniel Andrews, on the other extreme, has shown clarity, an absence of waffle and consistency of message. His previous incarnation as health minister in the Bracks/Brumby years has served him well. It familiarised him with the lingo and jargon of the health system, a trust of doctors, and a preparedness to question their advice. He has deep networks within the state's hospital system and knows who to listen to and who to regard with appropriate scepticism.

And make no mistake, there is much to be sceptical about. On both extremes of the projections, there are some heroic assumptions. At the risk of being called a heretic, there are some claims made about COVID-19 that history will judge harshly.

Telling people they may die is not getting through to everyone. Instead we should tell them that the longer they do not comply, the longer they will be out of work. Millions can relate to job losses – not many relate to the prospect of death.

And then there is the rash and foolish belittling of the virus by some media figures (the usual suspects, you know who they are …) and self-interested business types, most of whom have regretted and recanted their earlier prognostications. Those who thought COVID-19 little more than a bad case of the flu will hopefully learn from their arrogant certitude and in future be more humble and cautious with stuff they do not understand. Or maybe not.

At the other end, the tendency for some to catastrophise is not helping either. The more extreme projections suggesting an existential threat to humanity are just as unwelcome.

Soaring unemployment – much of it hopefully temporary, but devastating nonetheless – hits hardest those many families who live from pay to pay. Many small businesses, struggling even before the virus, will never recover. The domino effect right through the economy will take years to resolve.

But when the health crisis is under control – not "over", but under control – the Australian economy and Victoria in particular will come back with a roar. Bottled-up demand will explode, creating new but welcome problems of capacity constraint and supply bottlenecks.

The state government would be well advised to convene a consultative group as Scott Morrison has done, to ensure the smooth transition back to something resembling what we enjoyed before. Unprecedented co-operation between business and unions will be needed to smooth the transition, and all three levels of government will need to put turf wars aside as they are supposed to do with bushfire recovery. 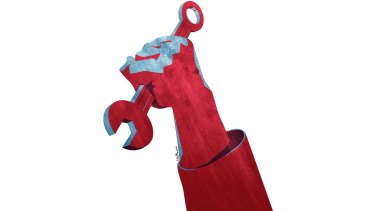 The greatest asset available is billions of our own money, tied up in superannuation, which now needs to be productively and carefully unleashed. It is “patient capital”, invested to supply retirement incomes for decades into the future. There is so much capacity in superannuation that we have been exporting capital in search of returns. As long as we overcome the short-term liquidity pressures and look to superannuation funds as partners and investors in the recovery, we can secure immediate and future needs simultaneously.

We urgently need to explore tax incentives and concessions for super that ensure Australian workers get the benefit of Australian capital to rebuild Australian jobs and businesses.

The basic settings for 2019 have vanished in 2020. Globalisation is now seen as a trigger for dependency and instability, not a force for economic growth and prosperity. Faith in the power of “the market” to fix all of our problems has collapsed – no one is saying “let the market fix coronavirus”. Big government is back. Taxpayer bailouts of business are not just possible but probable. Decades of mothballing manufacturing will be reversed as the economic scar tissue of COVID-19 sets in.

As we enter the crucial few weeks to come, as the curve flattens or fattens, thoughts are already turning to the economic rebuild. Overseas travel clearly will take a long time to resume, but Australians will still want holidays. Local tourist spots will boom. Will we see people hoarding tent pegs and rushing to buy sleeping bags like they did toilet paper? No, but there will be heavy demand … and jobs.

Likewise, backyard veggie patches are no longer an ethnic legacy or a trendy indulgence but common sense. Backyard chooks cannot be bought for love or money, and we have seen more cakes baked at home in the past fortnight than for years. What greater incentive could there be, too, to give up smoking?

As the nation demands to be more self-reliant, the manufacturing heartland of Victoria will step up. A differently skilled workforce will be needed. The construction binge that has been the hallmark of the Andrews premiership will need to be on song to provide the essential infrastructure. No one is worried about PFAS right now, but the issue has not gone away.

The Andrews government as always will keep an eye on the political future. Judgment will come at the ballot box, but for now politics is put aside. Even the ALP's internal fratricide has been suspended. Opposition has never been more irrelevant, and their only role will be to make constructive suggestions and pass on good ideas. Any attempt by hardline Liberals to play politics will be harshly judged.

Jon Faine is a former presenter on ABC 774.