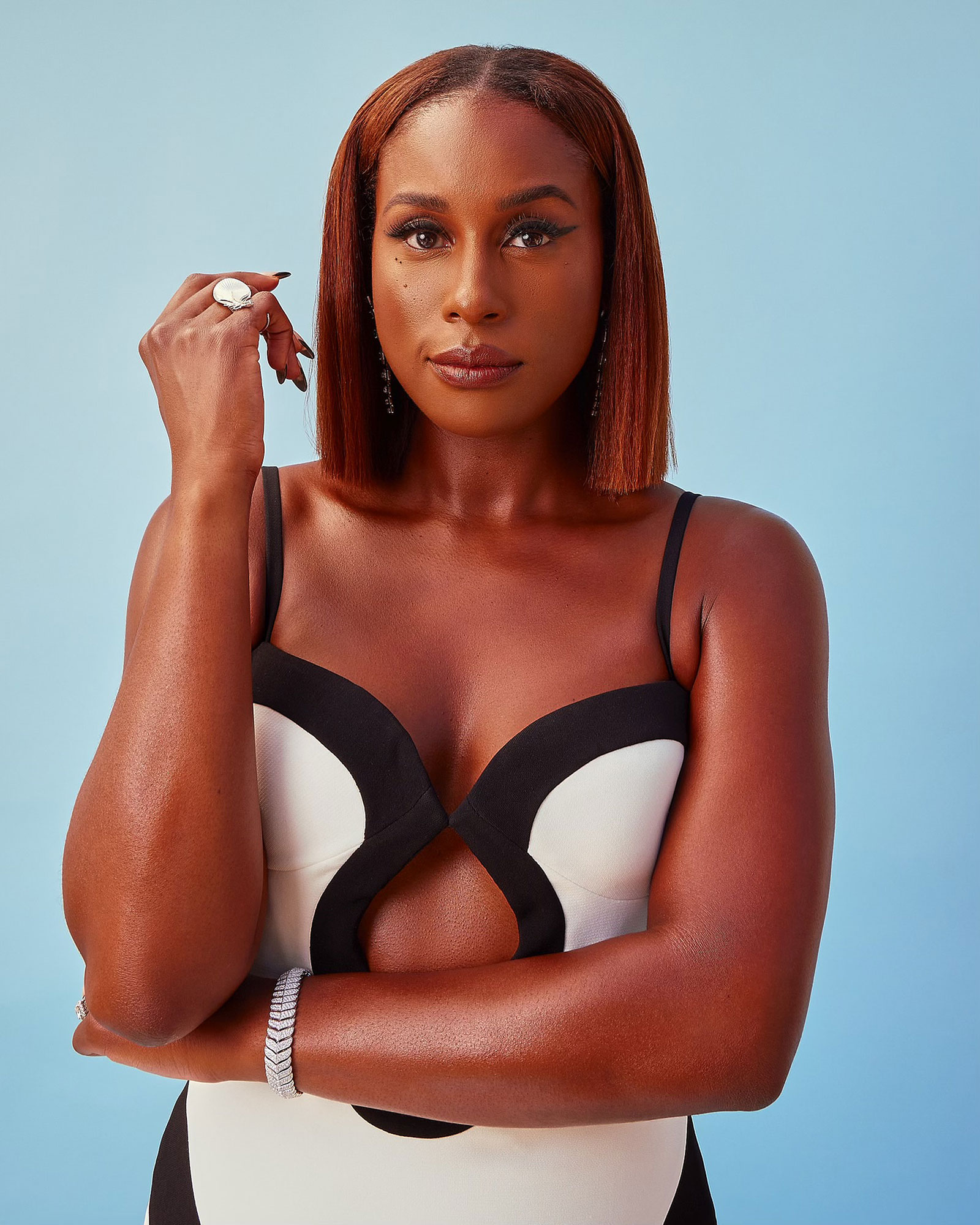 Issa Rae‘s 2022 Emmys look was one for the books. The actress turned heads at the ceremony as she celebrated her hit HBO series, Insecure, which scored three nominations for its final season.

The Best Beauty Looks at the 2022 Emmy Awards: Photos

The California native, 37, arrived at the Microsoft Theater in Los Angeles on Monday, September 12, wearing a custom black and white Sergio Hudson gown. The figure-hugging frock highlighted her curves and featured a sexy cutout at the bodice. While the comedian’s outfit will be remembered forever, it was her glam, however, that stood out to Us.

The Little star looked like a golden dream thanks to her makeup artist, Joanna Simkin. Her beat featured a stunning highlight and a dramatic winged liner. “I was inspired both by the geometric pattern of her dress and by the fact that she is nominated for her final Insecure season,” Simkin told Us Weekly exclusively. “I wanted her to look timeless [but didn’t want] the look to compete with the dress — but rather enhance how strong and powerful she looks and is.”

To do this, the beauty guru prepped Rae’s skin with Lancer’s Legacy Eye Treatment, to make sure “Issa’s eyes were wide awake for the red carpet.” Simkin then hydrated the producer’s face with Lancer’s Legacy Youth Treatment, which retails for a whopping $1,000. The moisturizing didn’t stop there, Simkin also applied Lancer’s Omega Hydrating Oil all over Rae’s body.

Next, the painting began. Using all e.l.f. Cosmetics products, Simkin started with the brand’s C-Bright Putty Primer. “I always love Vitamin C-infused primers and this one really enhanced Issa’s glow while gripping her makeup for all-night wear,” she explained, adding: “Primer is key for award shows.” 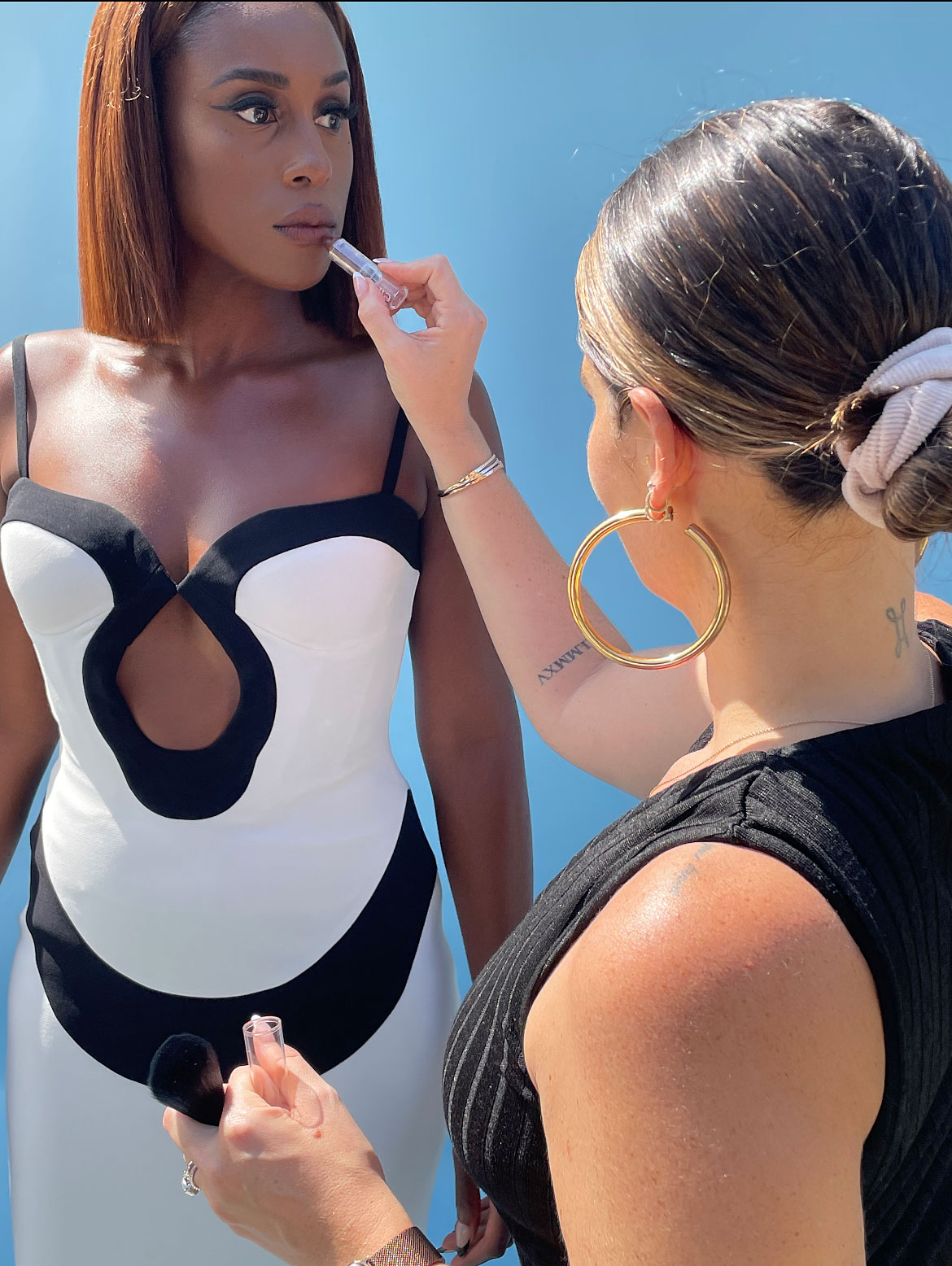 Afterward, the glam expert went in with e.l.f.’s new Halo Glow Liquid Filter, which launched this year and went viral on TikTok, in shade 8 rich. The product provides a shimmery but subtle shine that can be captured on camera. Simkin then used the line’s Bite-Size Eyeshadow in Truffles, which comes with a budget-friendly $3 price tag. “The two neutral shades contoured Issa’s eyes, while the smooth black created a beautiful smokey and defined wing.”

As for how fans can recreate Rae’s look at home, Simkin said: “Make sure to damp your sponge before applying foundation.” She explained that the sponge will help so you don’t “soak up too much product and the moisture will allow the sponge to bounce on the skin and create a seamless finish.”

Simkin added that when working with the Lovebirds star, she aims to enhance her natural beauty. “Her glow is my number one priority and using products that enhance her beautiful skin tone and radiance will always be the first thing I think through instead of color matching,” she shared. 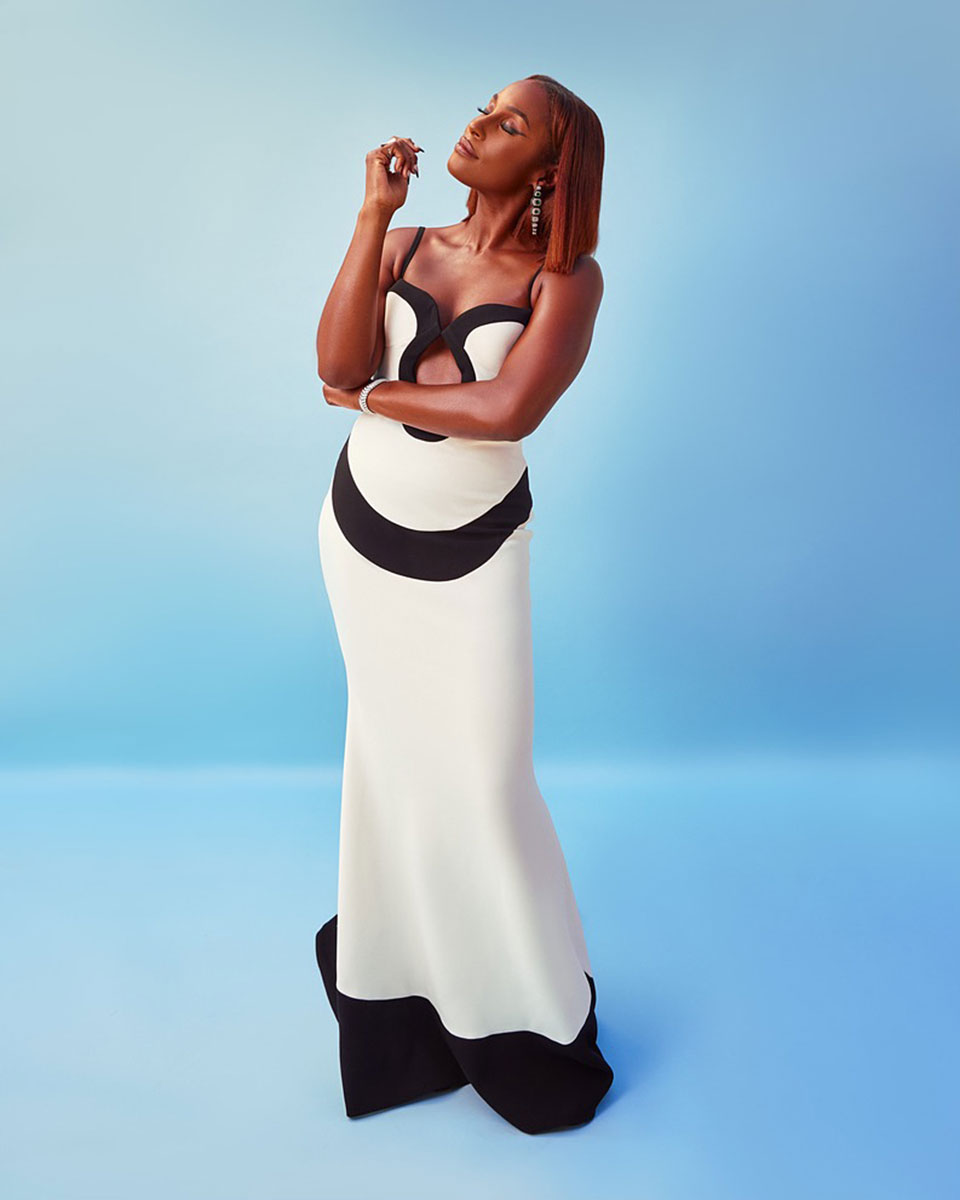 Rae’s look was finalized with a bone-straight blunt bob that was brought to life by celebrity hairstylist Felicia Leatherwood.

The show first premiered in 2016 and ran for five seasons before ending in 2021. The HBO comedy followed Rae’s character as she navigated friendships, relationships and career struggles while living in Los Angeles.