Olly Alexander, the star of Channel 4/HBO Max’s It’s A Sin and Years & Years frontman, has denied reports that he is close to being unveiled as Jodie Whittaker’s replacement on Doctor Who.

The BBC is yet to even confirm Whittaker’s departure, though the broadcaster has not denied reports that she is exiting the iconic sci-fi series. Meanwhile, the UK press is already speculating on her replacement, with The Sun on Sunday reporting that Alexander was nailed on for the role.

In its report, The Sun on Sunday said he is “thrashing out final details” with BBC bosses and will be the first gay actor to play the Time Lord, who first landed on British TV screens in 1963. But Alexander’s rep said the story “just isn’t true.”

In a playful statement posted on Instagram, agent Martha Kinn said: “Even though Olly is often contacted by Cybermen, I’m afraid I have to exterminate this speculation. As nice as it is to see interest in this story regenerate, it just isn’t true. As Ood as it might sound, Olly is focusing on his music, for the time being.”

The references to the Daleks, Cybermen, and Ood will not be lost on Whovians. Below is a screengrab of the statement: 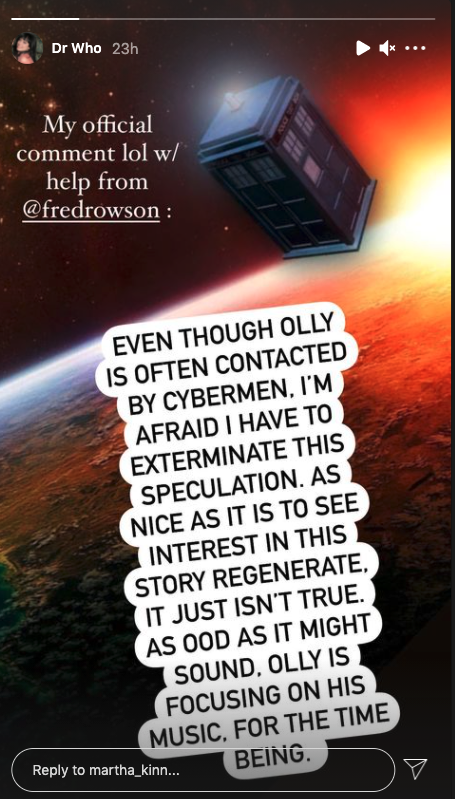 Whittaker’s departure is reportedly being kept under wraps amid production on Season 13. If she does exit the Tardis, it will be in keeping with her predecessors who also completed three seasons before moving on to other projects.