Twenty-four years after claiming an unlikely Atlanta Olympic 1500m freestyle gold, Kieren Perkins admits he still wonders at times how he did it. 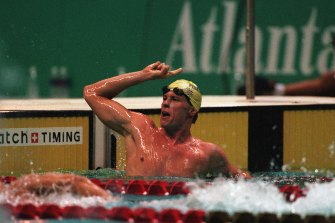 But the swimming great says the self-belief gained from his famous underdog victory from lane eight in 1996 set him up for success in life.

And he believes today's swimmers have the chance to gain similar mental fortitude by tackling the difficulties of the coronavirus shutdown as they readjust to prepare for the Tokyo Olympics in 2021.

Perkins went to Atlanta as the defending Olympic champion in 1500m freestyle but appeared a shell of the man once dubbed 'King Kieren'.

Desperately out of form, Perkins scraped into the Australian team for the longer distance at the selection trials, after failing to qualify for the 400m freestyle despite being the world record-holder.

His fortunes did not look like changing in Atlanta.

Crippled with self-doubt, Perkins was the slowest qualifier for the 1500m final in Atlanta, scraping in by a fingernail – just 0.24 of a second – with teammate Daniel Kowalski the overwhelming favourite to take the title.

History shows Perkins regrouped to dominate the Olympic final from the outside lane in a win that has gone down in Australia's sporting folklore. He swam 14:56.40 – short of his then world record, 14:41.66. Banned Chinese swimmer Sun Yang is the record holder now, with the 14:31.02 he swam at the London Olympics in 2012.

"There are moments when I think, 'Where did that come from?'. It is still hard to believe," Perkins said.

"But there's no doubt when the race is replayed it is goosebumps galore."

Perkins said the lessons learned from Atlanta have helped him deal with the challenges he faced later in life and he said they have been more important than ever during the current coronavirus pandemic. 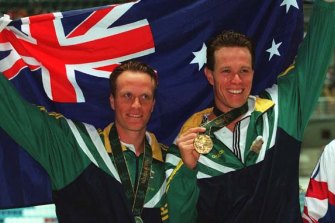 "It's important to remind myself what it was that I achieved from a psychology perspective (in Atlanta)," he said.

"With the stress we are all living in at the moment, being able to focus on the things that you can control and having a balance, staying rational and in control – it is all pretty important.

"That is what I think about when I look back at that (Atlanta)."

"It doesn't matter who you are or what you do, the psychology and ability to get the best out of yourself are all the same," Perkins said.

"It's your ability to understand how you get that from yourself in times of stress. That is the hardest bit for some people to work through but it is in all of us.

"And the athletes, coaches and sports scientists are far more aware of psychology of performance these days than my generation."

Perkins admits it will be tough for swimmers to find a way to stay fit as they try to prepare for the rescheduled Olympics, with pools currently shut due to virus restrictions.

Indeed the 46-year-old says he would have been tempted to retire if the same situation had happened before what became his final Olympics – the 2000 Sydney Games – where he was denied a record third-straight 1500m gold by an emerging Grant Hackett.

"It would have been a question mark definitely," he said.

"You get to a point where your motivation is challenged because you have been doing it for a long time at the highest level.

"There is a limit to how much you are willing to sacrifice to give yourself that shot.

"But I am certainly incredibly thankful that I had the opportunity to go to Sydney because it allowed me to finish up my career and answer all the questions I had about whether or not I could win three in a row."

While the Atlanta win taught Perkins so much, he admitted he could not separate the 1996 victory from his maiden 1500m Olympic gold in Barcelona four years earlier in what was then a world record.

"It is a bit like asking which of your children you love most," he laughed.

"They are both special for their own reasons. I probably look at Barcelona and say that is a better swim, whereas Atlanta was a much better test of character."