Jerry Falwell Jr. resigned as the president of Liberty University on August 25.

The past few weeks have been tumultuous for the evangelical leader. At the beginning of the month, Falwell Jr. took a leave of absence from his post at the university days after he posted and deleted an Instagram photo of himself and a woman with both of their pants unzipped and his arm around her. In a statement to a local Virginia radio station, Falwell Jr. said that the woman was his wife's assistant and the picture was a good-natured, but misleading, joke and apologized for it.

On August 24, Reuters published a report in which a business associate of Falwell Jr.'s claimed to have been involved in a three-way sexual affair with Falwell Jr. and his wife. Falwell denied the claim.

A representative from Liberty University did not immediately respond to Business Insider's request for comment on this story.

Jerry Laymon Falwell Sr. was a Baptist preacher and educator who was deeply involved with conservative politics. 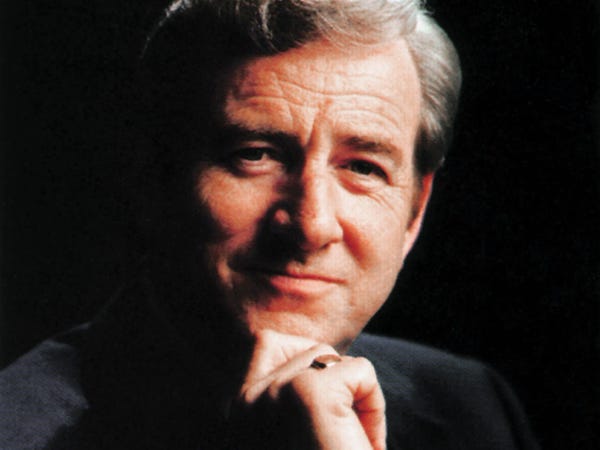 Jerry Falwell Sr. was a lifelong Lynchburg, Virginia, resident. He was born to an atheist father and a staunchly Christian mother.

Falwell Sr. started Thomas Road Baptist Church in 1956 with 35 people. By the time he died in 2007, it had grown to tens of thousands of members. In 2000, PBS Frontline reported that the church was an "$80-million-a-year" ministry.

He was married to his wife Macel for close to 50 years. The couple had three children: Jerry Jr., Jonathan, and Jeannie.

Falwell Sr. was a founder of the conservative group Moral Majority. 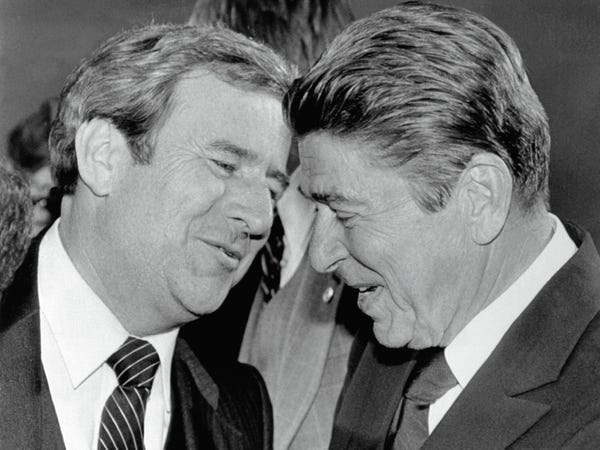 In 1989, The New York Times called Moral Majority "the best-known institution of the religious right" and credits it with endorsing and helping President Ronald Reagan get elected. That same year, the group was dissolved. Falwell said he felt it had achieved its goal of making religious conservative voters more politically active. 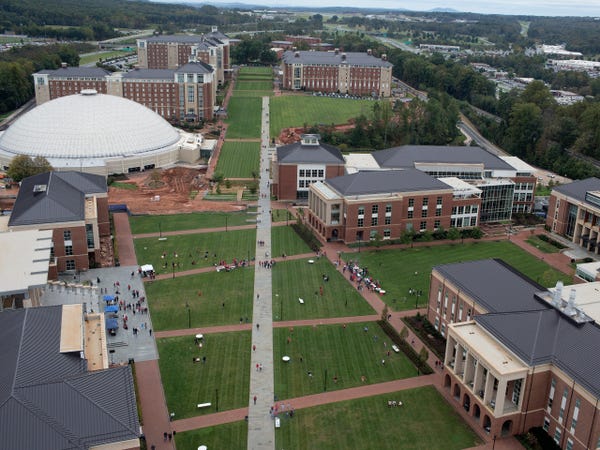 On its website, the university says it has 100,000 enrolled students of which 30,000 are military members and less than 1,000 are international students.

It is one of the largest Christian universities in America, per USA Today.

Many university employees spoke fondly of him in a 2019 Politico story. 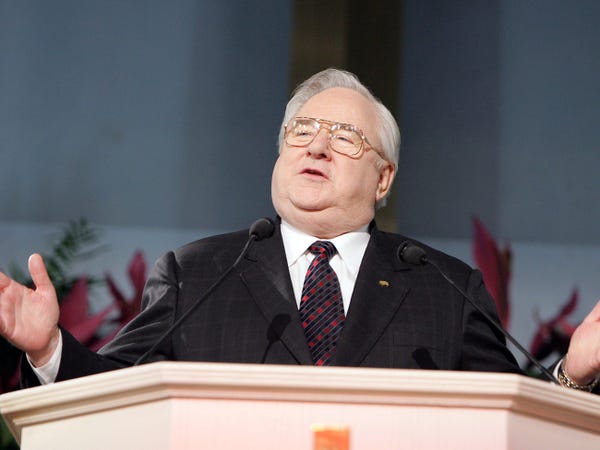 As a Liberty University employee told Politico, "Big Jerry hired people that were smart and capable and put them around himself. He made sure you knew you were appreciated. There was never an ego involved." 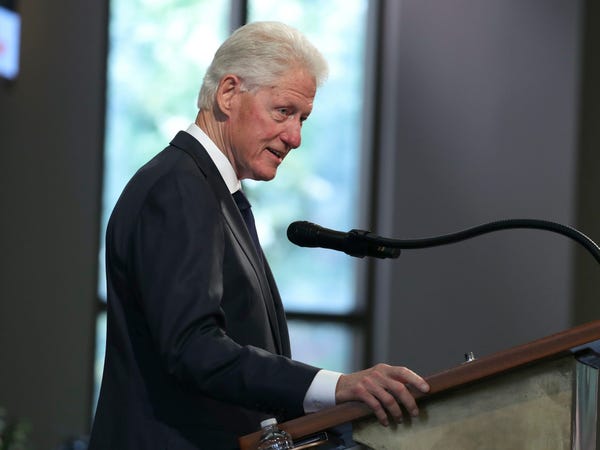 In May 1994, the LA Times reported that Falwell Sr. was selling disparaging videotapes against then-president Bill Clinton. Priced at $43, the tapes contained hefty allegations like sexual assault and murder and had testimonies from various Arkansas residents.

Falwell went on record on CNN in May 1994 to say he didn't have any evidence that supported the claims.

"Is that in a good Christian spirit? I think it's questionable," President Clinton said in a NYT  report from the following month in which he said that Falwell Sr. didn't provide enough background about his accusers. 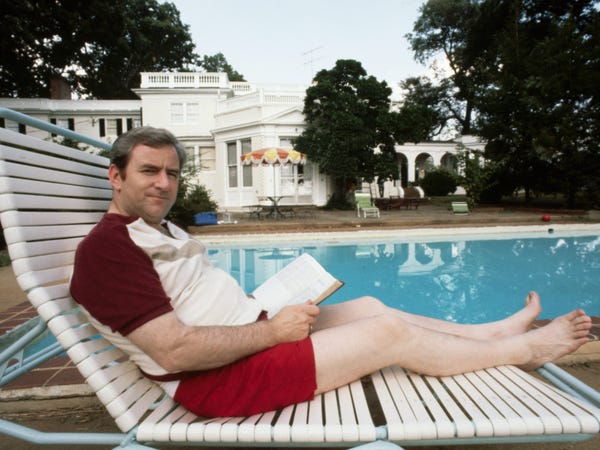 Falwell Sr. started "Old Time Gospel Hour" in 1956. It grew into a nationally syndicated TV and radio program that his son, Jonathan, eventually took over.

Falwell Sr. attracted media attention over the years for controversial comments on topics like sexual orientation, apartheid, feminism, and the 9/11 attacks. 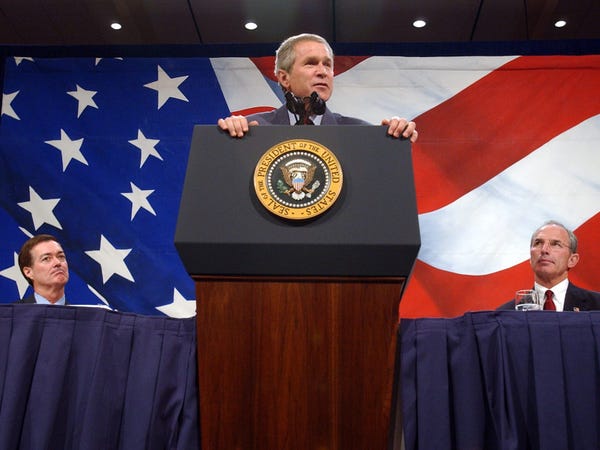 In 1983, Falwell Sr. told followers that "AIDS … is God's punishment for the society that tolerates homosexuals."

Seventeen years later, he compared being gay to having a drug problem and said it was a choice in a PBS Frontline interview.

His 2007 Chicago Tribune obituary noted that he had previously referred to Archbishop Desmond Tutu, who was instrumental in fighting against apartheid in South Africa, as a "phony," and said that feminists "need a man in the house."

Shortly after 9/11, Falwell Sr. went on television to say that the attacks were God's punishment to the US for people supporting abortion access, LGBT folks, and secularity. President George W. Bush called his comments "inappropriate."

Jerry Falwell Jr. took over the reins for the university after his father's death in 2007. 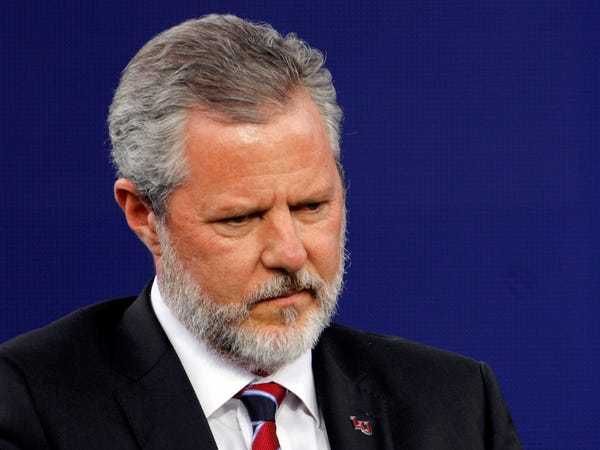 Jerry Falwell Jr. attended both the school and university started by his father before studying law at the University of Virginia.

He's been married to his wide, Becki Tilley, for over 30 years. The couple has three children.

In May 2020, Falwell said he was opposed to wearing a mask to curb the spread of the coronavirus pandemic and instead posted a tweet mocking Virginia governor Ralph Northam and referencing his blackface controversy. 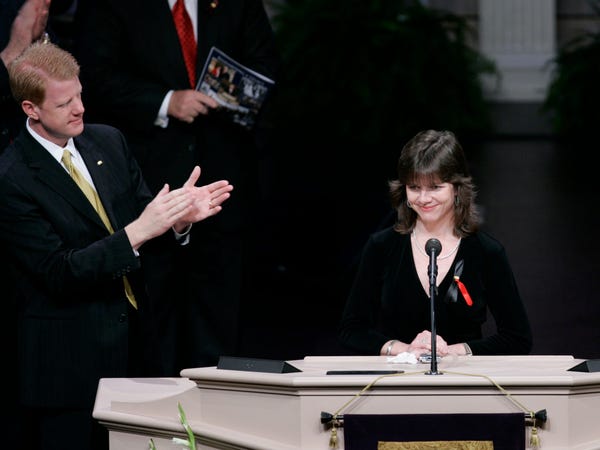 Falwell Jr.'s sister, Jeannie, practices medicine with a focus on laparoscopic and robotic surgery. Like her brother, Jeannie is a graduate of LU. She was named the chief of surgery at the VA center in Richmond, Virginia.

He'd been involved with Thomas Road Baptist Church as a pastor since 2004 before being elected to senior pastor in 2007. He's married with four kids, per his church profile. He frequently tweets about church services.

According to insiders at LU, Falwell Jr.'s tenure at the school was very different from his father's. 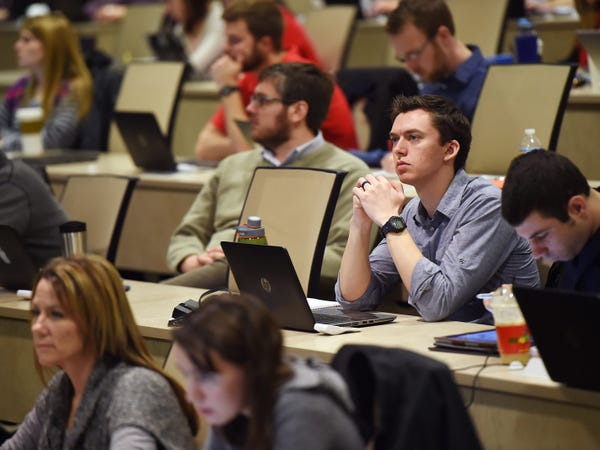 Reporter Brandon Ambrosino spoke to over two dozen people associated with the university for an in-depth Politico story about the culture at LU. They described the institution as more of an "estate hedge-fund" than an educational institution.

The story paints Falwell Jr. as an aggressive businessman and includes accounts of rampant nepotism and blurred lines between personal and university finances.

"Everybody is scared for their life. Everybody walks around in fear," university staff told Ambrosino.

Beyond business tactics, employees shared stories about Falwell Jr. engaging in inappropriate sexual conversations at work. They say he discussed his penis size and forwarded private pictures of his wife to multiple people.

LU brought students back to campus after spring break on March 23 during the coronavirus pandemic. Six days later, a student living off-campus tested positive for the coronavirus, and others showed symptoms of the virus.

In July, News & Advance reported that students returning to campus in the fall won't have to go through mandatory testing. A reopening plan on the school website emphasizes physical distancing and says that at-risk students who are back on campus will have special accommodations.

Falwell Jr. was an early supporter of President Trump's 2016 bid. 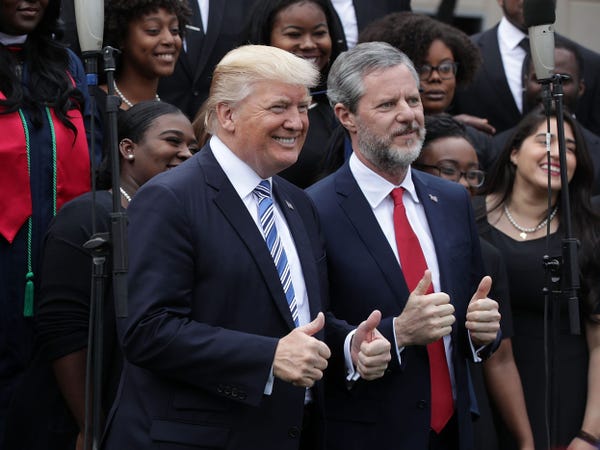 Falwell Jr. spoke at the 2016 Republican National Convention. "Most effective politicians were never career politicians," he said. He went on to call Trump "one of the greatest visionaries of our time."

In 2019, the Wall Street Journal reported that Michael Cohen, Trump's former lawyer, had hired John Gauger in 2015 to sway online polls in Trump's favor. Gauger is the chief information officer at Liberty University and owns Red Finch Solutions, an IT consultancy firm. Cohen said Trump knew about the polls. Rudy Giuliani said Trump did not know about the polls.

On August 25, Falwell Jr. stepped down from his post as president of Liberty University. 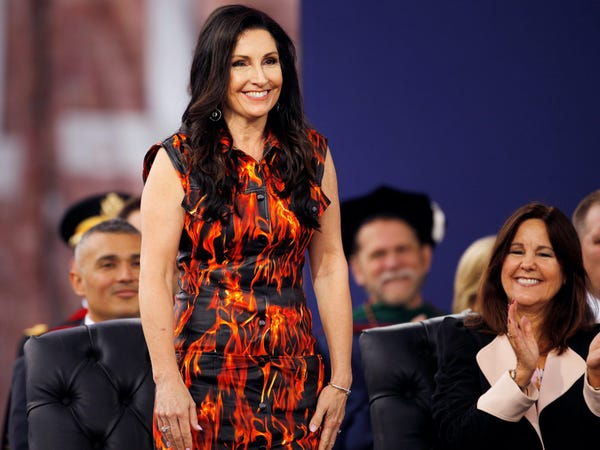 In early August, he posted and deleted a picture of himself and a woman with their pants unzipped and his arm around her shoulder. He said the woman was his wife's assistant and the picture was taken in jest because she was pregnant and couldn't zip her pants so he wanted to show solidarity. He took a leave of absence; Jerry Prevo, a trustee on the school's board, took charge as the interim president.

On August 24, Aram Roston of Reuters published a report in which a Falwell Jr. business associate, Giancarlo Granda, said he had engaged in a seven-year-long sexual affair with Falwell Jr. and his wife that ended in 2018. In the report, Granda claimed that he would have sex with Becki while Falwell Jr. watched.

A lawyer for the couple told Reuters they "categorically denied" the claims. Falwell Jr. told Washington Examiner that Granda and Becki had an affair and the former was trying to blackmail the couple.

After a day of conflicting reports over whether he was leaving the university, news broke on August 25 that Falwell Jr. had resigned.