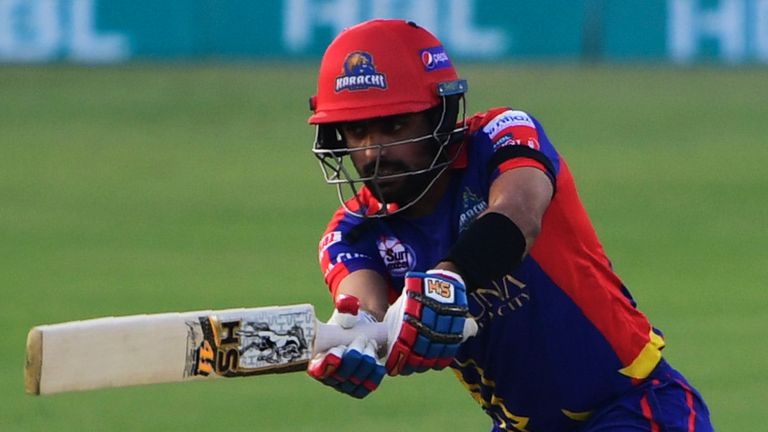 Babar Azam top-scored with 65 as Karachi Kings overcame a late slump to beat Multan Sultans after a Super Over to reach the Pakistan Super League final.

The Kings were the dominant side for much of the game and having restricted the Sultans to 141-7, they were on course for a comfortable win before a collapse of 5-18 late in the chase left captain Imad Wasim needing to hit a boundary from the last ball to force a one-over eliminator.

He did so and a couple of lusty blows from Sherfane Rutherford helped Karachi set Multan 14 to win in the Super Over. Even after a sending down back-to-back wides, Mohammad Amir kept the Sultans to nine in reply and the Kings progress to the final.

Having won the toss and elected to field, Karachi made just the start they were after as, aided by a pair of run outs, they reduced the Sultans to 40-4.

Ravi Bopara led the rebuild and kept the innings together with a composed knock of 40 from 31 balls but when he fell to Waqas Maqsood (2-26), the Sultans were 111-7 with just two and half overs remaining.

Sohail Tanvir thumped two sixes in a quickfire 25 not out from 13 balls to boost the total and then made his mark with the ball, striking early to remove Sharjeel Khan.

However, Babar and Alex Hales put on 42 for the second wicket and even when the former England man was run out, the Pakistan skipper continued on, expertly controlling the chase.

The twist came when Tanvir (3-25) had Babar (65 from 53) caught behind in the 17th over, leading to a startling Karachi collapse. Chadwick Walton fell to balls later, Imran Tahir removed Rutherford in the next over and Wayne Parnell was run out at the start of the 19th.

Amir was dismissed two balls into the last but Imad (27no from 16) had kept the Kings in contention and held his nerve to tie the game from the last ball. Rutherford then hit Tanvir for a four and a six in the Super Over as Karachi made 13-2, leaving Amir to use of all his wiles and experience to seal the win with a boundary-less over.