Kate, Duchess of Cambridge, 39, appeared to mimic her grandmother-in-law Queen Elizabeth II, 95, during a recent royal engagement, a language expert has claimed. The Duchess rang NHS Ward Host, Gimba, whose lockdown portrait was among those featured in Kate’s Hold Still photography project. During Kate’s sweet phone call with the NHS hero, her voice seemed to mirror the Queen’s “sweetly girlish” intonation, an analyst has claimed.

On Wednesday Kensington Palace tweeted an audio clip of the phone call which was shared in full on YouTube.

The tweet read: “Introducing ‘Gimba – The Ward Host’, the fifth of a series of telephone calls that The Duchess held with participants from the #HoldStill2020 project.”

The photograph shows Gimba eating lunch at work and was taken on a difficult day for the frontline worker.

A follow-up tweet added: “On the day the photograph was taken, Gimba had received the terrible news from Nigeria that her mother had fallen ill.” 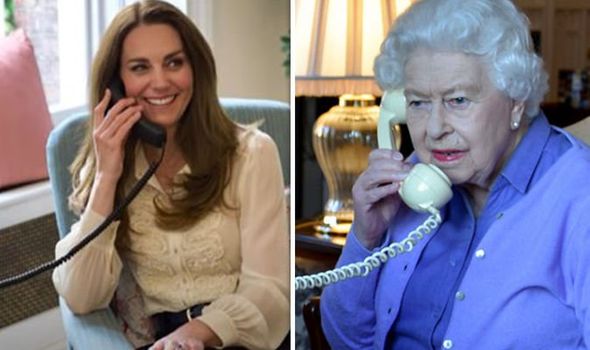 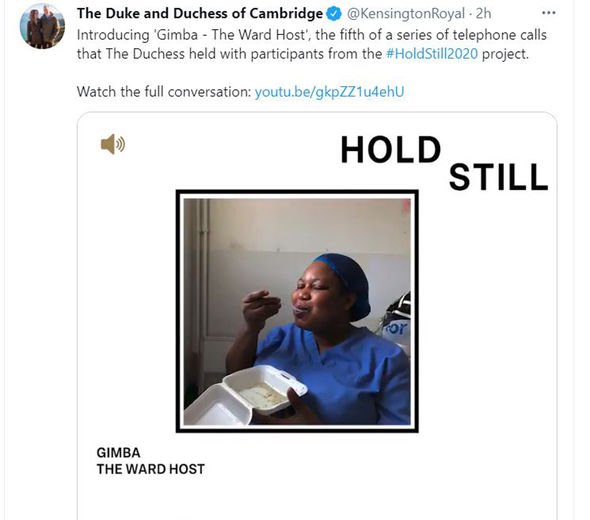 The tweet went on: “She was unable to fly home during the pandemic and declined to take any time off, saying: ‘I have to feed my patients’.”

The post prompted an outpouring of praise from fans many sharing their admiration for Gimba.

One wrote: “Gimba you are an inspiration to so many! Thank you for sharing your story.”

Another put: “Gimba – your generous, kind, warm-hearted soul shines out from your picture!

“I just love that you were chosen to be part of this project.”

While a third chimed in: “Oh Gimba. Everyone loves your photo.

“Echoing the Duchess’s thanks for all you do.

“She’s right, you bring ‘a glimmer of hope.’ Hope your Mum continues to recover and you see her soon.” 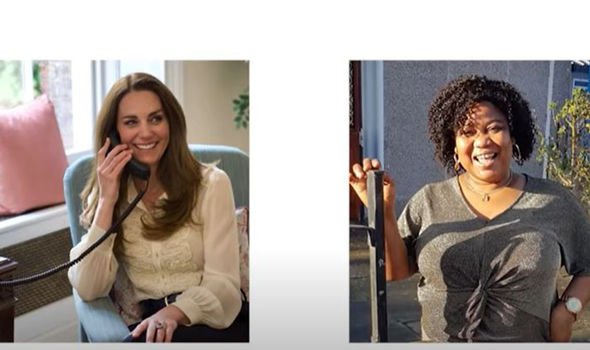 According to the expert, future Queen consort Kate channels the Queen’s manner during the call.

Judi told Express.co.uk: “This was a very lovely and quite long (for a royal) conversation with Gimba that shows Kate using some deceptively complex verbal skills to show genuine interest and respect for the frontline worker while putting her at ease and encouraging her to speak too.”

The expert added: “Kate’s rather high, girlish vocal tone seems to mirror the Queen, whose intonations and tonal pitch still sound sweetly girlish despite her age.”

What is Queen’s Consent? Why are there calls for it to be abolished? [EXPLAINER]
Palace hit backs at racism allegations over historic practices [INSIGHT]
Harry and Meghan’s daughter’s birth announcement to be different [PICTURES]

The Duchess assumes the role of a gushing fan rather than an official royal during the phone call, Judi claimed.

She added: “Kate sounds almost breathless with excitement and admiration at the start of this call, taking the role of fan rather than royal, and this must have made it easier for Gimba to relax and enjoy the conversation.”

The Duchess used a number of tricks to put Gimba at ease during their conversation.

Judi said: “Kate uses a blend of open and closed questions to engage in a reasonably natural-sounding conversation.

“She seems to know when and how to keep talking at certain points but without dominating and the things that she says and the way she refers to Gimba’s work and her friend who took the photo suggests genuine engagement and interest.” 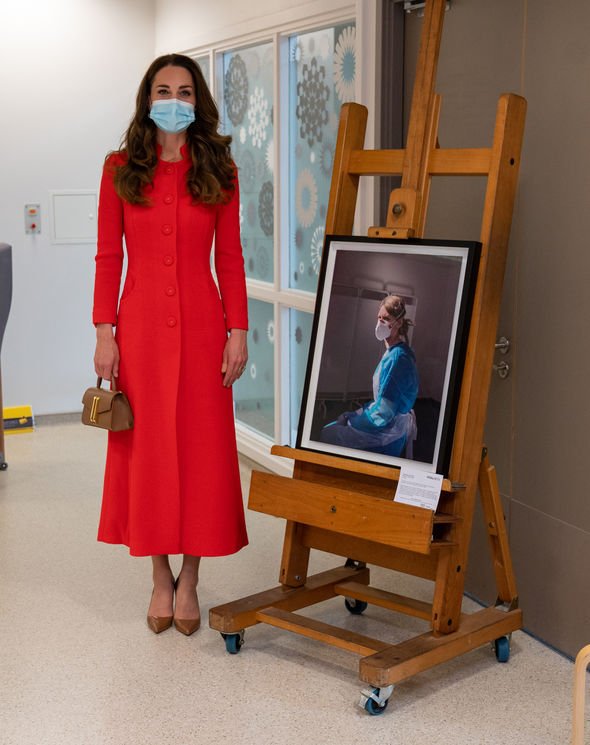 Kate’s admiration for the picture comes through clearly in the call.

Judi said: “It’s clear Kate really has studied and admired this photo as she goes into detail about Gimba’s expression and the food she is eating.”

“Her questions about what other foods Gimba prepares, suggest a genuine desire for information.”

Kate’s conversation with Gimba was longer than usual and may help build public empathy towards her as she prepares to become the future Queen, Judi claimed.

The language expert said: “All royals have set questions they ask on visits but their daily conversations with the public often only amount to a couple of questions.

“Kate shows she can make a much longer conversation both enjoyable and memorable here, suggesting an ability to factor the building of some real empathy and connections with the public into her future role as Queen.”

Related posts:
TV and Movies
'Below Deck Mediterranean' Season 6: Does Chef Matthew Quit Before the Season Gets Started?
32 new Corrie images reveal Gail health tragedy, pregnancy & new factory owners
Britney Spears documentaries: From Framing Britney to For The Record – how to watch in the UK and US
EastEnders spoilers: Mila and Iqra move in together to win custody of Kioni
Recent Posts