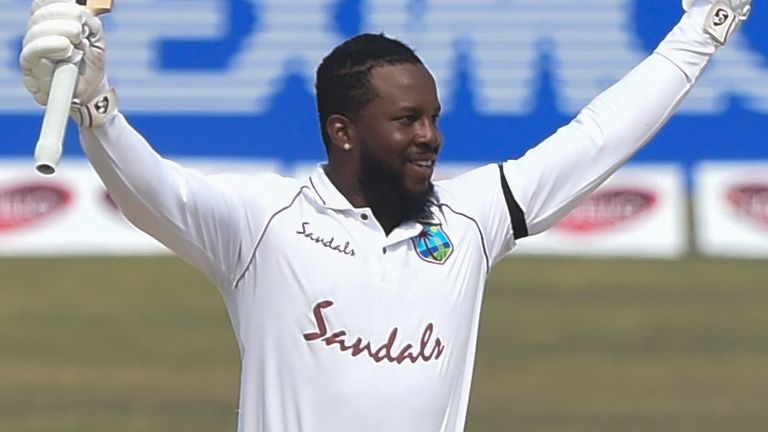 Kyle Mayers made an unbeaten double hundred on debut to help West Indies snatch an extraordinary three-wicket victory over Bangladesh in the first Test on Sunday.

Bangladesh declared on 223-8 in their second innings, setting West Indies a daunting victory target of 395 in Chattogram, but the touring side were indebted to an inspired display from Mayers, as they completed the fifth-highest successful run chase in Test history.

West Indies’ miraculous win marked the highest successful fourth-innings chase since 2008, and the highest made in Asia, made all the more remarkable given their inexperienced line-up.

The visitors were floundering at 59-3, but Mayers added 216 runs with fellow debutant Nkrumah Bonner (86) to turn the match on its head, before sealing a fairy-tale victory for a second-string West Indies side with just 15 balls remaining.

Mayers remained unbeaten on 210 in a remarkable 310-ball innings which featured 20 fours and seven sixes, as he became only the sixth player to score a double hundred in the fourth innings of a test.

The 28-year-old boasted just 32 domestic appearances prior to his Test debut and averaged a modest 29, but he defied the odds by producing one of the great knocks in modern Test history.

He is the first batsman to hit a double hundred in the second innings of his debut Test, which is made all the more remarkable given that he had registered ducks in each of his previous two first-class outings.

“Then to go on and score a century, and then to make it a double, and then going on to win this test – a guy making his debut and making a double should inspire all youngsters to work hard and reach this level.” West Indies have sent a weakened squad to Bangladesh after several players – including test captain Jason Holder – opted out of the tour citing COVID-19 concerns.

They were beaten comprehensively in their three-match ODI series and they appeared poised to suffer a comprehensive defeat in the red-ball format after Bangladesh established a first-innings lead of 171.

Nevertheless, Mayers’ heroics helped the visitors to one of their most unlikely victories in the Test arena, as they prepare for the second and final Test, which begins in Dhaka on Thursday.