Ireland’s Leona Maguire played a stunning starring role on her Solheim Cup debut as Europe claimed just their second victory on US soil in Toledo.

Maguire’s singles victory over Jennifer Kupcho at Inverness Club gave her four-and-a-half points from five matches – a record for a rookie on either side – and provided the ideal springboard for a hard-fought 15-13 success.

Wins for Madelene Sagstrom and Celine Boutier edged Europe closer to their target, along with half points from Anna Nordqvist and Nanna Koerstz Madsen, before victories for world number one Nelly Korda, Brittany Altomare and Megan Khang kept the contest alive.

It fell to Finnish rookie Matilda Castren to make a nerveless up and down from a bunker on the 18th to beat Lizette Salas and make sure the trophy would return across the Atlantic with Emily Pedersen then guaranteeing half a point from the bottom match to ensure outright victory.

Her opponent Danielle Kang won the 16th and 17th and even birdied the last, but Pedersen followed her in to complete the victory in fitting fashion.

“It was a bit of a fight because after 15 I knew we’d won and I just wanted to go celebrate with everyone, so I just really had to collect myself,” Pedersen said. “But it felt really good to hole that last putt. 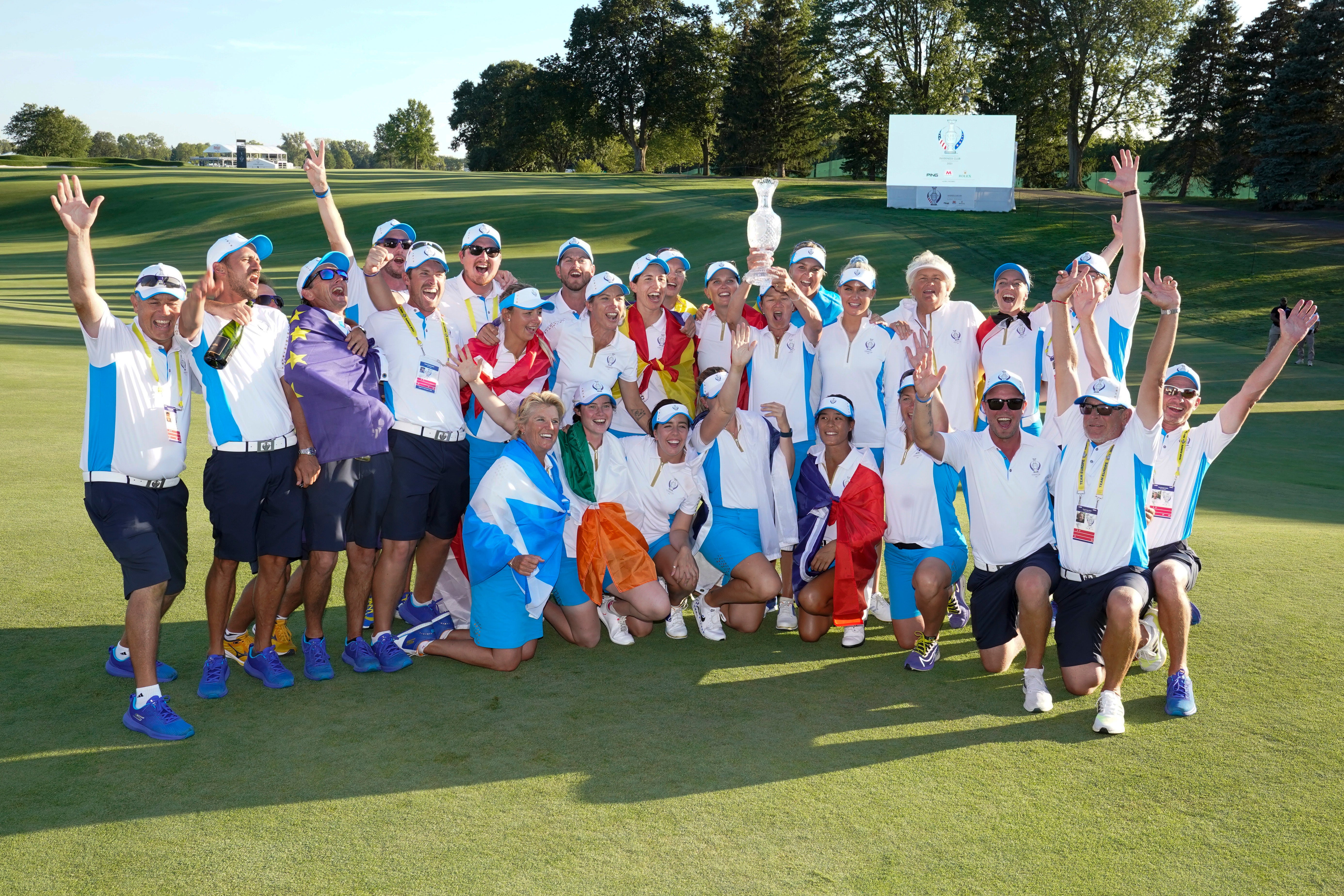 Maguire eagled the second and birdied the fourth, sixth and seventh to take command of her match against fellow unbeaten rookie Kupcho and duly completed a comprehensive win.

The 26-year-old said: “The goal was to get my point, that’s all I can do. I’ve given it my absolute all this week, I couldn’t have given anything more. I couldn’t have asked for a better week.

“Jen is a world-class player. We’ve done battle many times in college. This wasn’t the first, and it will definitely not be the last. I knew I was going to have to play some really good golf to beat her today.

“Got off to a great start; that eagle on two really sort of set me up and I holed some really nice putts, and just really kept my foot down all day.”

Sagstrom put another point on the board for Europe with a 3 and 2 victory over Ally Ewing, a highly welcome win following a controversial incident involving the pair on Saturday.

Ewing was partnering Korda when the latter’s eagle putt on the 13th hole narrowly failed to drop, with Sagstrom quickly picking up the ball and conceding the birdie.

The Swede was deemed to have acted too quickly as the ball was adjudged to be hanging over the hole, with Korda credited with the eagle and the American pair going on to win the match on the 18th. 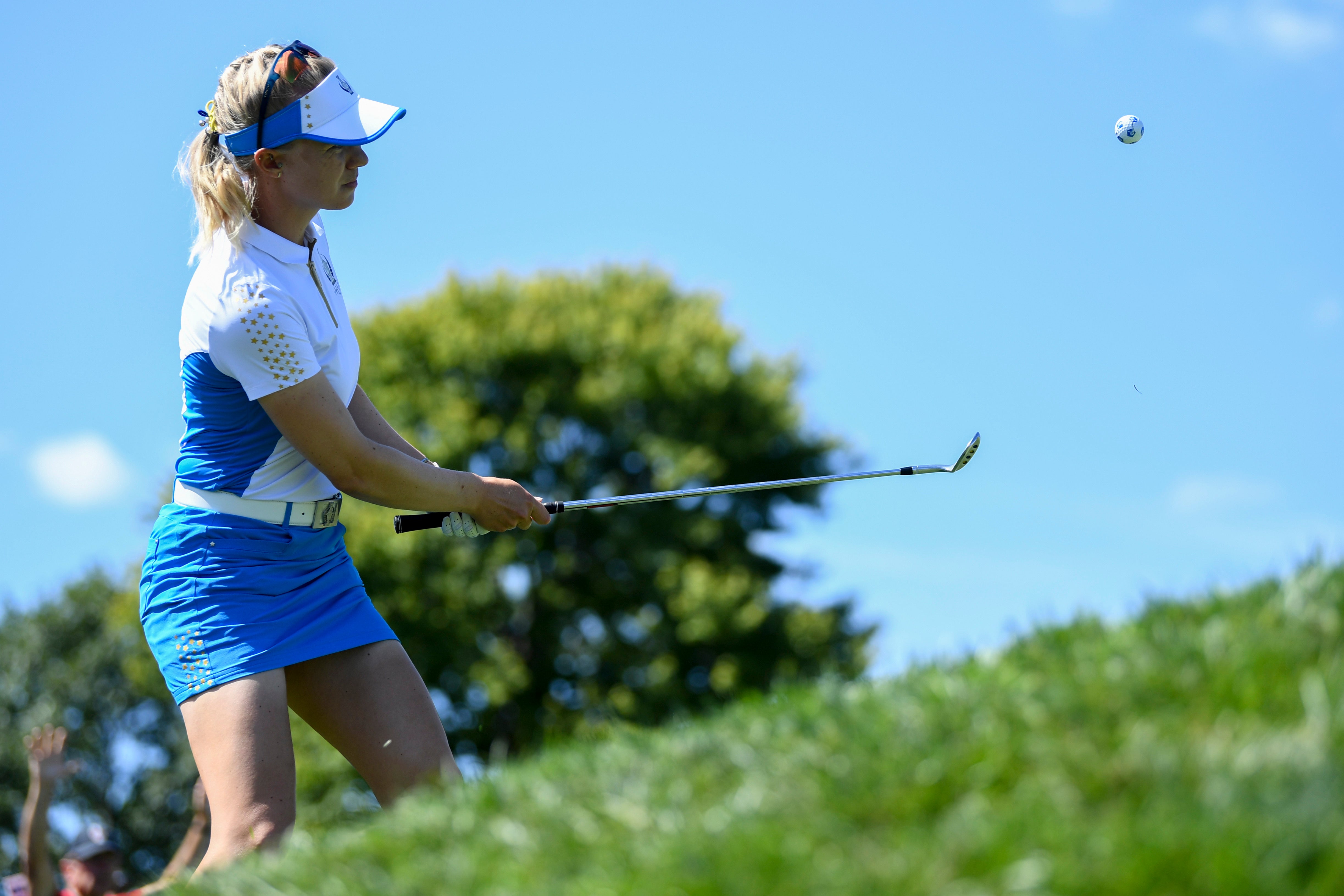 “It’s been a great week,” Sagstrom said. “The team has obviously done amazing. I haven’t really contributed until today.

“Ally put up a really good fight, so we had a really solid game going, and I’m really proud of myself.”

European captain Catriona Matthew who also led the team to victory on home soil at Gleneagles in 2019, paid tribute to her players, adding: “Just an amazing team actually. They came out here and performed.

“I’m kind of lost for words actually at the moment.”

Matthew secured the winning point in Europe’s previous win in America in 2013 but added: “I think it’s even sweeter as a captain actually.

“It’s certainly more nerve-racking watching. It’s all down to the team really, it’s if they play well, so all hats off to them.”

United States captain Pat Hurst was left to rue losing the opening session by three points, adding: “I think we got behind the 8-ball the very first foursomes. It’s still going to be pretty close, but it’s not good enough.

“I was hoping to see a lot of red in the beginning (today) just to kind of put it up on the board for everyone to see, but it is what it is. They played hard, they played with heart, and that’s what we were asking for.”