One of those women targeted, Boothby MP Nicolle Flint, says she never felt so unsafe as during the five-month campaign against her. She has spoken out publicly since the election about the bullying, abuse and misogynistic vandalism she experienced during that time. 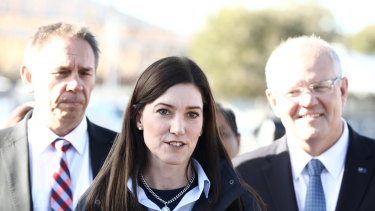 Liberal MP Nicolle Flint on the campaign trail with Scott Morrison during the 2019 election, when she was subjected to a bullying campaign.Credit:Dominic Lorrimer

But GetUp denies teaching volunteers the bird-dogging techniques and insists it had no connection to a man accused of stalking Ms Flint.

South Australian Liberal Tony Pasin used a committee inquiry into the election to accuse GetUp of weaponising individuals to act against politicians the organisation disagreed with.

"You come into communities, you razz people up, you train them in arts like bird-dogging and then you step back and say oh they're not members of ours," he said during a committee hearing on Monday.

"It was in fact GetUp's irresponsible incitement and promotion of bird-dogging that led directly to the stalking activity and the vicious nature of the campaigns targeted towards Nicolle Flint in Boothby and Georgina Downer in Mayo … You irresponsibly incited people to stalk female Liberal candidates."

GetUp's chief legal counsel, Zaahir Edries, described what the organisation did as empowering people to engage with democratic processes.

"To suggest we somehow deliver some nefarious training to people that they are going to go out and do some horrible things is really disingenuous," he told the committee.

The practice of bird-dogging – named for the animals used to hunt game – involves intercepting candidates and asking them questions while filming their response. Mr Pasin described it as hounding or pursuing someone with malicious intent.

Ms Flint told the committee hearing GetUp's volunteers on polling booths in particular were very aggressive and doing things like "putting the phone in your face to record you when they put questions to you".

She also described a community candidates' debate that was a long tradition in the South Australian seat of Boothby and was usually a calm and polite affair.

"This time, I was being shouted down, I couldn't finish my sentences," she said. "It was no longer a community debate, it was a debate that had been hijacked by activists who just wanted to intimidate me."

An anonymous submission to the committee from a person describing themselves as "a disenchanted and former GetUp volunteer" talks of being asked to be part of a bird-dogging team for the organisation to "disrupt, both physically and verbally, Liberal Party public meetings and events".

"The bird-dogging team also had access to enormous, paper mache-like caricature heads of major Liberal Party members … designed to be used in conjunction with defamatory signage [and] handheld, portable loud speakers as well as yelling and chanting," the submission states.

Mr Edries and GetUp's political director, Andrew Blake, denied the organisation asked its members to engage in any hounding or malicious pursuits of people. They spoke instead of people dressing up in Bananas in Pyjamas suits or children's entertainer Peter Combe singing songs at campaign events.

Our weekly newsletter will deliver expert analysis of the race to the White House from our US correspondent Matthew Knott. Coming soon. Sign up now for the Herald‘s newsletter here, The Age‘s here, Brisbane Times‘ here and WAtoday‘s here.