MAKING pizzas for the whole family has just become easier, as Lidl is bringing back its pizza stand that lets you cook FOUR at once.

The nifty innovation means there's no need to juggle several shelves in the oven at a time as you can easily just pop the stand in. 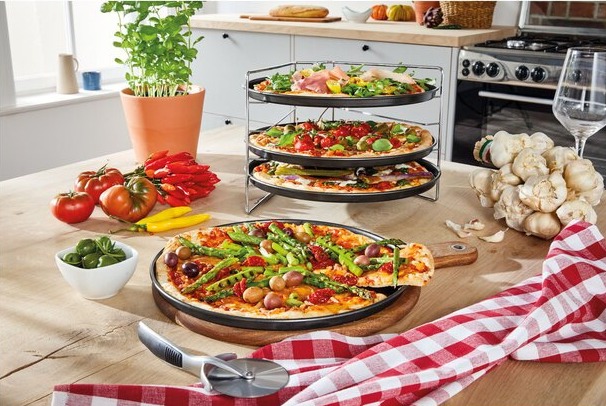 And when the rack has cooled down it's great for serving up the slices too.

The set comes with four baking trays and a fold-away frame, so you can easily store it in the cupboard whenever you're not using it.

Each baking tray measures 29cm, while the frame has a height of 20.5cm.

Spotted by Facebook page Bag a Weekly Bargain, the pizza stand will land on Lidl store shelves this Thursday, June 4.

It was last sold at Lidl in June last year.

If you want a pizza the action (get it?), then it may be best to act fast as the stands are only available as long as stocks last.

Of course, only pop by the supermarket if you're also buying essentials at the same time.

Lidl has more than 760 stores across the UK. You can find your nearest one by using its store locator tool.

If you miss out, Amazon is selling a similar stand with four trays for £18.90.

While OnBuy.com is selling a set with three trays for a cheaper £15.99.

It came a couple of weeks after Aldi brought back its BBQ pizza oven both online and in stores.

Aldi has also brought back its sell-out £350 hot tub – and you can order it online.