Live music venues and bars in Melbourne nightlife hotspots like Fitzroy, Collingwood, Richmond and Abbotsford are calling for their local council to help them financially amid the coronavirus shutdown.

A group of live music venue operators in the City of Yarra has written to the council to ask for a bailout, saying state and federal government packages have not helped them enough. 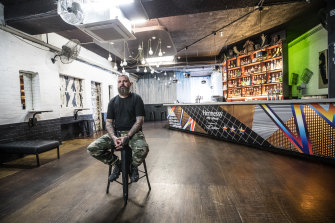 There has been some payroll tax relief for these venues but the owners say their turnover is not large enough to qualify them for other government stimulus.

"None of these incentives have done anything for us," Mr Barrett said.

"We don’t have any bottle shops or kitchens in our venues. All well and good being told to change our business model, but when you could be closed for six months, it doesn’t help.

"A huge amount of stock came in two days before we closed. You’re sitting on tens of thousands of dollars of stock. Yes, we can sell it later but we have still got to pay for it now."

Laundry closed two weeks ago; Mr Barrett's other two venues closed this week. He has temporarily laid off 60 staff.

"We hope we can get them back on but at the other end there’s going to be huge re-training having to hire new people because some will move on," he said.

The submission to council – written by Collingwood's Bendigo Hotel owner Guy Palermo and signed by Mr Barrett and John D'Alessandro, owner of The Evelyn and Workers Club – says the future of live music in the municipality depends on council support.

"Only with the help of the City of Yarra, can live music venues stay live. If we close, all those years of experience, network, brand and reputation will be lost and may never be recovered to what it was only a month ago," Mr Palermo wrote.

"It is eerie to drive past band posters promoting live acts that are no longer playing. Let us not allow Melbourne to become a ghost of its former glory."

City of Yarra councillor Stephen Jolly will push for payments to live music venues and bars. He says the municipality is the live music capital of Melbourne, more so than St Kilda or the CBD.

"We are hopefully going to start putting our hands in our pockets," Cr Jolly said.

"This would be money well spent for probably the number one industry, in terms of what stays here, in the City of Yarra: the nightlife economy."

A council spokeswoman said the urgent needs and challenges of the whole Yarra community was understood by the council.

"As a matter of utmost urgency, council is exploring how we may be able to mitigate some of the COVID-19 impacts," the spokeswoman said.

"We are working closely with state and federal government agencies to support and advocate on behalf of our community.

"Council is expecting to make an announcement over the coming days.”