Now that LVMH Moët Hennessy Louis Vuitton has completed its acquisition of Tiffany & Co., trust that luxury titan Bernard Arnault will take the necessary time and resources — financial and human — to catapult the iconic jeweler to the pinnacle of the sector.

The LVMH chairman is famously patient and determined, and freeing Tiffany of the scrutiny of quarterly financial performance gives him and his executives the ability to balance short-term initiatives with his long-term vision.

On Thursday, Arnault appointed a trio of LVMH executives — including his 28-year-old son Alexandre and Michael Burke, one of his most accomplished and trusted deputies — to lead the storied American brand, effective immediately. The third link in the chain is Vuitton executive Anthony Ledru, who has been named Tiffany’s chief executive officer after a career mostly in the U.S. jewelry business.

Bernard Arnault was expected to welcome 14,000 new employees to his luxury empire this morning, addressing the whole of Tiffany & Co. via video during a virtual town hall meeting.

According to sources, Anish Melwani, CEO of LVMH Inc. (North America), is to moderate the online gathering, with speakers including Chantal Gaemperle, the group’s executive vice president of human resources and synergies, and outgoing Tiffany CEO Alessandro Bogliolo, who has agreed to stay on until Jan. 22 to ensure a smooth transition.

Alexandre Arnault and Ledru are also expected to speak live and field questions from staffers.

In a welcome letter dispatched to all Tiffany employees on Thursday, Ledru asserted that the jeweler’s “potential ahead is limitless, and I am convinced that we will seize it together.”

“Joining LVMH will allow us to advance Tiffany’s strategy in a real and meaningful way,” Ledru wrote. “LVMH brings a unique and unparalleled know-how and ecosystem of retail excellence as well as resources that will help us accelerate Tiffany’s brand sophistication in a disruptive way across the product, communication and retail spheres.”

Beyond its financial might and management braintrust, the world’s largest luxury group has global expertise in real estate, retail development and CRM, gleaned from some 75 brands and 160,000 employees across fashion and leather goods, wines and spirits, perfumes and cosmetics, selective retailing and hospitality.

As reported, Alexandre Arnault, CEO of Rimowa since 2017, is leaving the luggage-maker to become Tiffany’s executive vice president, product and communications, lending his strong digital acumen, Millennial perspective, marketing and branding know-how, and network of connections in Silicon Valley.

Burke, chairman and CEO of Louis Vuitton, was named chairman of the Tiffany board of directors, bringing his extensive experience and strong track record in luxury to the task.

It is understood the new Tiffany board will include LVMH executives from headquarters and the North American division.

LVMH is also expected to make further executive appointments at Tiffany in the coming months in order to achieve its ambitions.

Bogliolo and Krakoff were widely expected to exit once the transaction was finalized on Jan. 7. The management swap doesn’t come cheap.

According to a regulatory filing on the deal, Bogliolo’s golden parachute — or payment tied to an exit following a takeover — was valued at $48.4 million in cash, equity and prerequisites. Krakoff’s package was said to be of similar size, although the paperwork doesn’t single out his compensation specifically.

WWD had identified Ledru as a frontrunner in a report on Dec. 30, and signaled that Alexandre Arnault was also in the management frame.

Ledru is currently Vuitton’s executive vice president, global commercial activities. The Frenchman has logged most of his luxury career in the U.S. jewelry business, rising through the ranks at Cartier over a 12-year-career to become vice president of retail until moving over to Harry Winston as global vice president of sales in 2011.

In fact, Ledru first joined Vuitton as president and CEO of its North American business in December 2014 from Tiffany & Co., where he spent a little under two years as senior vice president, North America, which is Tiffany’s largest market, generating about 43 percent of sales.

The tall, suave executive is said to have played a key role in spearheading Vuitton’s unique approach to customer experiences, and shaped the voice and strategy of the megabrand in North America and at headquarters.

Ledru said he is “delighted to rejoin Tiffany, the most iconic American luxury brand which I have long admired.”

“The inclusiveness and optimism upon which Tiffany was founded resonate now more than ever. I also come back to a maison that is at the forefront of the environmental and sourcing standards in its industry,” he added. “Going forward, I have deep confidence in LVMH’s commitment to protect the brand, drive its growth strategy and apply the highest standards of retail excellence to Tiffany.”

Indeed, LVMH is expected to spiff up Tiffany boutiques and rethink the in-store experience; renew its product range across the jewelry, accessories, fragrance and watch categories, and rev up communications to express the brand’s blend of heritage and modernity. 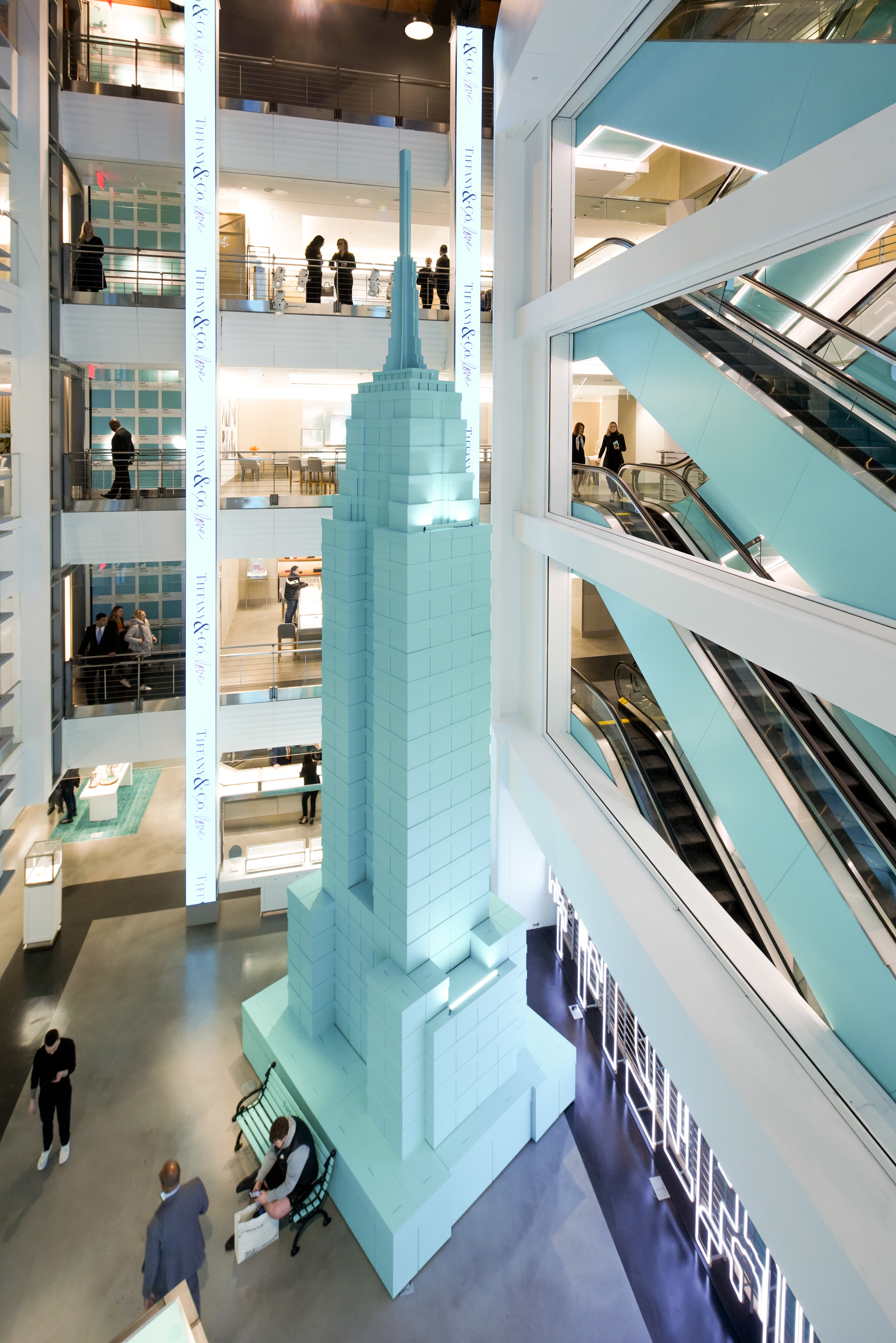 In a statement, Bernard Arnault struck a warm and bullish tone: “We are committed to supporting Tiffany, a brand that is synonymous with love and whose Blue Box is revered around the world, with the same dedication and passion that we have applied to each of our prestigious maisons over the years.

“We are optimistic about Tiffany’s ability to accelerate its growth, innovate and remain at the forefront of our discerning customers’ most cherished life achievements and memories. I would like to thank Alessandro Bogliolo and his team for their dedication to Tiffany and their work over the past three years, especially during this challenging period,” he added.

LVMH has a strong track record of grooming executives and recruiting from within whenever a big role opens up, rarely poaching from luxury rivals for CEO roles. The current CEOs at Dior, Fendi, Givenchy and Loewe, for example, all rose through the ranks of either Dior or Vuitton.

To wit: Separately on Thursday, LVMH promoted Rimowa executive Hugues Bonnet-Masimbert to succeed Alexandre Arnault at the management helm of that brand.

Installing Alexandre Arnault at Tiffany also reflects widening responsibilities for Bernard Arnault’s children, and echoes Delphine Arnault’s role as executive vice president of Louis Vuitton, in charge of all product-related activities. Antoine Arnault, CEO of Berluti and chairman of Loro Piana, last year added oversight of LVMH’s environmental department, in addition to his role as head of image and communications at the group, while Frédéric Arnault, the youngest executive in the Arnault clan, became CEO of Tag Heuer last year.

Before joining Rimowa after initiating and leading LVMH’s acquisition of the German firm, he worked at consultancy McKinsey & Co., then in private equity at KKR, both in New York. He then joined LVMH and Groupe Arnault to focus on digital innovation.

To be sure, LVMH will move quickly to grow Tiffany, which it contends has underperformed in a buoyant consumer segment.

Founded in 1837 by Charles Lewis Tiffany and catapulted to a higher plane by his son Lewis Comfort Tiffany, the jeweler has served the wealthy — both old and new money — ever since it was established. As of the end of March 2020, it operated 326 stores worldwide.

LVMH first agreed to buy Tiffany for $16.2 billion in November 2019 in what was billed as the largest acquisition in the luxury space. But that was pre-pandemic.

After the coronavirus began making its way around the globe, causing mass shutdowns, LVMH seemed to get cold feet. Last September, the French group said it was walking away from the deal, sparking a war of words and multiple lawsuits that threatened to derail the mega deal.

But by October, the parties reached a truce in order to avoid legal proceedings seen as harmful to both sides. At the end of 2020, Tiffany shareholders overwhelmingly approved an updated acquisition agreement calling for a $131.50 in cash per share purchase price, compared with the original offer of $135 a share. That amounted to about $420 million in savings for LVMH.

Despite an uneven performance earlier in 2020, Tiffany’s earnings shot up in its most recent quarter, which ended Oct. 31, by 52 percent to $119 million, beating out analyst expectations. E-commerce sale were up 92 percent during the quarter.

Among Ledru’s first challenges will be to galvanize Tiffany employees behind LVMH’s ownership and strategy, and smooth over any lingering acrimony among top brass who didn’t head for, or asked to head for, the exit.

Bogliolo joined Tiffany from Diesel in 2017 and sought to boost growth in China and through omnichannel initiatives while also raising average unit retail prices and accelerating product innovation.

Bogliolo and Krakoff were key in helping turn around the plodding Tiffany, modernizing the company with a focus on China, elevating the brand and expanding with The Blue Box Café, three distinct high-jewelry collections, and Tiffany Paper Flowers, which runs from fine to high jewelry.

It is understood that Krakoff is not being replaced, but that the company would operate with different design studios for different categories in keeping with how many of LVMH’s other powerhouse businesses operate.

Erceg, the CFO, told employees late Wednesday that he would leave with the change of power.

The leadership team walking out of Tiffany managed to steer the company through the pandemic — and through the bruising court battle with LVMH that ultimately led to a price cut in the deal.

While the springtime COVID-19 shutdown hurt Tiffany, the company was bouncing back in the third quarter and for the last two months of the year posted a 2 percent gain in net sales — marking the brand’s best holiday sales haul ever.

“It was an honor to receive the baton from Mike Kowalski in 2017 and it has continued to be a privilege since then, filled with great challenges and invaluable rewards,” he wrote. “I am convinced that the Tiffany community is the most precious gem of this extraordinary jeweler, and I wanted to take this time to thank you all for your unwavering dedication and commitment to our legendary brand.”

Bogliolo said he met Ledru recently and “I am confident that his deep knowledge of jewelry, including Tiffany, and of the luxury sector at large will be instrumental in achieving long-term success.”

“I am very excited for what you will accomplish next with LVMH, and with great fondness I will be cheering you on,” he added.