Labor’s clearing of the policy decks this week was hardly unexpected. Having already abandoned its franking credits policy that would have raised $55 billion, it has now dumped its bid to restrict access to negative gearing and reduce the capital gains tax concession.

There is more to come. With Labor scrapping its major sources of new revenue, it is expected to jettison its multibillion-dollar spending promise on free cancer treatment and dental care for pensioners. It is backing the Coalition’s stage 3 tax cuts for high-income earners despite its criticism that they were unfair. For a party that boasts of its commitment to a “progressive and sustainable tax system”, the cost to the bottom line (expected to hit more than $184 billion by 2031-32) must have been a hard pill to swallow. 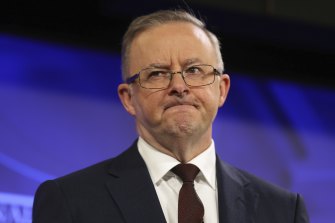 The changes are a sign that Labor leader Anthony Albanese is hell-bent on dumping any baggage that may provide the Coalition with fodder for a future election scare campaign. That was made clear when he told his shadow cabinet that any future policies must be developed through a “clear-eyed lens of winning the next election”, not how the party would like to address all current issues.

It has been a tough lesson for Labor to learn. The party went to the last election believing it had a winning platform committed to an agenda of redistribution, with no shortage of winners and losers. It was a spectacular failure, and Labor’s third election loss in a row.

That searing experience has led Mr Albanese to move Labor onto safer ground as Australia heads towards the next election, expected early next year. The unpredictability of the pandemic means a win is no sure bet for either side. At the moment, Prime Minister Scott Morrison is struggling in the polls on the back of a slow vaccination program, but in another six months it could be a different story. A population mostly vaccinated, an economy back on the road to recovery and an end to lockdowns could result in voters swinging back to the Coalition.

While the Labor leader has wheeled out new commitments on such things as childcare and social housing, his slimmed-down policy platform will struggle to set the agenda. This is being exacerbated by Labor having to hedge its bets on climate policy in an attempt to woo back voters in coal mining seats of northern NSW and Queensland.

As a consequence, those waiting for a political party to offer up a platform of much-needed reforms to turbocharge Australia’s economy post-pandemic will be in for some frustration. After failing dismally to push through changes on industrial relations, Mr Morrison has all but given up on major economic reforms, instead focusing on social policies such as in the areas of aged care and mental health. While they are much needed, without an equivalent agenda to increase revenue and boost productivity enormous pressure will be placed on an already stretched budget.

With both parties retreating to a low-risk policy agenda, the government’s response to the pandemic will be front and centre during the next election. While that is probably as it should be, it is disheartening to see that Labor and the Coalition are bypassing the mantra that you should never let a good crisis go to waste.

Gay Alcorn sends an exclusive newsletter to subscribers each week. Sign up to receive her Note from the Editor.